When Toyota debuted their GR010 Le Mans Hypercar, they knew their team would be the only one in the FIA World Endurance Championship with a new car designed by a major manufacturer for the rule set. It made them the heavy favorite in every race they entered.

Despite some concerns about overall pace against the LMP2 class in the first two races of the season, the team eventually backed those expectations up by winning all six races comfortably.

The last two, both at Bahrain in back-to-back weekends, capped off that season. Last weekend, their Le Mans-winning No. 7 of Kamui Kobayashi, Mike Conway, and Jose Maria Lopez took the win. Today, their No. 8 of Sebastian Buemi, Brendon Hartley, and Kazuki Nakajima matched the feat in an effortless 1-2 overall finish. The Alpine-run, grandfathered-in Rebellion LMP1 car finished in third in both races, while the two Scuderia Cameron Glickenhaus entries skipped both races.

The runner-up finish in today’s race makes the trio of Kobayashi, Conway, and Lopez world champions. Next year, they will defend that title against a new full-time ByKolles privateer hypercar program and what will be at least a part-time entry from the Peugeot 9X8 program announced earlier this season. In 2023, the class will explode in size, and Toyota and Peugeot will suddenly face competition from Porsche, Audi, and Ferrari, plus potential entries from confirmed IMSA programs by Acura and BMW.

In LMP2, Team WRT’s Le Mans-winning trio of Robin Frijns, Ferdinand Habsburg, and Charles Milesi took their third consecutive win to secure their own championship. That Belgian program is rumored to be connected to Audi’s 2023 LMDh entry, and next year it will fight directly with a Team Penske LMP2 entry known to be a warm-up for that team’s partnership with Porsche in 2023.

The GTE-Pro title was contested, but the protest later rejected. AF Corse and Ferrari driver Alesandro Pier-Guidi was told to give back the race lead after contact with the No. 92 Porsche with fifteen minutes remaining in the race. He did not do so before the Porsche stopped for a final splash of fuel. The no-call gave Pier-Guidi and teammate James Calado a championship over Porsche’s No. 92 pair of Kevin Estre and Neel Jani.

AF Corse’s win and championship in GTE-Am was far less contentious. Their No. 83 of Nicklas Nielsen, Alessio Rovera, and Francois Perrodo won by over a lap, securing a title after that car’s fourth win of the season. 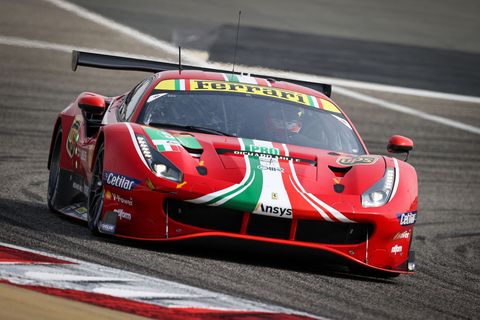 The FIA World Endurance Championship returns next season with the 1000 miles of Sebring, the first-ever race for Hypercars on U.S. soil. Starting in 2023, those LMH-spec cars will be eligible to compete in IMSA competition.