The Day After: 8 Big Stories From Motul Petit Le Mans

There was a little bit of everything in the last major sports car race of the season, the Motul Petit Le Mans, held at Michelin Raceway Road Atlanta on November 13 as the finale for the IMSA WeatherTech SportsCar Championship. Crashes, close passes, passes that weren’t that close, and a lot of tight racing.

Here are eight things we learned:

It was a horrible crash – Jordan Taylor in his Corvette C8.R running nearly full speed into the back of the stationary Grasser Lamborghini Huracan—a five-car melee just a little more than four hours into the 10-hour race that looked as bad as it was. The wreck happened as the field was forming up to take the green flag, but some cars were accelerating while others were riding the brakes to make sure they didn’t run over the cars in front, which is exactly what happened. Taylor said he was full throttle, trying to catch up when he crested a hill and found he had nowhere to go. He hit the brakes, slowing to perhaps 115 mph for an impact so hard he thought he broke his back.

“Thankfully, Corvette, Chevrolet and Pratt Miller built a very strong car that kept me safe. It’s definitely a scary moment when you come over the crest in fifth gear and everyone stops on the other side. It’s something we can learn from in the future on restart procedures,” Taylor said. “This was the first time I’ve had a big crash in an event… we’re a family of racers, my dad and my brother. It’s the first time one of us has had a big accident.

“It’s always a fear for a family member to get injured. I knew Ricky was in the 10 car and when I walked over the wall, my first thought was that he was going to drive by this mashed car and he’d be looking for a thumbs up. I knew he’d be freaked out, so it was an emotional moment to be honest. It brings a lot of things back into reality. You’re on track racing these guys and wanting to beat everyone. But as soon as an accident happens, it becomes a lot more human and brings that back into the big picture. So I want to say thank you to everyone on the team for the safety and the IMSA safety team, as well.”

Everyone walked away from the crash, including Michele Beretta in the Lamborghini. 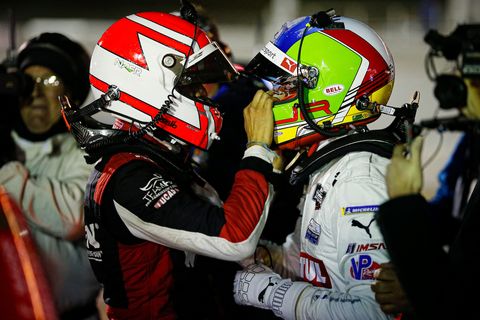 2. Hail Marys are Fun, Even When They Don’t Work

“I knew he was going to try something,” said Felipe Nasr, driver of the No. 31 championship-winning Action Express Whelen Cadillac. “He” was Ricky Taylor (brother of Jordan Taylor), piloting the family No. 10 Wayne Taylor Racing Konica Minolta Acura. And what he tried, at the end of the very last lap, was a bold and possibly ill-considered trip through the grass and gravel to momentarily pass Nasr, which would have meant the Taylor team would win the championship, because it had to beat the Whelen team for that to happen. It didn’t, but it was fun to watch, and a tip of the gimme cap to Ricky for going for it. 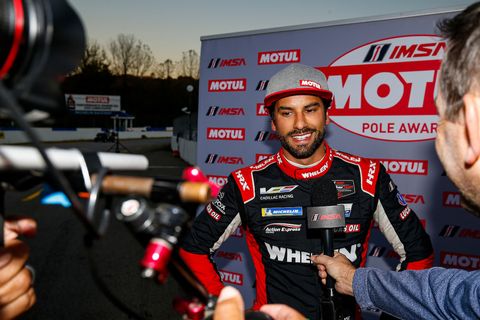 This was Nasr’s last ride in the No. 31, to be replaced by Tristian Vautier next season. But expect to see him back soon, as he is rumored to be headed to a team building LMDh cars for 2023.

It’s difficult to be objective about Mazda’s implosion in the Motorsports world. Yes, the MX-5 Cup remains as the race series for the Miata, but the company’s utter dominance of the grassroots racing world was something that should have been the envy of every mainstream manufacturer. It was an enormous family, connected by the love of a brand that loved its family members back. It can be argued that Mazda should never have gotten into Prototype racing, that it had little to sell that would be influenced by success—or years of failure, as it turned out—of a Prototype car. But Mazda persevered and spent millions it didn’t have until it finally started winning. And it still won, taking the overall victory in Petit Le Mans, in a car that carried signatures of everybody who worked on the car, and a sign that saluted Mazda fans. And now it’s over, and the brand won’t be back, saying it won’t field the new LMDh car that debuts in the 2023 season, So long, Mazda, it (finally became) fun while it lasted. 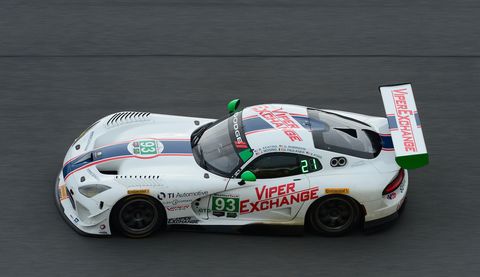 Gar Robinson’s Riley Motorsports, pictured above, team won the race and the championship, but it wasn’t as easy as it sounds, given the fact that this is the first year that the Prototype series has been allowed to run on the big stage, instead of being relegated to sprint races on Friday or Saturday when nobody’s looking. Their presence is one reason IMSA was able to produce a 43-car field for Petit; they were arguably added as field-fillers last January but have proven themselves as a worthy class that should continue. With essentially a spec chassis and a spec V-8 engine, it’s a good way to dive into Prototype racing for new teams.

6. … But It Makes For a Lot of Confusion

Having three Prototype series—the king, Daytona Prototype; the queen, LMP2, and the prince, LMP3—that all look essentially alike is a moderate barrier for novice fans to understand and appreciate the sport. It’s hard to explain that they aren’t all racing each other, but within their given class, and while IMSA has tried things like different lighting to differentiate the classes, it’s still confusing, especially at night. And especially when the LMP2 cars, which are supposed to be noticeably slower than the king Daytona Prototypes, aren’t anymore – the LMP2s were running 1-minute, 10-second laps to the DPi’s 1-minute, 9-second laps. 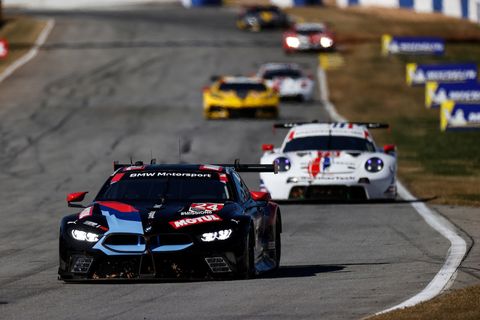 It’s long been an issue that the GT Le Mans cars look a lot like the GT Daytona cars; it’s confusing to tell a newbie that those BMWs and Porsches are different from these BMWs and Porsches. Next year, that confusion will ramp up when the GT Le Mans class goes away, replaced by making the GT Daytona class ProAm. Suddenly these Porsches are indeed identical to those Porsches, except that these cars have an all-pro driver lineup, and those cars don’t. Yes, two classes, but the same car, the same name. IMSA could really use a good way to tell the Pro cars from the Am cars (though they may still have a Pro driver in the cockpit, and the Pro cars might still have an Am driver or two; good luck making that into a bite-sized explanation).

…IMSA had a safe, solid season, and addressed the ProAm aspect of the GT classes as best they could, given the fact that the GT Le Mans class often had just three cars – the two Corvettes and a mostly privateer Porsche. The LMDh (that stands for Le Mans Daytona hybrid, BTW) will be a home run, keeping most all the current manufacturers (except Mazda) engaged, and attracting some new carmakers, like BMW, back to the Prototype world. The 2022 season will be a bit of a lame duck year as we await the LMDh cars in 2023, but there’s no reason to think IMSA won’t showcase racing that is just as good as it was this year. 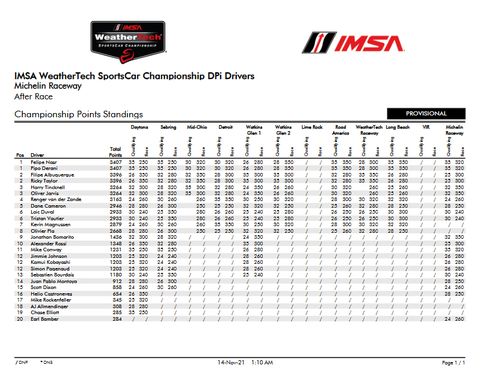