Honda secured a front row lockout for the second round of the 2020 SUPER GT season at Fuji Speedway, as Tomoki Nojiri took pole for the ARTA squad.

After qualifying second to the best of the Toyota GR Supras three weeks ago during the opening round, Nojiri went one better this time around at the wheel of the #8 Honda NSX-GT with a 1m27.300s laptime at the end of the 10-minute pole shootout.

That was enough to beat Koudai Tsukakoshi in the #17 Real Racing Honda by 0.159s.

However, ARTA only barely qualified for Q2 as Nojiri’s teammate Nirei Fukuzumi just scraped through Q1 in eighth place after a Turn 1 lock-up.

Both the #8 and #17 Hondas are benefitting from the weight handicaps this weekend, with ARTA carrying only 6kg of ballast after finishing eighth in the season opener and the Real car carrying none at all after failing to score last time out.

By contrast, all five of the Bridgestone-shod Toyotas are carrying ballast this time around following their lockout of the top-five in the opener.

The lightest of those, the #39 SARD machine, was third-fastest and best of the non-Hondas in the hands of GT500 rookie Sena Sakaguchi, 0.429s off the pace.

Sakaguchi, who is standing in for the absent Heikki Kovalainen at SARD, narrowly outpaced the best of the Nissan GT-Rs, the #12 Impul car of Daiki Sasaki in fourth.

Nissan’s flagship Michelin-shod NISMO car was fifth-fastest with Ronnie Quintarelli at the wheel, best of the non-Bridgestone cars and within half a second of pole.

Completing the Q2 order were Yuhi Sekiguchi in the #36 TOM’S Toyota, carrying 30kg of ballast, the #100 Team Kunimitsu Honda of Naoki Yamamoto (10kg) and the best of the Cerumo Toyotas, the #14 machine of Sho Tsuboi (22kg).

The #37 TOM’S car, carrying 42kg of ballast after its victory in round one, was eliminated in Q1 with Ryo Hirakawa qualifying 10th behind the Yokohama-shod Mugen Honda.

In GT300, pole position went to the #6 Inging Motorsports Toyota 86 MC of Kazuto Kotaka, who set a time of 1m36.270s in the car he shares with Ryohei Sakaguchi. 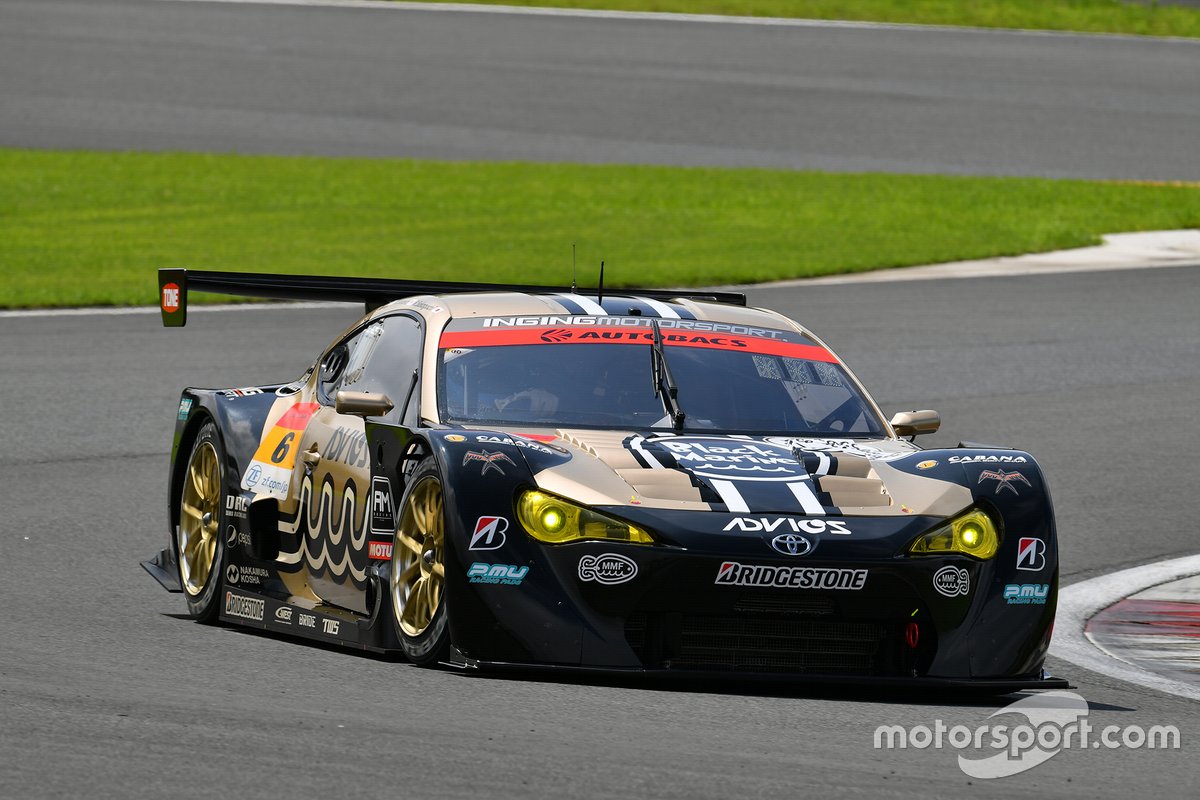 Super Formula driver Toshiki Oyu fell only 0.108s short in the #55 ARTA Honda NSX GT3 to take second, while Hiroki Katoh made it two ‘mother chassis’-based cars in the top three in the #2 Cars Tokai Dream28 Lotus Evora MC, which had topped its Q1 group earlier.

The works R&D Sport Subaru BRZ also topped its Q1 segment but had to settle to fourth ahead of the LEON Mercedes-AMG GT3 that took pole for the Fuji opener three weeks ago.