The Nashville Fair Board of Commissioners received its most thorough pitch from Speedway Motorsports Inc. yet over sound mitigation for a renovated Nashville Fairgrounds Speedway but is still seeking additional information over logistics and financing.

Speedway Motorsports is working towards securing a lease from Nashville Metro to operate the historic city-owned short track. If successful, the company intends to renovate the speedway with the goal of hosting NASCAR Cup Series events for the first time since 1984. 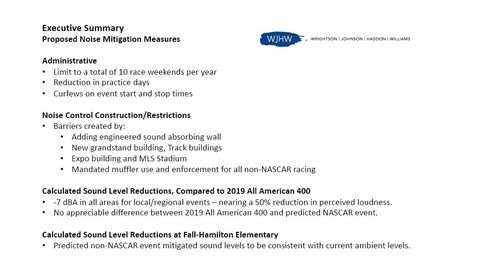 Jack Wrightson, an internationally sound engineer contracted by Speedway Motorsports to work on the Nashville Fairgrounds project, made a presentation to the Fair Board on Tuesday that his firm concluded would reduce racing noise by 50 percent (-7 dBA) for 9 of the 10 planned annual events.

The bulletin delivered to Fair Board members this week says speedway improvements would slightly reduce sound in some areas, increase it in others, but would not be louder than the 2019 All-American 400 in any case.

The latest proposal from SMI includes 10 race weekends per year, a reduction of testing days and curfews for all racing events. During the previous fair board meeting in May, SMI proposed a 10 p.m. curfew for monthly regional events and 11 p.m. for NASCAR.

To reduce sound, Speedway Motorsports has proposed a sound barrier that rises 20’ above the top of the banking in the corners but also concedes that the barrier would not enclose the entire racing surface.

The barrier would be built from a similar composite as a freeway sound walls with concrete, sheet rock and gypsum.

Fair board commissioner Jason Bergeron — the most vocally critical and inquisitive of his peers 00 still wanted additional information on how the decibel level conclusions were reached. Additionally, he is still pushing Speedway Motorsports Inc. for a conclusive number of testing days.

That number is currently 25 under pandemic protocol, and these are mid-week testing days that allow regional Late Model teams to turn laps in advance of race weekends or provide track time to younger drivers.

Bergeron says the track rentals are not significant revenue generators, while also generating noise that is disruptive to the neighboring community and elementary school.

Specifically, Bergeron said he would be open to trading fewer testing days for more race weekends. The examples he provided were as follows:

“It’s a commitment to the community that we’re willing to make the track less disruptive,” Bergeron pled.

Bergeron has earned a reputation as being anti speedway or anti NASCAR and he addressed that perception on Tuesday.

“I may not be the right messenger and I appreciate that,” Bergeron said of his questions about speedway renovation. “But I would appreciate the board talking about these areas, because this is the only time we can talk, and it’s just been really hard to get information.”

One of those topics includes just how much private money Speedway Motorsports is agreeing to put into track renovations. Bergeron said SMI could save itself the debate and scrutiny by simply agreeing to take on all the debt currently held by the speedway portion of the fairgrounds property.

During the May meeting, Bergeron pressed Caldwell on the cost, suggesting that he read that it would take levels of $61 million, $77 million or $91 million to get the speedway to reach the various intended standards, but Caldwell never confirmed any figure.

“There’s really as many figures as you want,” Caldwell said last month. “It’s Nashville’s facility. We’ve done some provisional modeling with the engineers on what that would look like, but we’ve started to bring those number down.”

During the public hearing portion of the May meeting, Caldwell refused to address specific questions from Bergeron regarding anti LGBTQ+ legislation working its way through the Tennessee political apparatus.

To some, it was interpreted that Speedway Motorsports Inc. was unwilling to take a stand for that community but this sentiment was addressed on Tuesday by City Councilman Zach Young — a member of the LGBTQ+ caucus within the Nashville City Council.

“I’m aware that at the public hearing, the character of leadership at SMI and Bristol Motor Speedway was perhaps questioned by a member of the board,” Young said of Bergeron.

“While I greatly appreciate interest in this important topic, because I’m always glad to have allies in the fight for equality and continuing equality, let me assure each and every one of you that Bristol Motor Speedway and NASCAR as a whole is committed to diversity and inclusion — which includes and is not limited to LGBTQ+ folks like myself.

“I have spoken extensively to Jerry Caldwell about this and I’m convinced he is strongly with us on that.”

Young also voiced support for the Latter of Intent signed by SMI and Nashville Mayor John Cooper and urged the council to give racing the same diligence it gave the Major League Soccer stadium built next door to the track.

The perception is that Bergeron fast-tracked soccer but has obstructed racing when presented similar concerns about noise, traffic and logistics.

“I hope we continue to view it as a landmark facility and treat it as such,” Young said, “and recognize that Bristol Motor Speedway is a tremendous organization that would allow us to enhance this landmark with their tremendous track record of success at their other facilities. …

“I urge the Fair Board to not take steps that would intentionally hurt the potential of this opportunity for success.”

“The speedway is not going away. That’s not a conversation that we, the city, are having. The discussion is, can we count on Bristol Motor Speedway to restore and maintain the speedway in a way that reduces the current financial risk.”

That message landed on its intended target.

“Thank you, Councilman Young for your time and I’m looking forward to meeting you for the first time rather than being addressed by you in a meeting as the first time we’ve ever spoken,” Bergeron said.

“With all due respect to Councilman Young, I found his comments to be unfortunate and a little insulting and a little loaded with a lot of legal conclusions that METRO legal might disagree with,” Bergeron said.

The current timeline calls for a resolution to come by July 12 when the contract will be considered and possibly voted upon. Bergeron opposes that timeline for consideration and a final vote. The next meeting is that scheduled July meeting.

When Speedway Motorsports entered into a letter of intent with the City of Nashville, it came with a provision that an agreement needs to be finalized by July 31 or either party can walk away from it.

Bergeron wants additional public hearing and more concrete details from Speedway Motorsports. It’s unclear if that timeline will hold regardless of Bergeron’s opposition to it.

NASCAR will return to the Nashville market next weekend with a triple-header weekend at Nashville Superspeedway in nearby Lebannon.

“That’s a different company,” Caldwell said of Dover Motorsports. “I would expect that race to continue. It’s not uncommon for NASCAR to host multiple races in the same market. There’s two races in the Dallas Fort Worth market and another nearby in Austin. This would be similar to that.”

Should the vote pass the Fair Board, whenever that vote is taken up, it would then need to be voted upon by the Nashville City Council and approved by Mayor Cooper. At that point, SMI would become the new lease holder of the Fairgrounds, subject to the Fair Board charter and the provisions agreed upon before the Fair Board vote.