Lewis Hamilton will start Formula 1’s Sprint in Sao Paulo on Saturday at the head of the field, with arch rival Max Verstappen for company alongside on the front row of the grid.

That’s the good news for Hamilton.

Now, for the other side of the coin.

That situation will not be replicated for the start of the F1 Brazilian Grand Prix on Sunday, regardless of whatever happens in the 24-lap Sprint Qualifying race on Saturday that will determine pole position and starting grid.

That’s because a new engine for Hamilton means he will start the main event from at best sixth on the grid as he’ll be taking a five-place grid penalty in a very inopportune time in a tight championship battle. Verstappen already leads Hamilton by 19 points with four races remaining in the season. 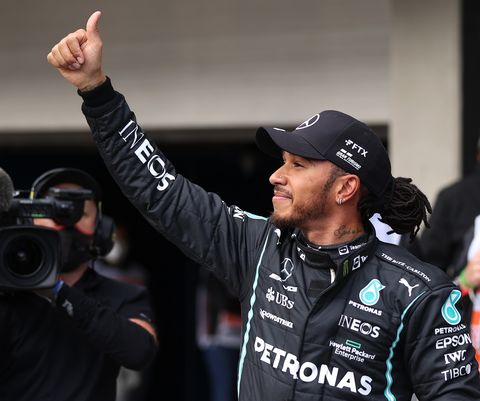 Formula 1’s power units are made up of six separate elements and drivers are restricted in the number of each that they can utilize through the course of a season. Mercedes has suffered from more issues this year than rival Red Bull, which is powered by Honda, and this is concentrated on the Internal Combustion Engine, of which three are allowed each season.

Mercedes, as with other power unit manufacturers, has had to weigh up reliability against performance through the second half of the season. Hamilton’s Mercedes teammate Valtteri Bottas took on an entirely fresh power unit in Italy and Russia and moved onto his sixth ICE of the year in the United States.

Hamilton incurred a 10-place demotion in Turkey when his car was equipped with a fourth ICE and had hoped to avoid another sanction. But on Friday Mercedes fitted a fifth ICE to his W12 prior to practice at Interlagos and as per Formula 1 regulations this comes with a five-place grid penalty.

The penalty will be applied following the conclusion of Saturday’s 24-lap Sprint race, the outcome of which sets the grid for Sunday’s 71-lap grand prix. Hamilton was dominant in Friday’s qualifying session, which determines the grid for Sprint, as he classified almost half a second faster than Verstappen, his speed aided by the fresh engine. But even if Hamilton finishes first on Saturday he will drop to sixth on the grid for Sunday’s grand prix.

“It was a really good qualifying session, I am super happy with it,” said Hamilton. “We’ve got the penalty but we will give it everything we’ve got.”

“When they take a new engine naturally they have a bit more power for a weekend so for me it’s not a big shock,” added Verstappen.

There are 107 points still up for grabs; 29 are available this weekend at Interlagos, with 26 at each of the following three rounds in Qatar, Saudi Arabia and Abu Dhabi. Hamilton is chasing what would be a record-breaking eighth world title while Verstappen is seeking his maiden championship trophy. Verstappen has won the last two races in the United States and Mexico City.

“Well without going into specifics, every engine is degrading,” said Mercedes boss Toto Wolff to Sky Sports F1, explaining the extra ICE for Hamilton. “We have seen that in the past years over 1000km [of usage] there is a certain amount of kilowatts the engine is degrading. Ours is just degrading much more than the average of the past few years and that increases from weekend to weekend so if we kept the [same] engine we would for sure not be competitive in Saudi and Abu Dhabi.”

The situation has certainly surprised Honda. It took on a fourth power unit for both Verstappen and Checo Perez earlier in the year – though that was down to crashes damaging the engines. Without those shunts it believes it would have been penalty-free. And it is not expecting any more penalties.

“I am very surprised they are changing the ICE frequently,” said Honda engine chief Toyoharu Tanabe-san of rival Mercedes. “Actually I cannot believe what is going on. From the PU manufacturer point of view it is kind of disappointing to get a PU penalty for the driver.”