IndyCar Series Will Open 2022 Season In Feb. For First Time Since 2004

The NTT IndyCar Series unveiled its 2022 schedule Sunday ahead of its final race of the season in Monterey. The 17-race schedule will see the earliest start to the season since 2003 and its first start in Feb. since 2004.

The 2022 campaign will start Sunday, Feb. 27 on the Streets of St. Petersburg, and finish at Laguna Seca on Sunday, Sept. 11. The visit to Texas Motor Speedway will move to March, but unlike this past season there will only be one race. The Detroit Grand Prix at Belle Isle will also lose one of its two races.

Iowa Speedway gets a doubleheader on the same weekend, and after being cancelled due to COIVD this season, Toronto is back on the schedule. Although NASCAR has yet to reveal its 2022 Xfinity schedule, IndyCar will race on the Brickyard Road Course on July 29, a day before the NASCAR Cup series races at the same track (that schedule was released this week). That mirrors this season so expect a NASCAR doubleheader weekend again, though a few weeks earlier.

14 events will air on the NBC broadcast network, 2 on the USA Network while Peacock Premium, NBCUniversal’s streaming service will have 1 race and live coverage of all 17 races in addition to practices and qualifying. 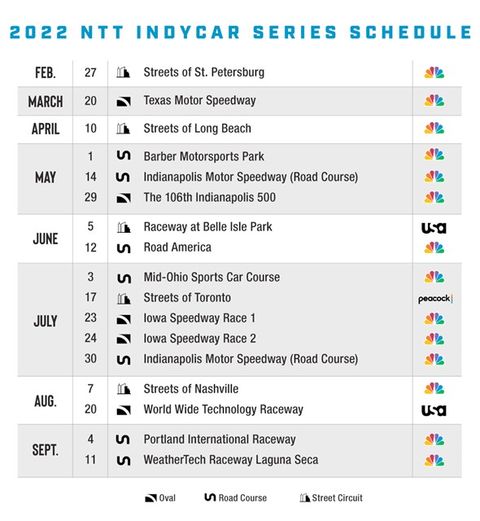