Formula One’s 71 years as a continuous championship has produced some pretty dramatic happenings over the decades. Loads of them tend to center around classic title fights, like the time the 1981 championship came down to a race of attrition in a Las Vegas parking lot, or famous duels like Senna versus Prost, Hunt versus Lauda. This is no different in 2021, because a points battle that didn’t look like it could get any closer a few weeks ago actually has, and it will come down to the final lap of the final race of F1’s longest ever season.

This weekend, Yas Marina will host the Abu Dhabi F1 Grand Prix and finally bring down the curtain on a gruelingly long calendar. Continent-hopping triple headers, endless off-track bickering between teams and the FIA, and in true 2021 style, even Megan Thee Stallion have all made headlines this year—as well as a whole host of fresh problems like sprint qualifying, a four-hour-long two-lap “race,” and tracks no one had even seen the blueprints for at the start of the season. All of this has amounted to Lewis Hamilton and Max Verstappen heading to the season finale with 369.5 points each.

Verstappen could have sealed the title in Jeddah if he’d outscored Hamilton by 20 points to become F1’s 34th champion, as well as its second youngest, behind Sebastian Vettel and ahead of Hamilton himself. But he didn’t. 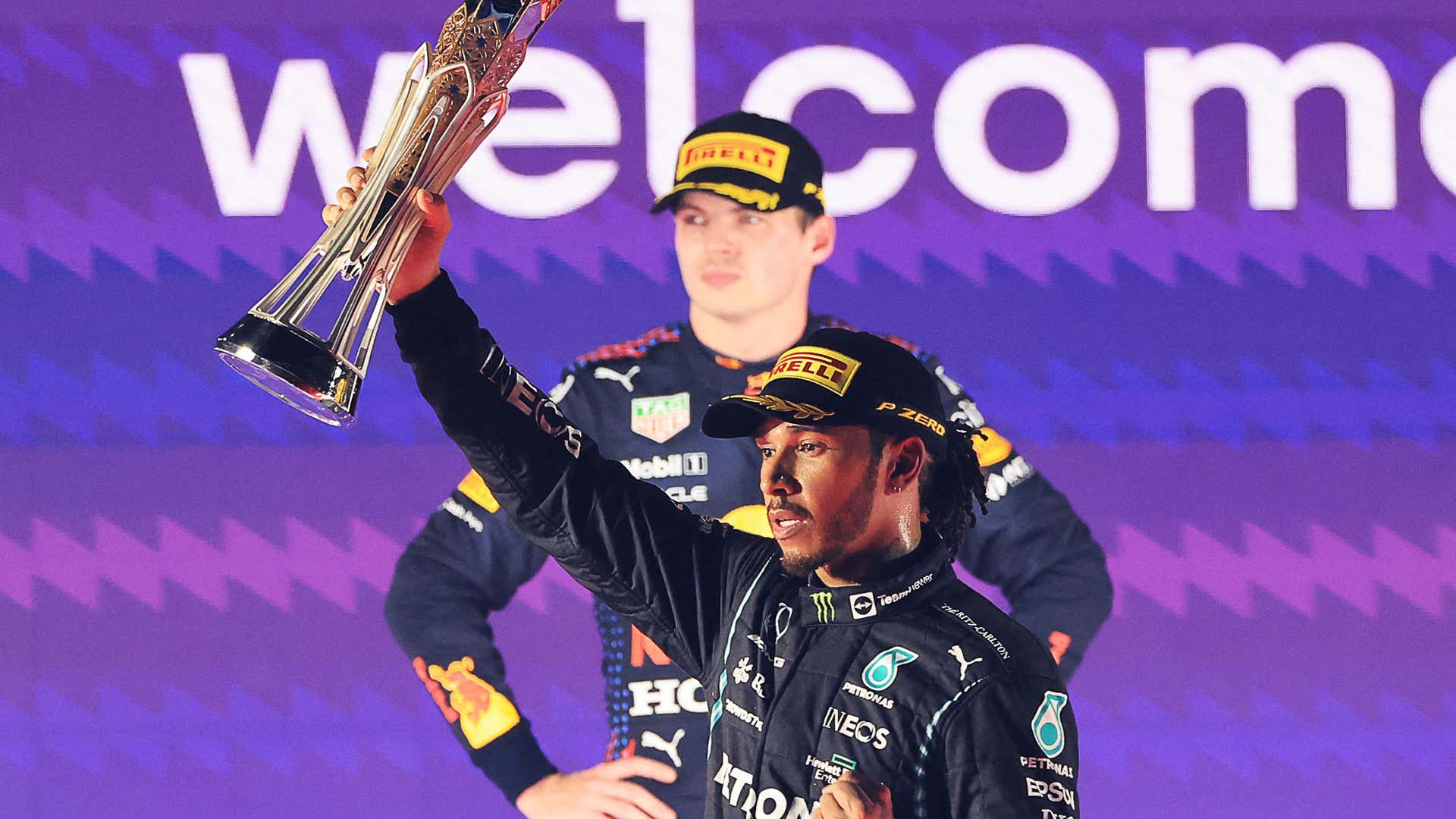 This season has been a rollercoaster. Hamilton won the first race of the year for the first time since 2015 and took the top step in Bahrain after that, which inevitably gave the Mercedes driver an early lead that he held onto through the Emilia-Romagna grand prix, coming out of Imola just one point ahead.

Verstappen couldn’t catch him in Portugal or Spain but managed to reverse a 15-point deficit. Neither scored points in Azerbaijan, Verstappen due to a dangerous tire blowout, and Hamilton due to fumbling a button after a red-flag restart—an extremely unusual mistake from a normally virtually flawless driver.

Then Verstappen won the French Grand Prix, which somehow wasn’t a snoozefest despite being at Paul Ricard, and two races at the Red Bull ring gave the home team enough wings that the young racer was ahead by 32 points before Silverstone—where the two rivals collided for the first time. The crash left Verstappen’s car as an ugly piece of bent metal and the duo caught up in an ugly war of words. Social media abuse led the FIA to finally ask “fans” to stop being racist to F1’s only black driver, and Red Bull tried to demand a harsher penalty by getting their reserve driver to recreate the incident, sensibly denied.

From there, a tense battle turned harsh. In Hungary, a multiple-car collision almost took Verstappen out of the race, and a genuinely bizarre switch between wet and dry on a red flag restart put Hamilton in first place. Belgium didn’t really happen on any level, due to extremely heavy rain and Verstappen came out of it with a half points.

Verstappen reinforced his lead with an emphatic home win at Zandvoort before the two rivals crashed again at Monza, with Verstappen’s car ending up literally on top of Hamilton’s head.

The Russian Grand Prix gifted both drivers points from late-race rain, with Verstappen recovering after being forced to take grid penalties, and Hamilton passing Lando Norris for the lead when the McLaren lost hope of staying on track. Valtteri Bottas woke up from a season-long jag of depression to win the Turkish Grand Prix but Verstappen’s podium was enough to re-take a six-point lead from Hamilton. 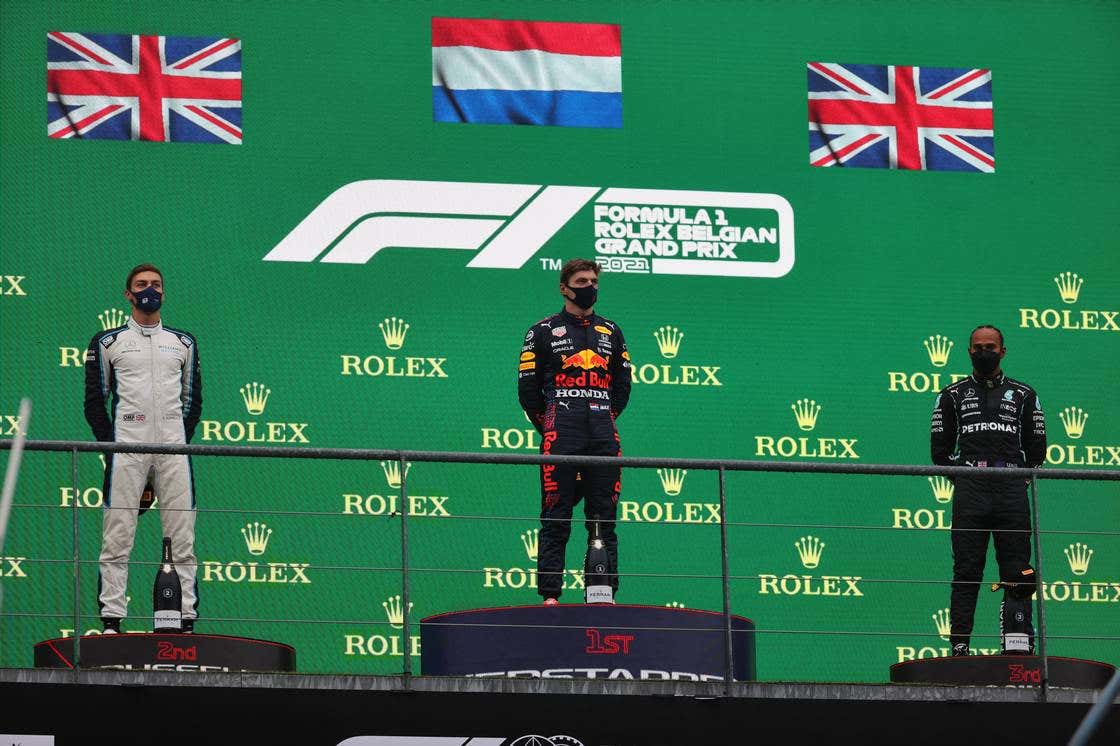 In the United States, it was a showdown for both Honda-powered Red Bulls, which netted Verstappen and Perez a 1-3, with Hamilton doing damage control with a second-place finish. In Mexico it looked like the deal was done, with Honda outpacing Mercedes to put Verstappen 19 points ahead. Then a grid penalty and disqualification from qualifying just couldn’t stop Lewis Hamilton in Brazil.

By Qatar, it seemed more like the Red Bull couldn’t compete, and finally, we arrived in Jeddah.

Both teams have a tendency to play up the other’s advantage, but Verstappen really would have been set for pole around the Jeddah Corniche Circuit, right up until the moment he hit the wall on his blistering flying lap. So Hamilton got the top spot at the start. Well, one of them. 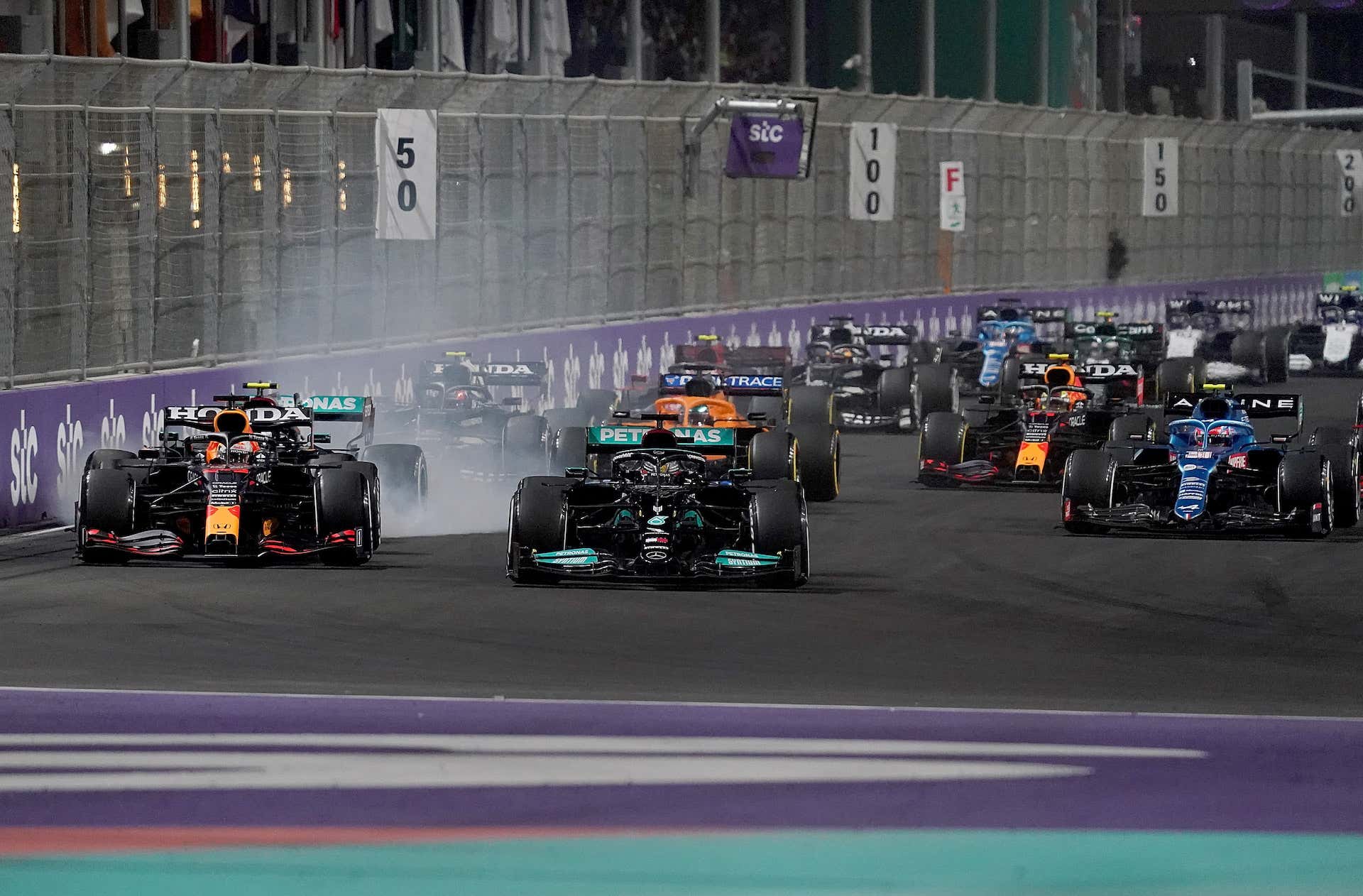 First Hamilton was on pole, then Verstappen was on pole for a second start after a red flag. Then Esteban Ocon was on pole for the third start. After on-track bickering for position more reminiscent of a British Touring Cars race than F1, especially around a more-than-150-mph average street circuit, Hamilton passed Verstappen for the lead on track and the Red Bull received two penalties for questionable driving—which ultimately had no effect.

Verstappen’s tires faded in the final stages of the race, letting Hamilton take the point for the fastest lap. And so here we are, 369.5 points each, going into the final race. Verstappen has more wins, so if they both fail to score points then he’ll win on number of victories alone. But whatever happens, it will be decided around the heavily reprofiled Yas Marina, changed to make for good racing. Let’s hope it does.

Got a story tip? Send it in on [email protected]