Now hosted in Saudi Arabia, the 43rd edition of what used to be known as the Paris-Dakar Rally featured Honda taking the overall win with a 1-2 on two wheels thanks to Argentinian ace Kevin Benavides and America’s Ricky Brabec, followed to the podium by British KTM rider Sam Sunderland. In the top car class, aided by his new co-pilot Édouard Boulanger, Stéphane Peterhansel scored his eighth triumph on four wheels, marking his 14th title with six motorbike wins as well. What’s more, 2021’s victory comes 30 years after “Mr. Dakar’s” first win with Yamaha in 1991.

The Frenchman once again drove a fully custom Mini John Cooper Works Buggy built by the experts at X-Raid, a car that also took third place on the podium; Carlos Sainz and Nasser Al-Attiyah’s Toyota GR Hilux placed second. As amazing as these trucks are, it’s worth remembering that up until around 1985, amateurs had a fair chance of winning this challenge with converted road cars built in a shed, or a basic 4×4 lifted for dune duty. V8-powered Range Rovers took home two of the three first Dakar trophies. However, when looking at our favorites, it would be rude not to mention the Mitsubishi Pajero, an off-roader that was part of the Dakar story from 1983 until 2009, with its first win in 1985 and 11 more until 2007’s with—who else—Stéphane Peterhansel behind the wheel. 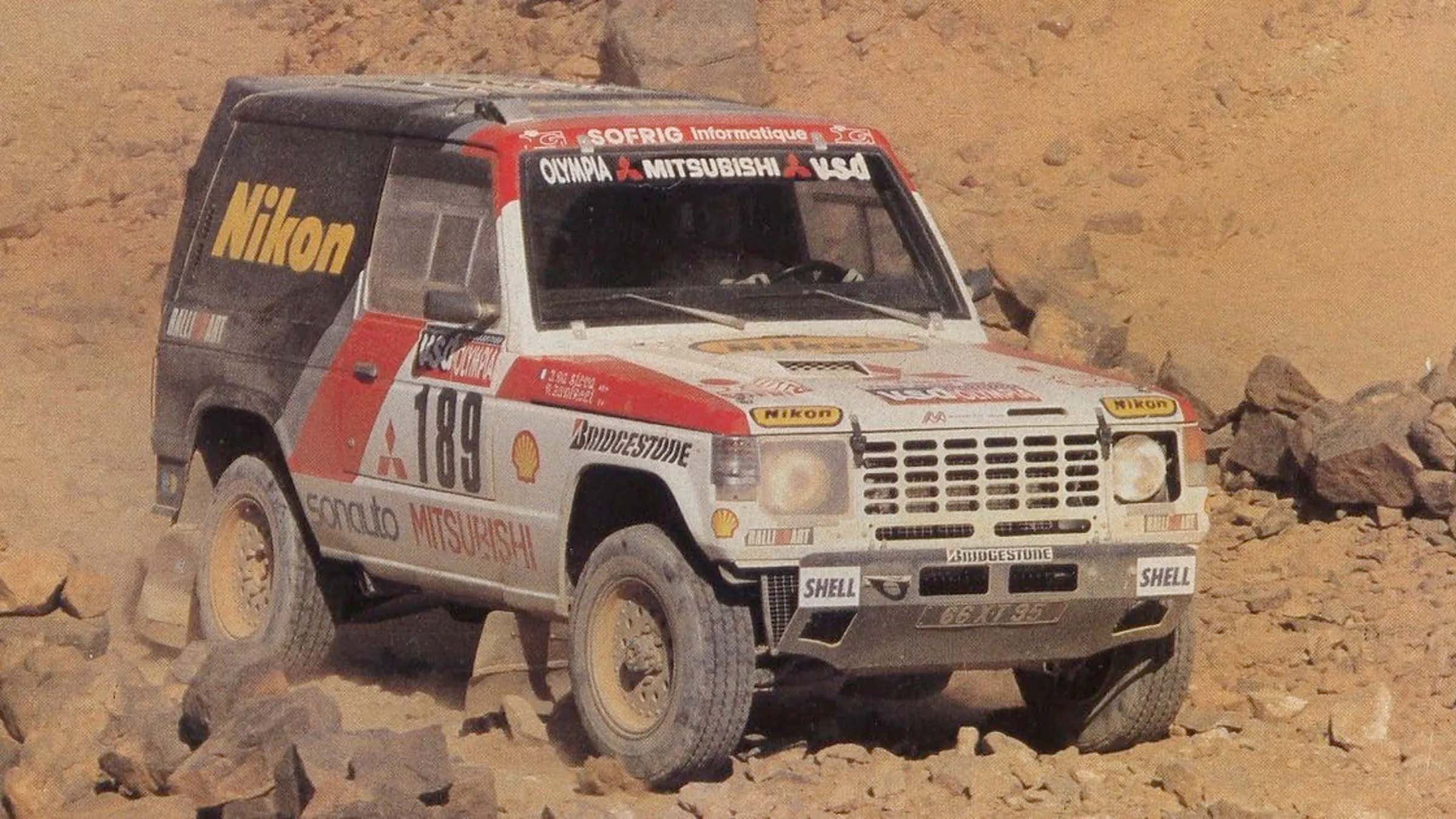 With Volkswagen, Mini, Peugeot and Toyota battling it out with their extreme diesel buggies in the last decade or so, it’s time we looked back at five unlikely Dakar heroes, sometimes powered by the most humble of engines.

The story of how the 70, or perhaps 75-horsepower Iltis could win the second Paris-Dakar Rally is a fun one. Basically, Volkswagen had this truck built by Audi using its experimental four-wheel-drive system that later evolved into Quattro, and because this was a niche vehicle that was expensive to produce, VW decided to campaign four of these at the 1980 event, hoping to attract a contract from the French military.

The second Dakar saw fellow vehicle manufacturers Yamaha, Lada and BMW taking part, as well as the introduction of a truck class. As a result, the number of competitors went up from the previous 170 to 216. Only 81 teams completed the event. Forty-nine cars of 116, 25 bikes of 90, and seven trucks out of the 10. The mighty Iltis turned out to be unstoppable. While according to Patrick Zaniroli, their vehicles were closer to stock, the Audi-developed 4x4s still headed towards Senegal with bigger carburetors, hotter camshafts, and of course the selectable four-wheel drive offering an extra low-gear for those tricky dune situations.

Team Volkswagen took first place with Freddy Kottulinsky and Gerd Löffelmann, second with Zaniroli and Philippe Colesse, and fourth with Jean Ragnotti
and Georges Vaills, because the podium wouldn’t have been the same without the French Marreau brothers’ equally four-wheel drive Renault 4 Sinpar. 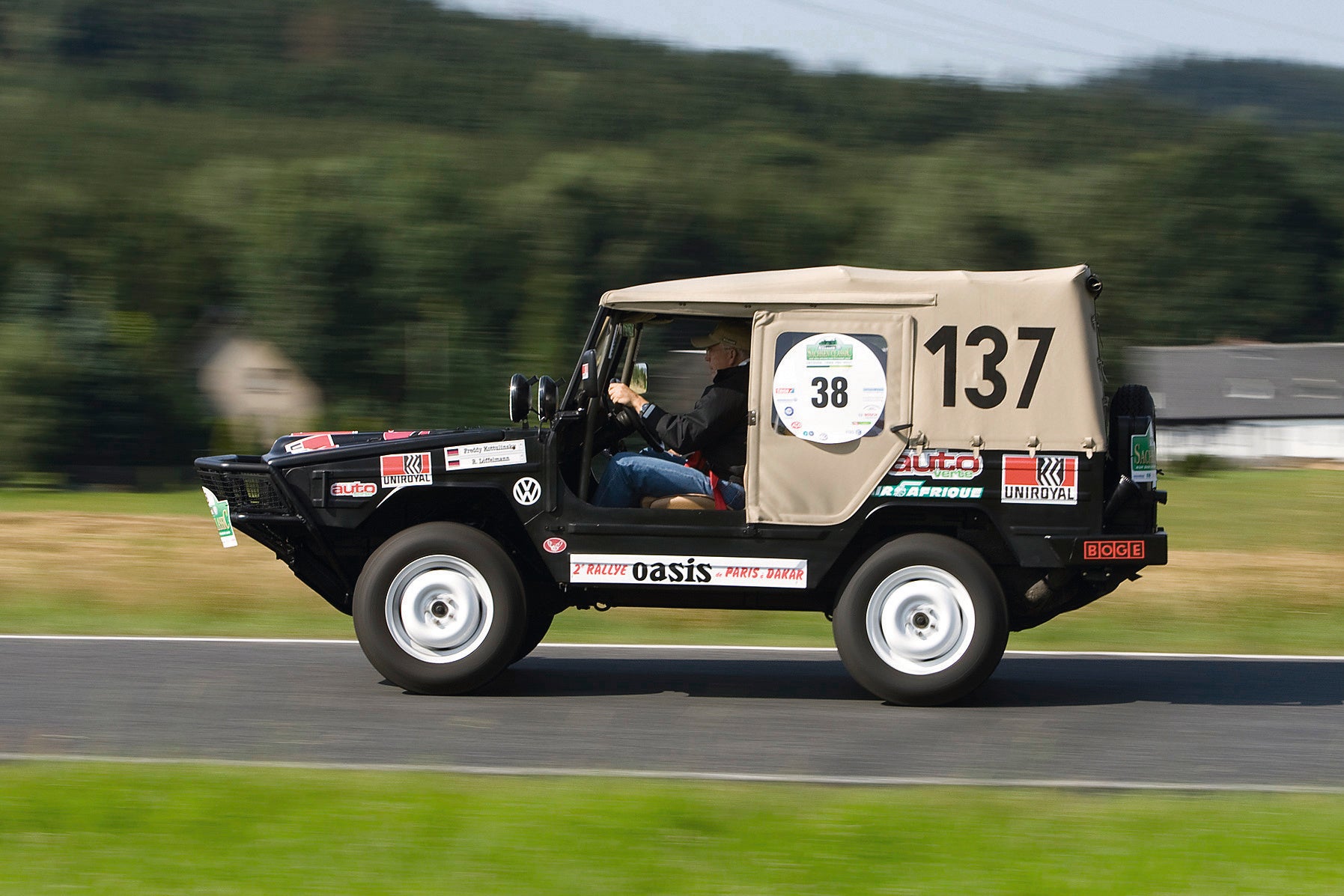 As proven time and time again, lifted Porsche 911s can do remarkably well in a “Safari” environment. Back in 1984, the Stuttgart crew wasn’t quite ready with its Group B technology, leading to a fleet of fairly stock naturally-aspirated, 3.2-liter Carrera 4x4s being sent to race at the Dakar. This turned out to be a better idea than the still 911-powered, yet 959-bodied mules of the 1985 race, since instead of failing, a 1984 car won with René Metge, followed by Jacky Ickx in sixth place.

With a whopping 427 entries, the Dakar blasted through Ivory Coast, Guinea, Sierra Leone and Mauritania for the first time. The fact that a raised 911 with a basic 4×4 system could beat both the Range Rover of Patrick Zaniroli and Andrew Cowan’s Mitsubishi Pajero Evolution to the top is a testament to both triple Dakar champion Metge’s driving skill, and Porsche’s build quality. 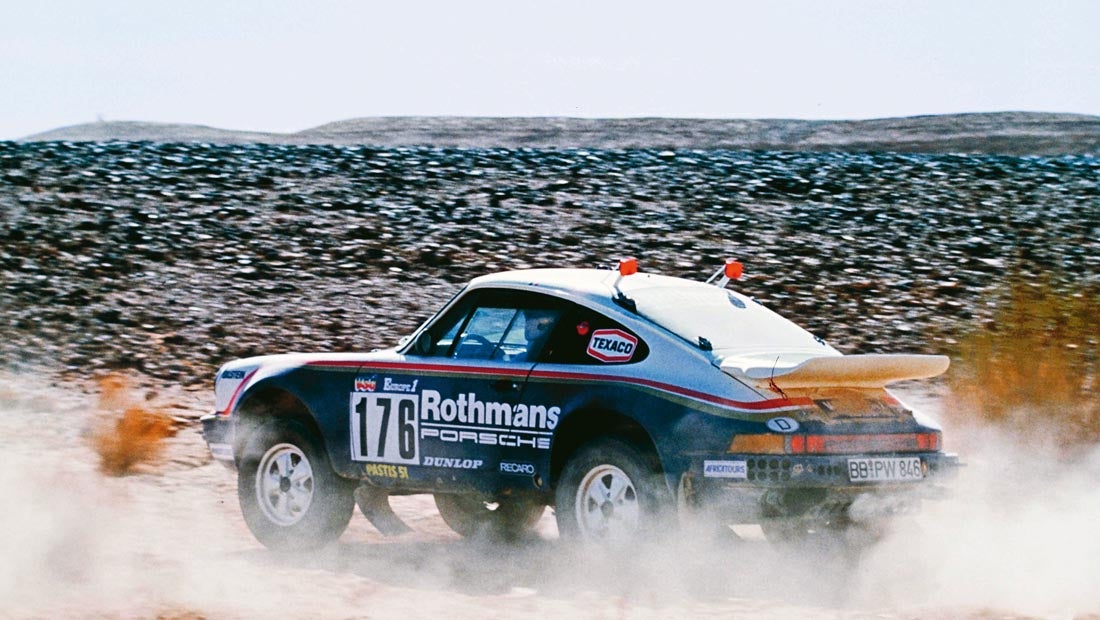 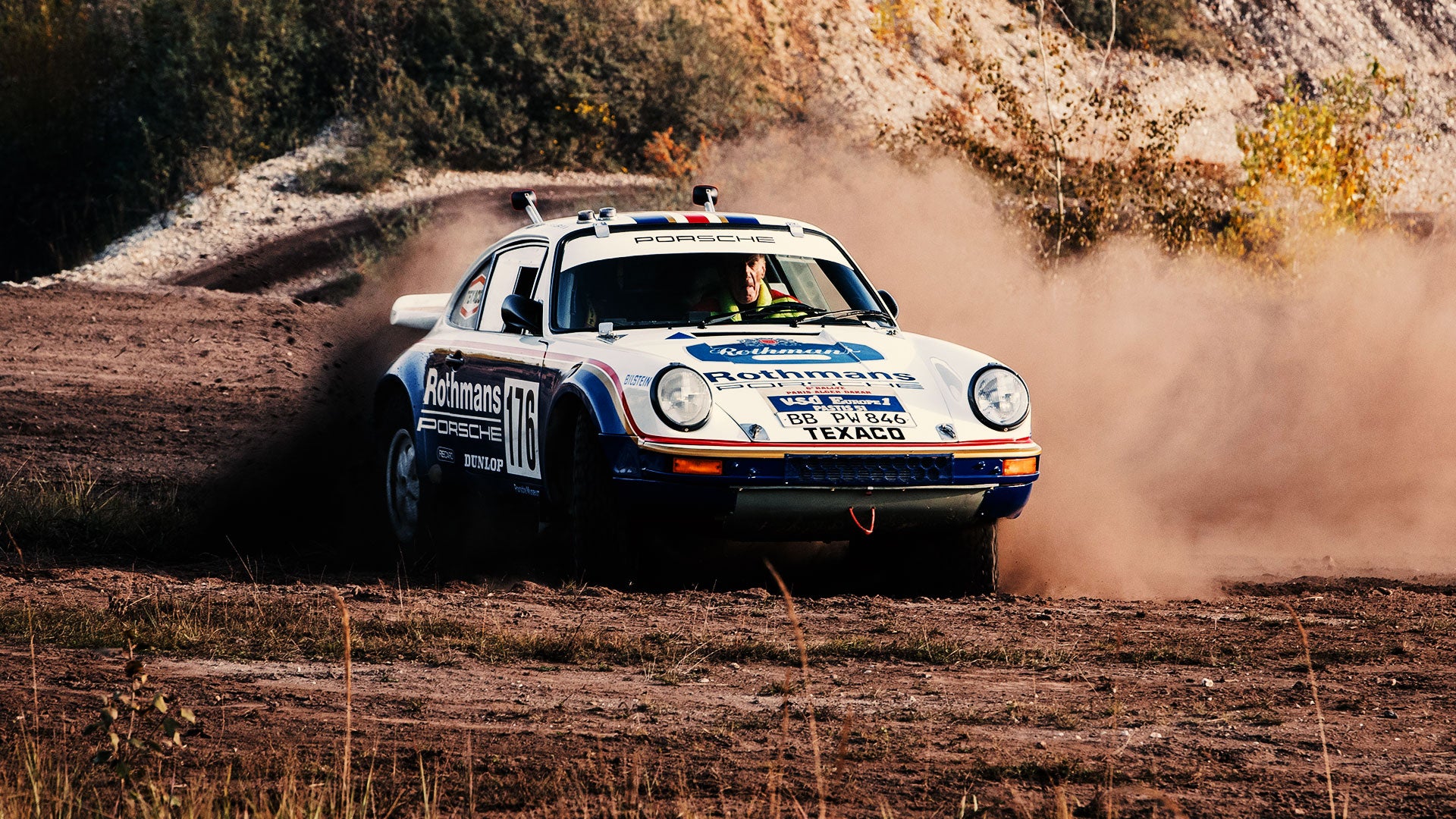 The Buggy Schlesser is a custom Baja-spec truck that won twice overall despite being rear-drive only, with several more class wins and other off-road trophies grabbed along the way. It’s the creation of now 72-year-old French racing ace Jean-Louis Schlesser, who had a short and rather unfortunate stint in Formula 1, and a much longer and successful one in touring car and endurance racing. Still, Schlesser probably had his best ride in the car of his own, which was first powered by Ford and made to remind you of a Focus, and then became a “Renault-based” Mégane-looking evolution to win the Dakar, twice.

Using different powertrains, the Buggy Schlesser kept racing competitively until 2014, which is not bad for an early-’90s design lacking four-wheel drive. 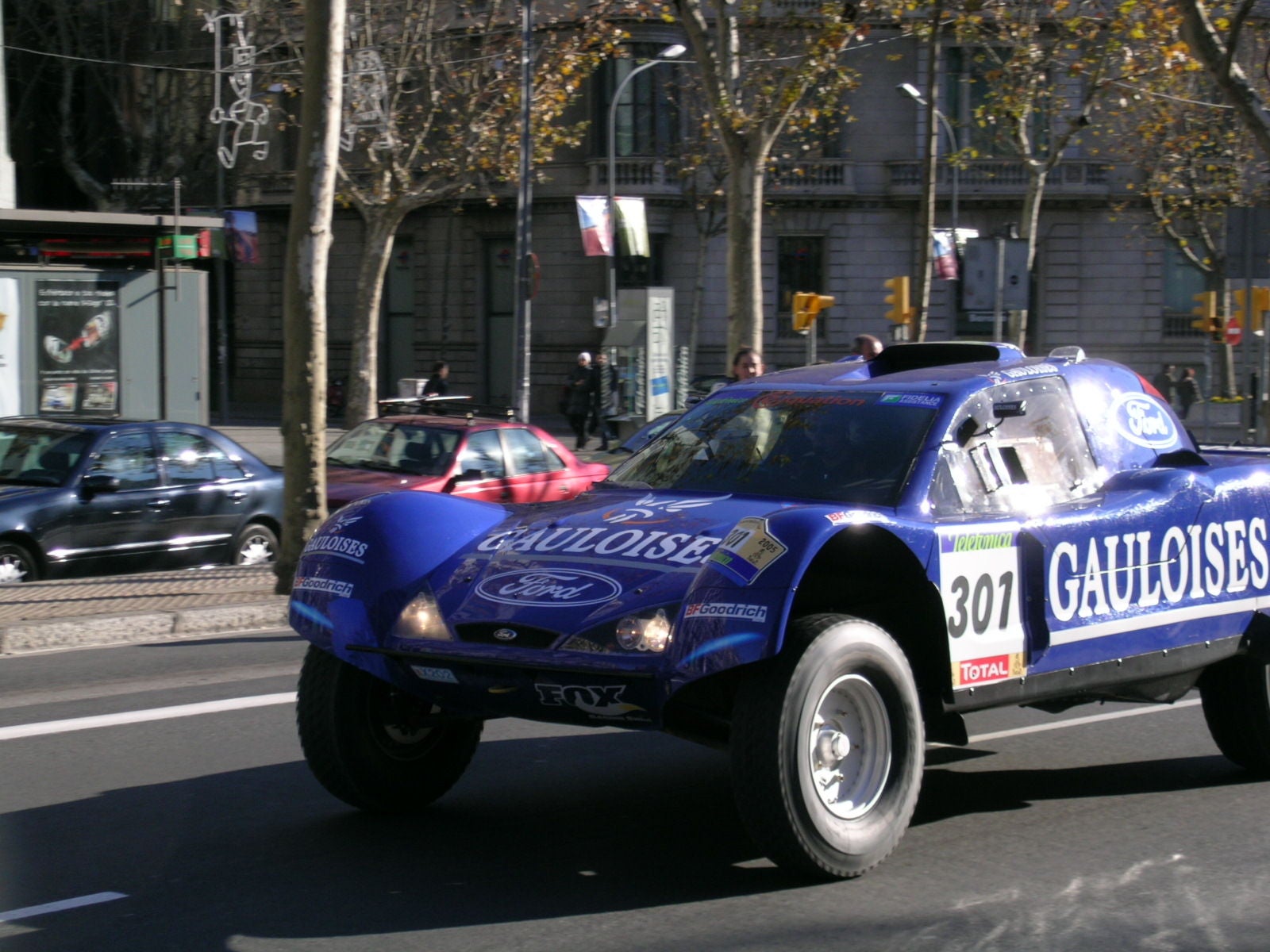 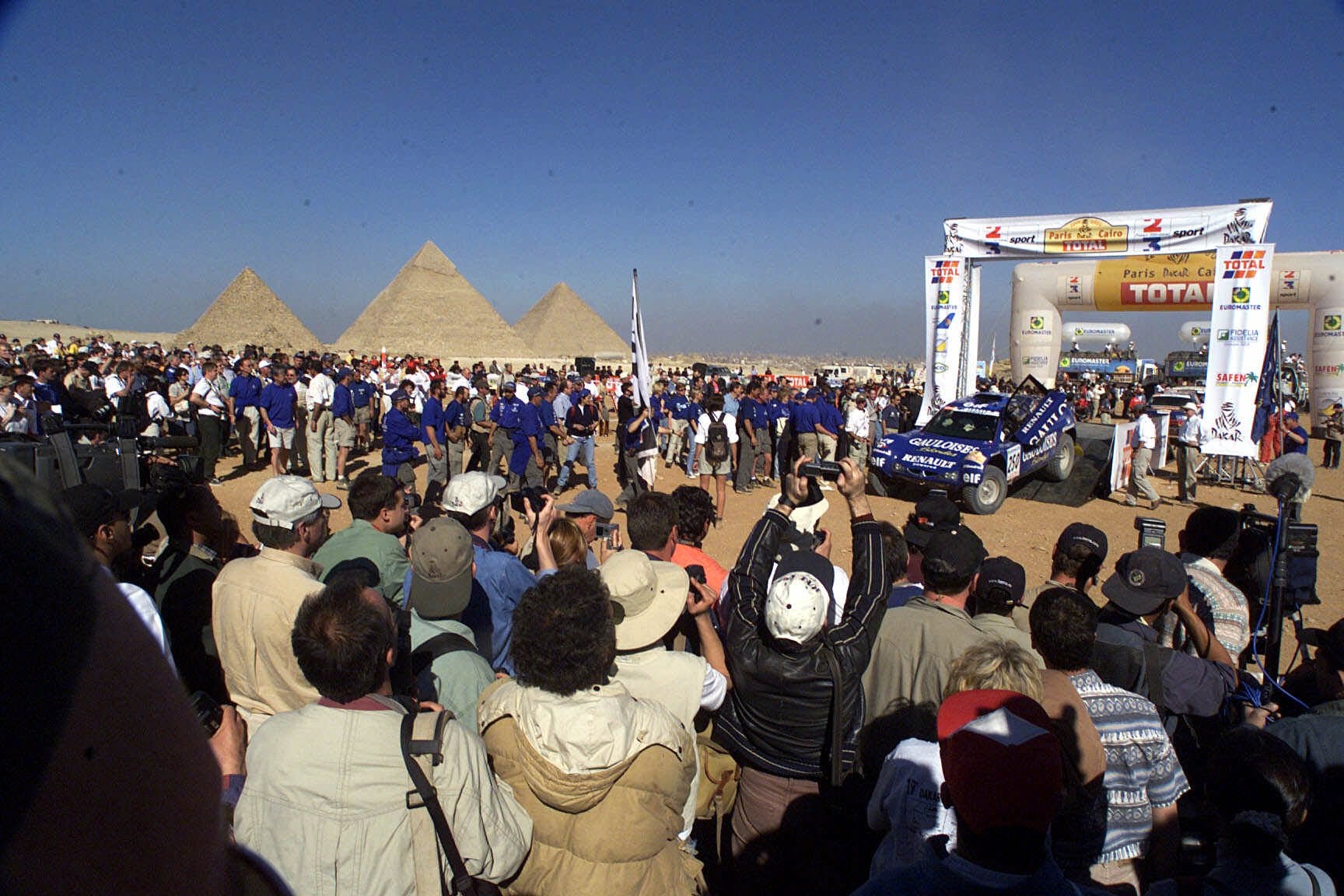 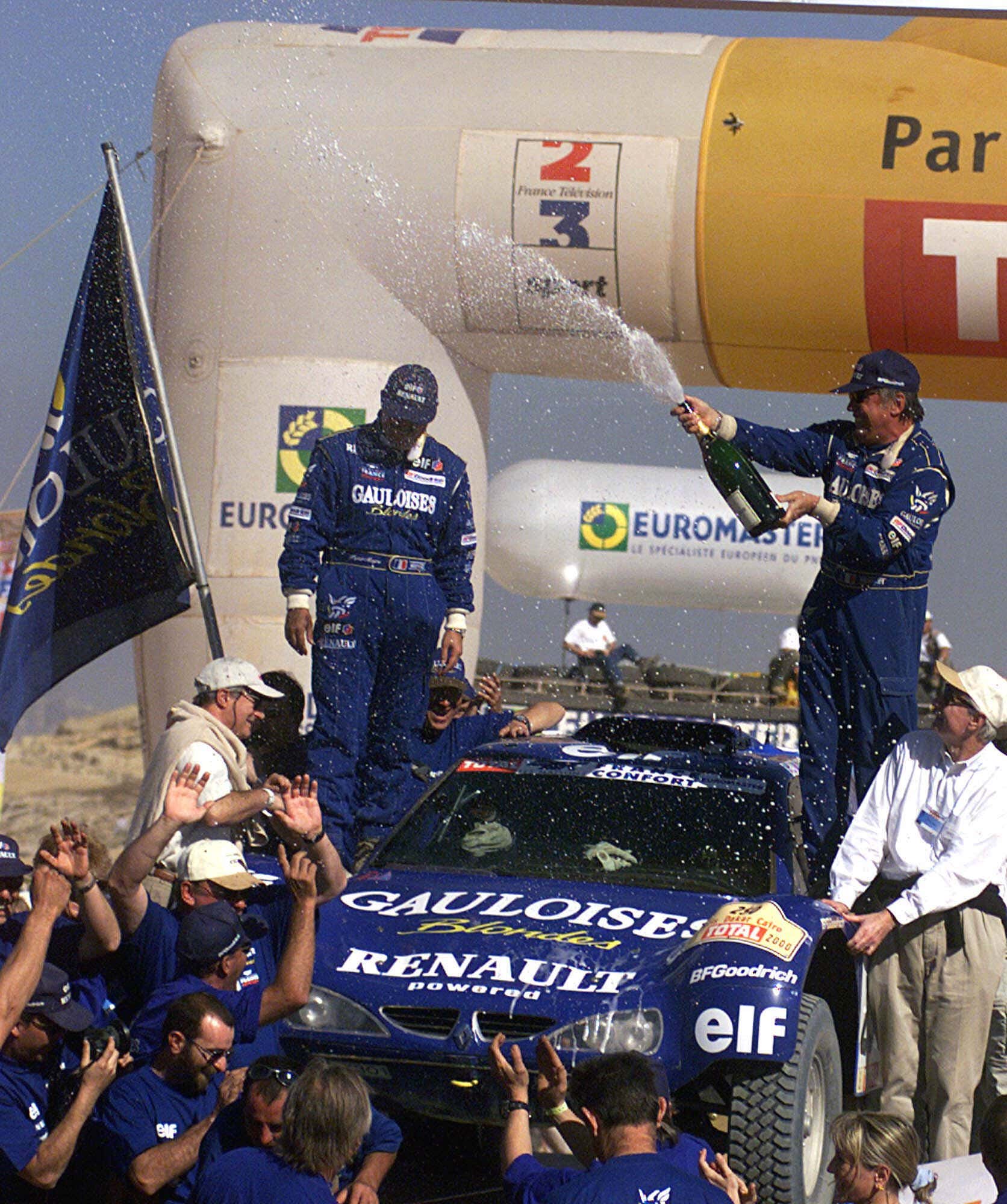 Before making its huge comeback in 2016, first with the 2008 DKR and then the 3008 DKR rally raid trucks, Peugeot was dominant at the Dakar throughout the late ’90s, mostly thanks to Ari Vatanen. The Finn was even kind enough to let Juha Kankkunen win for Peugeot in 1988, once his 405 T16 was stolen overnight for ransom at Bamako. Vatanen went on to score one of the four victories of the later Citroën ZX Rallye Raids, the cars PSA campaigned once the Peugeot 405 T16s were retired.

However, it’s the Group B 205 T16 that started it all with Peugeot’s extreme rally lineup. To become capable of winning the Dakar twice, the mid-engine 205’s tubular frame had to be strengthened and extended by 12 inches in front of the power unit, which was enlarged to 1,905cc instead of the WRC-spec 1,775cc. However, the turbo’s fury got dialed back to provide 360 horsepower in a car that was already at 3,000 pounds with a full tank of gas, and could hit the sand at over 3,500 pounds once two men and all the extra parts got strapped in.

Everything Peugeot could learn from the 205s went into the equally successful 405 T16 Grand Raids, which then evolved into Citroëns by 1991. 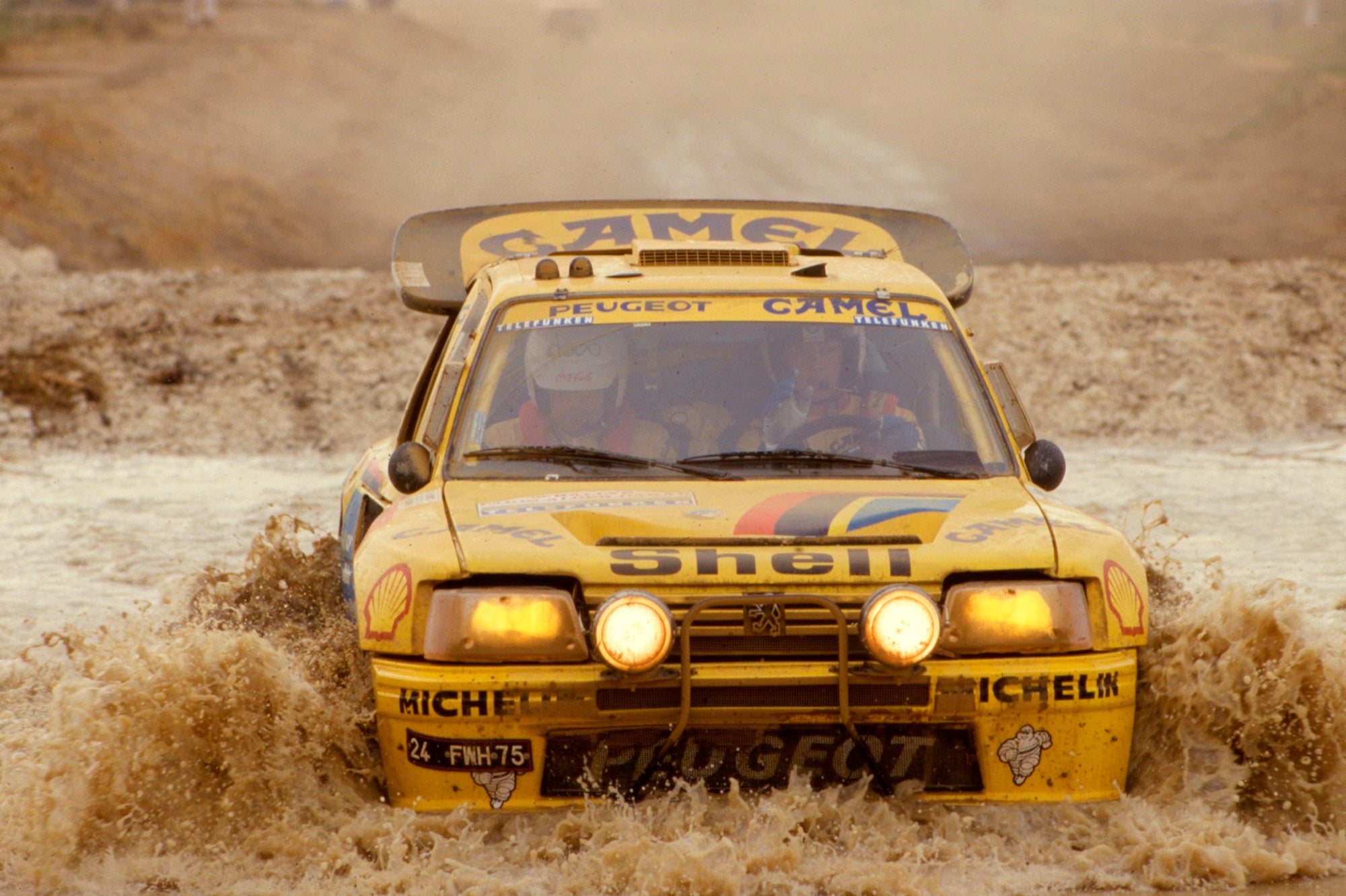 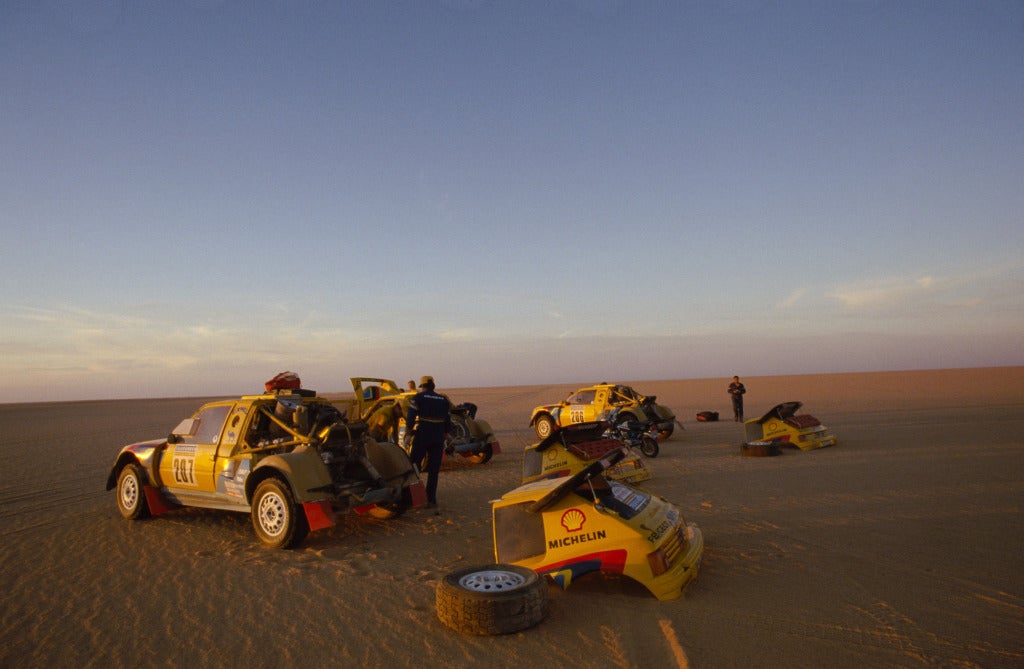 For the fourth Paris-Dakar, 382 competitors rolled up in front of Place de la Concorde. Among them were Claude and Bernard Marreau, the brothers also known as “the foxes of the desert.” It was the year before the Marreau team entered their Renault 20 Turbo prototype, built for the factory using the know-how gained from driving the Renault 4 Sinpar against those Volkswagens in 1980.

Renault supplied them with a body in white, which was welded up and strengthened before getting the live rear axle of a Renault Traffic van, as well as four-wheel drive and a fitting gearbox. The 1.6-liter engine came from a Renault 18 Turbo, also known as the Fuego in coupé form. After two stage wins, the car failed to finish in 1981, only to make a glorious comeback in 1982, grabbing the overall victory in front of Briavoine (Lada Niva), Jaussaud (Mercedes G), Lartique (Range Rover), Ickx (Mercedes G), and Zaniroli (Range Rover).

That’s right. A Renault 20 with a roof-mounted exhaust built by an amateur team of French desert foxes beat all those proper off-roaders, making Renault and main sponsors Elf and Uniroyal very happy indeed. Today, only three of these Marreau prototypes remain, with the 1982 winner being part of the Renault Museum’s impressive collection. 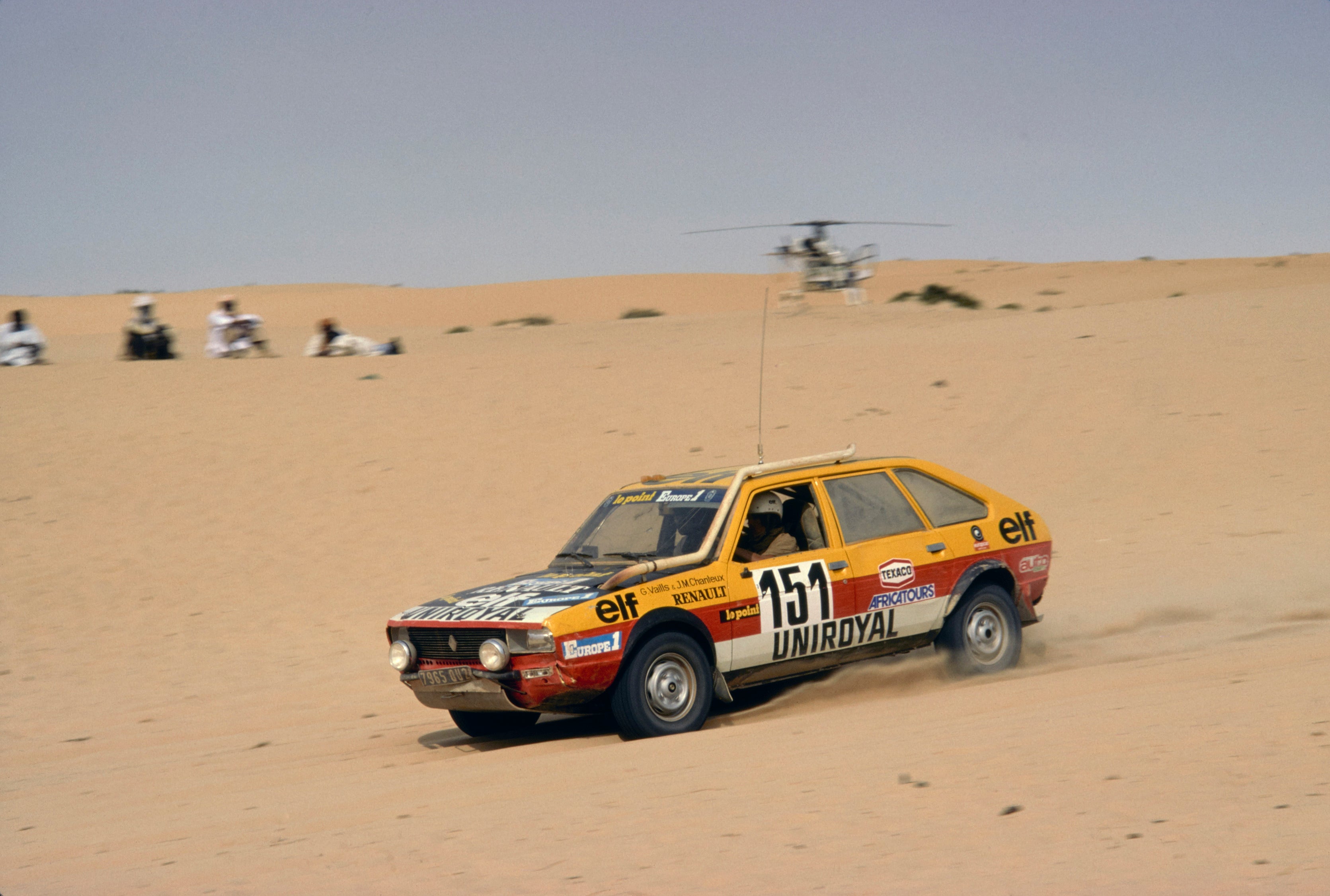 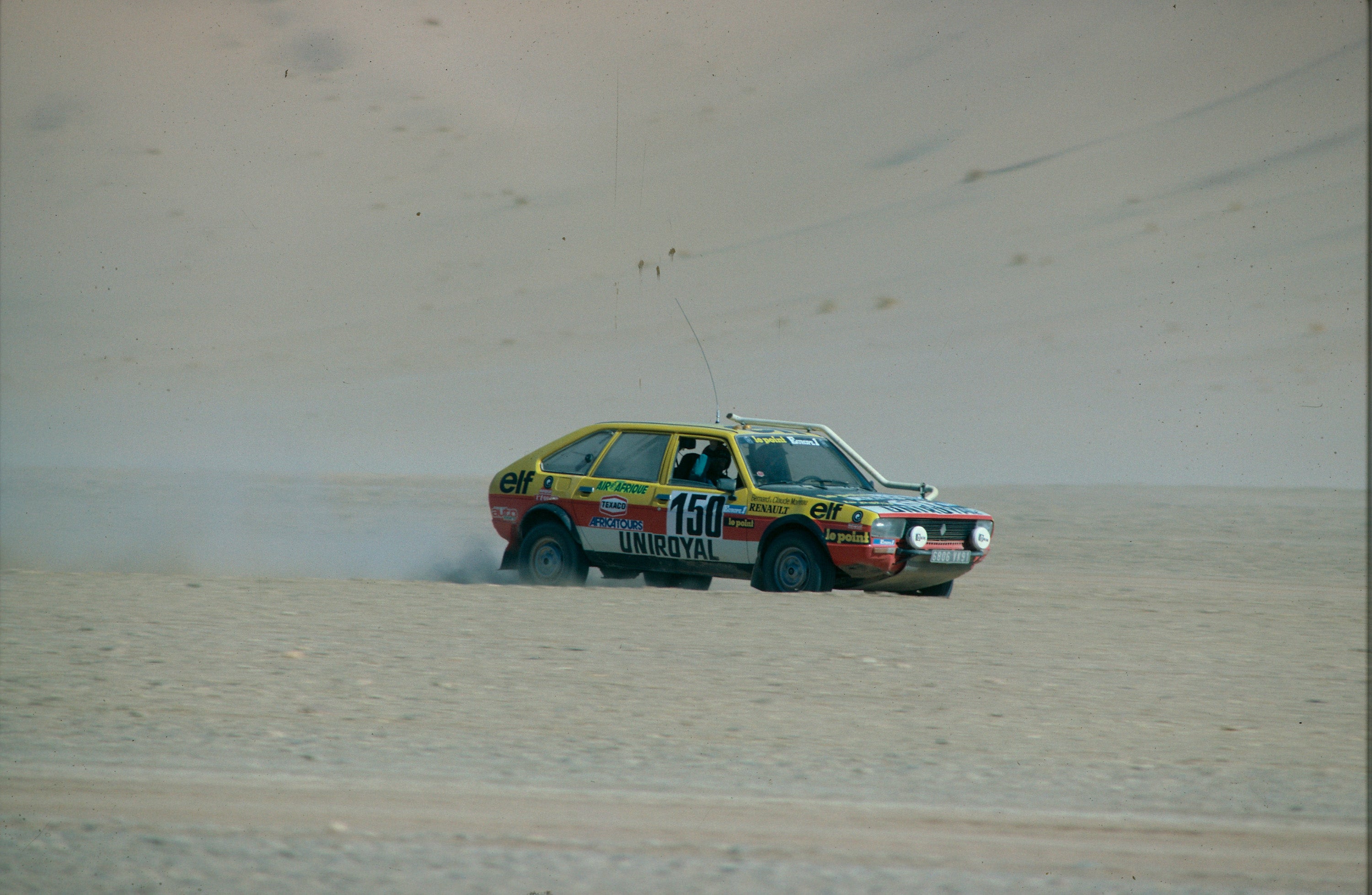 Something we left out? Please share your own favorites with us below!