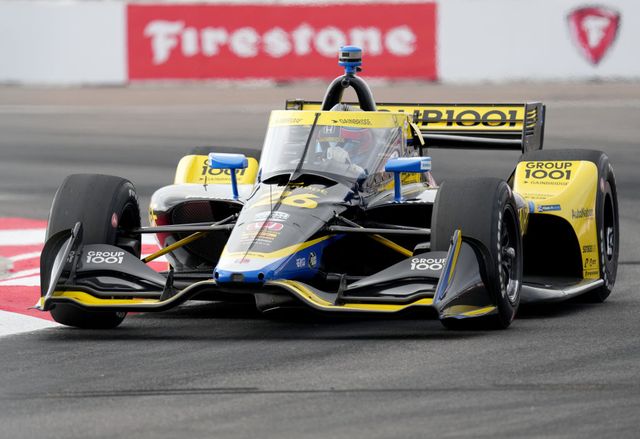 Six years into the Haas F1 Formula 1 team project, the American team still doesn’t look all that American to a casual fan.

And while Italian-born team principal Guenther Steiner has American citizenship, and team owner Gene Haas is American, the team has yet to field an American driver on the Formula 1 grid. The team has featured an international cast of drivers that has included Romain Grosjean, Esteban Gutierrez, Kevin Magnussen, Mick Schumacher and Nikita Mazepin.

Pietro Fittipaldi, a Miami-born racer who races under the Brazilian flag, did race twice for Haas last season in place of injured Grosjean.

Getting that full-time driver with the American flag on his or her helmet out on the grid in a Haas is not as simple as it sounds, Steiner said on Friday in Baku, Azerbaijan, site of Sunday’s F1 Azerbaijan Grand Prix.

The Super License is the sport’s “passport” to Formula 1. It’s based primarily on a points system. Drivers earn Super License points through season finishes in other series. Score 40 points in a three-year period (the number was lowered to 30 this year due to the pandemic), and you clear the first hurdle. An IndyCar championship, for example is worth 40 points, while second-place in the IndyCar Series is worth 30 points, third is worth 20 points and points are awarded all the way down to 10th place in the championship.

A Formula 2 championship is worth 40 points, while Formula 3 title is worth 30. Dozens of series worldwide are part of the formula, including the W Series for women (15 points to the winner) and even major karting series. The list of points accumulated is not something published by the FIA or F1. An audit is conducted once a driver applies for the Super License.

Among Americans who qualify for the Super License, 2019 IndyCar champion Josef Newgarden heads the field. Colton Herta (pictured above), whose name often comes up in the discussion of possible American F1 drivers, earned 20 points for finishing third in the IndyCar championship in 2020 and appears well on his way to that Super License. Herta’s dad, Bryan, tested an F1 car for Minardi in 2002.

“I never spoke with Colton, but we all know has no Super License,” Steiner said.

Logan Sargeant, a 20-year-old driver from Florida, finished third in Formula 3 (20 points) last year. Sargeant did not have the sponsorship to move up to F2 this season, and he recently signed a deal to return to F3 for 2021.

Alexander Rossi, currently racing for Andretti Autosport in the NTT IndyCar Series, is the last American to race in F1. That was in 2015.

“The American drivers, they all get a good job in America,” Steiner said. “For sure, we are always looking, and I speak with (F1 CEO) Stefano (Domenicali) about it—what could be done and what couldn’t be done, and we try to make a plan for the future.”

Steiner and Haas, before going with rookies Schumacher and Mazepin this year, have committed to F1 veterans under the premise that results mattered. The results, however, have not been there, as Haas is at the bottom of the F1 standings for the second consecutive year and has yet to score so much as a single podium in the history of the team.

Could an American driver do any worse? Or, more importantly, any better?

“It will come,” Steiner said. ” We just need to be patient at some stage. There are a few guys in Formula 3 which look promising, and let’s see what can be done.”