Join us as we delve into the latest technical developments on display at the Austrian GP, courtesy of Motorsport Images.

Click on the arrows on the images to scroll through them… 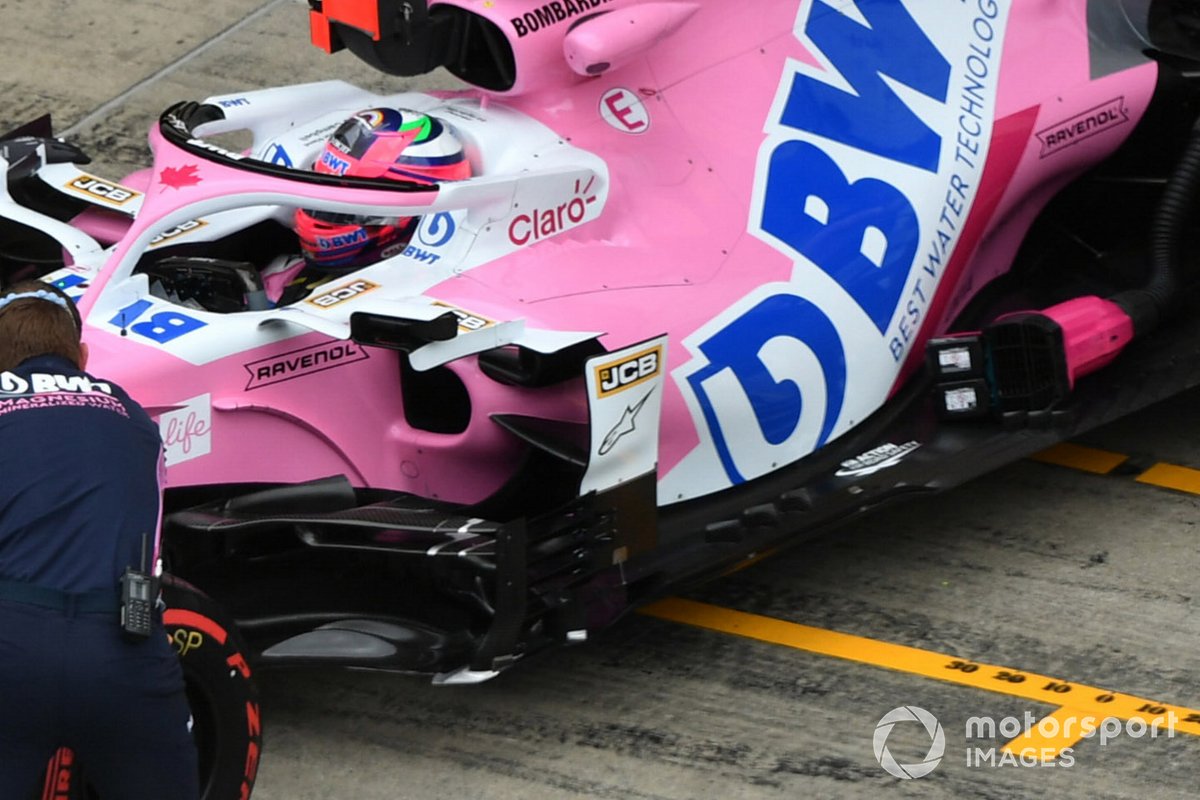 Racing Point has fitted the new bodywork it took to Australia but didn’t get the opportunity to use. The deflector array upgrade is almost identical to the one that Mercedes introduced at the Japanese GP in 2019. 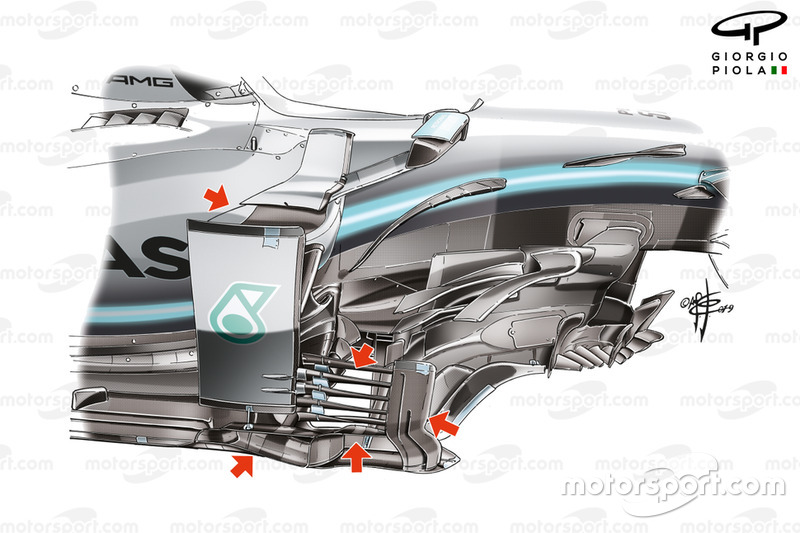 For comparison, here’s the illustration that Giorgio Piola created when Mercedes first introduced the update in Japan. 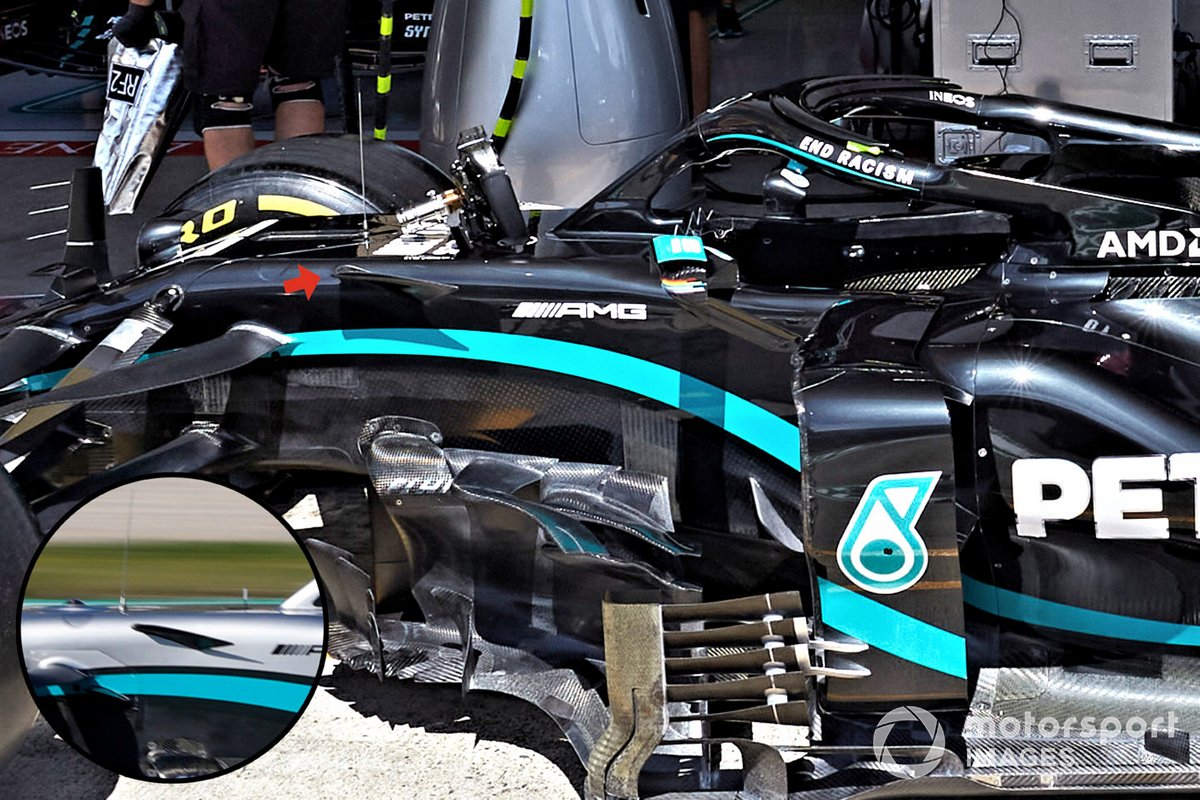 Mercedes has redesigned the fin on the chassis, which is now larger, placed higher and is more twisted – all which is done to improve flow into and around the sidepods behind. 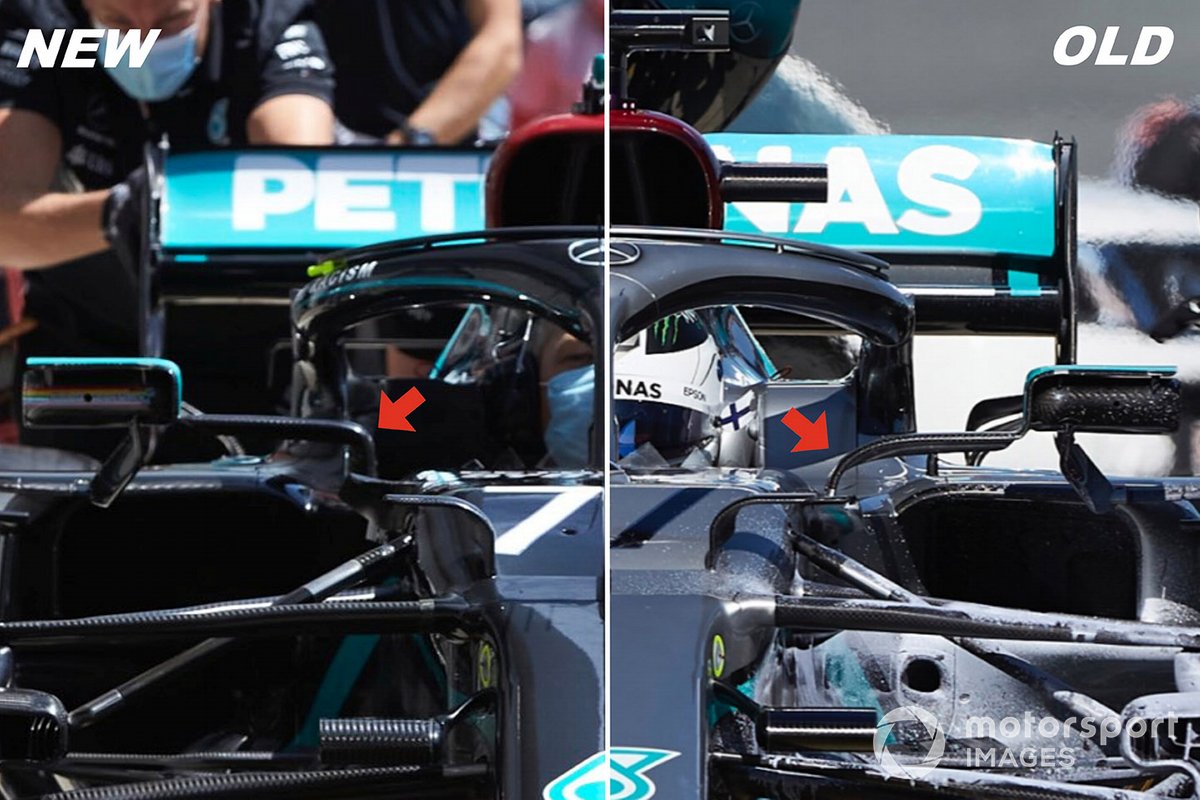 The mirror stalk connected to the cockpit has been altered on the W11 as part of the upgrade package, with the stalk now squared off, rather than being an arch shape. 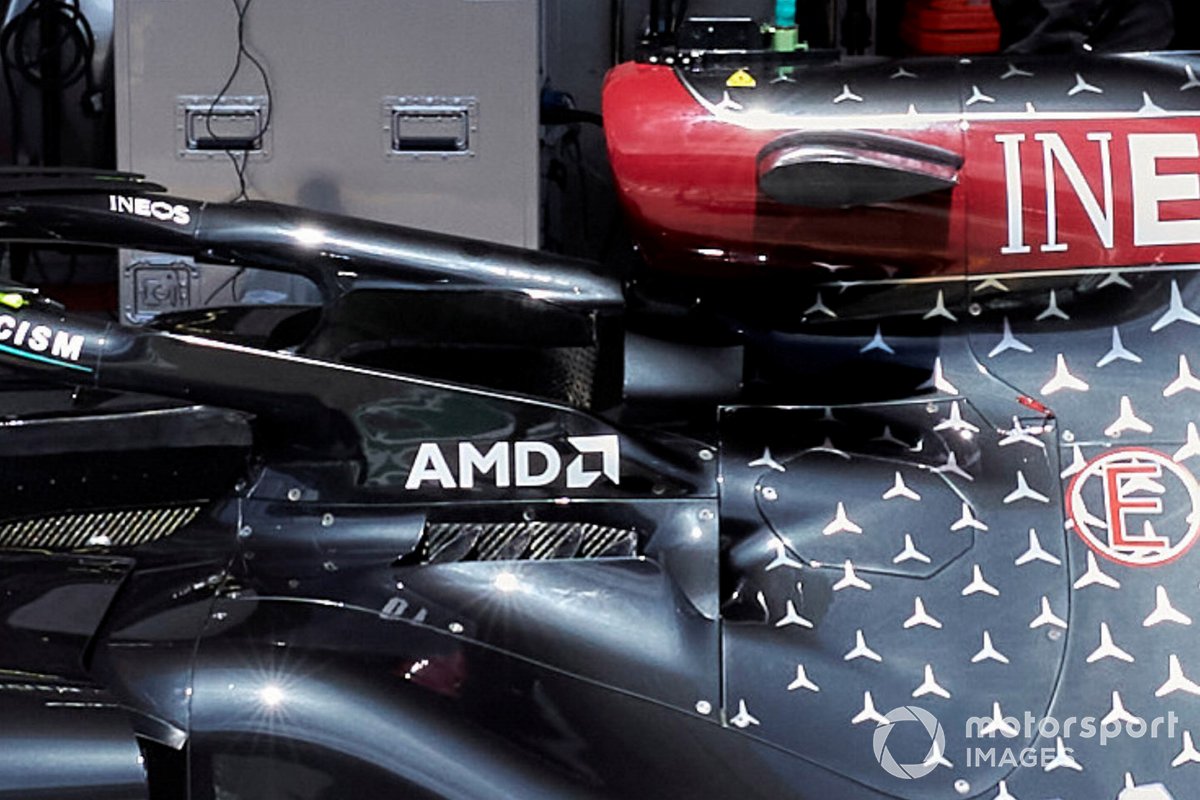 To help deal with the rarified air at altitude, Mercedes has a large louvred panel beside the cockpit to help reject heat and changed the shape of the panel behind to open up another outlet where the panels transition into one another. Depending on the temperatures, which are currently cooler than usual for the time of the year, it may not run this option. 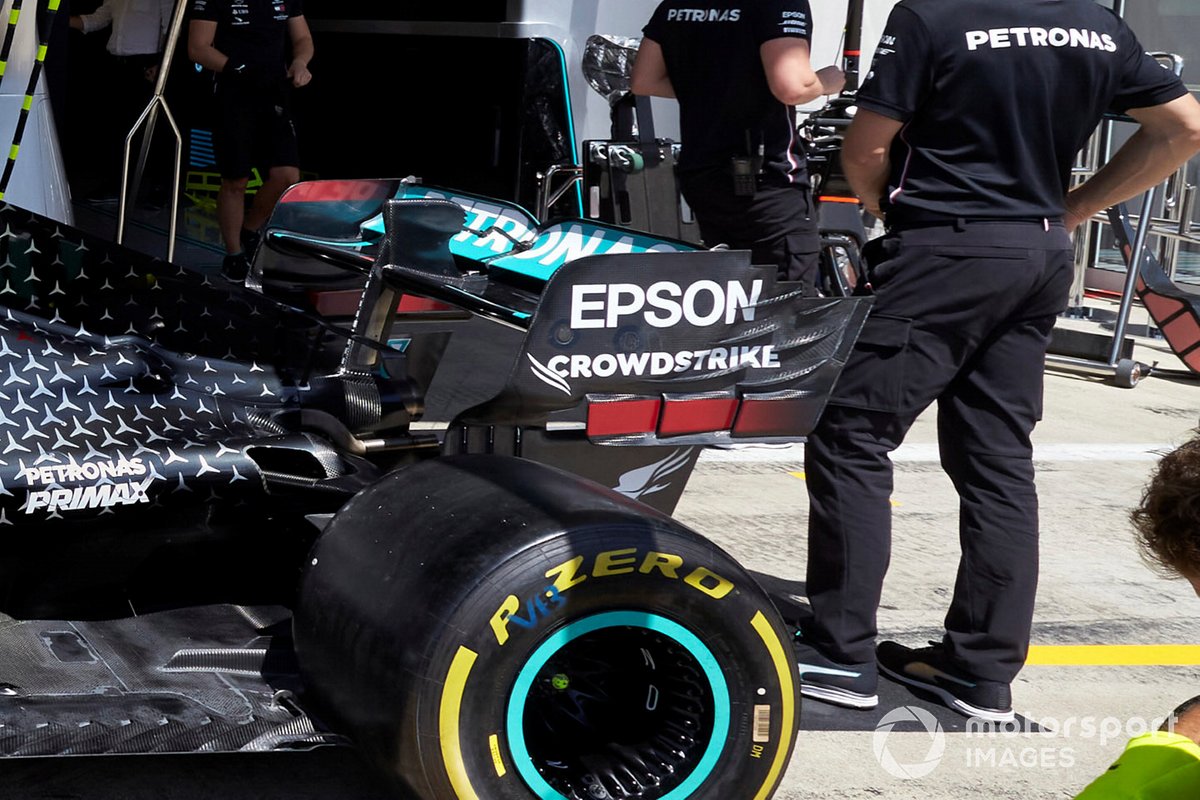 Mercedes’ rear wing is not only mounted on the single pillar that the team trialled in the latter phases of the pre-season test, it also features new endplates, with the overhanging vanes made larger. 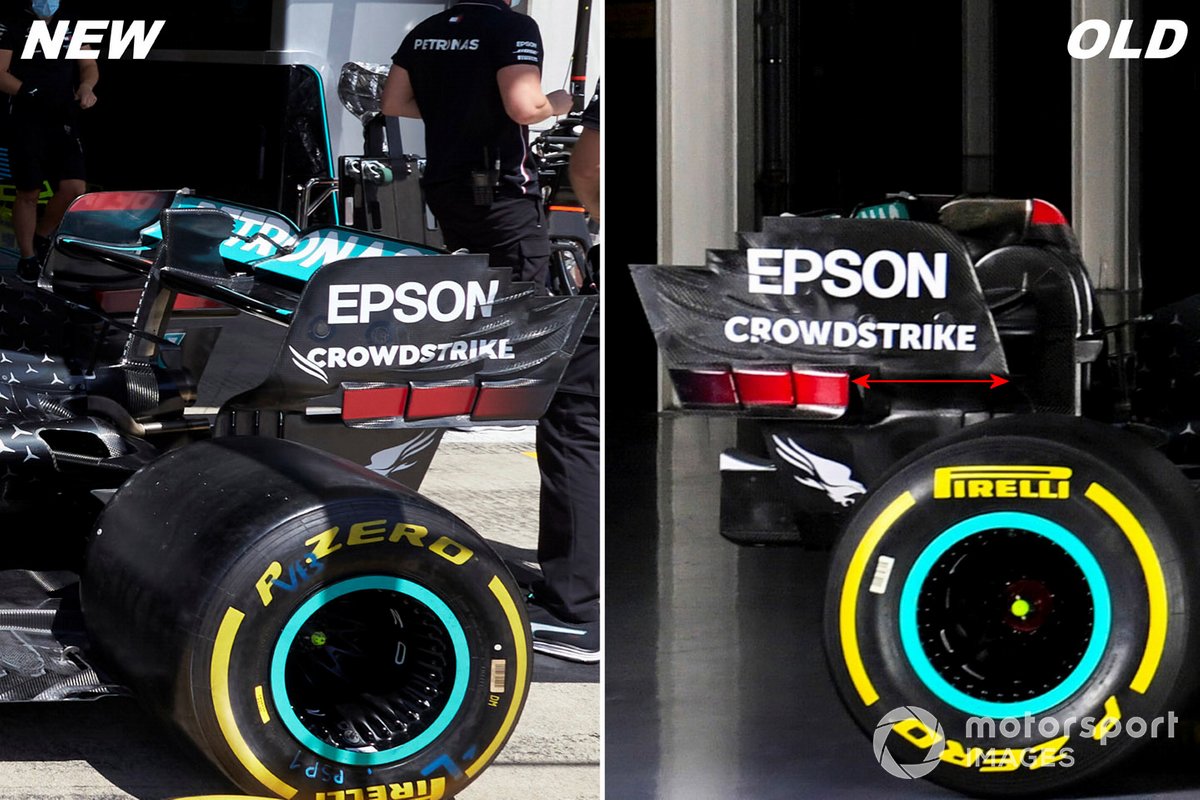 Here’s a comparison of the new (left) and old specification wings so that we can see how radical that change is. 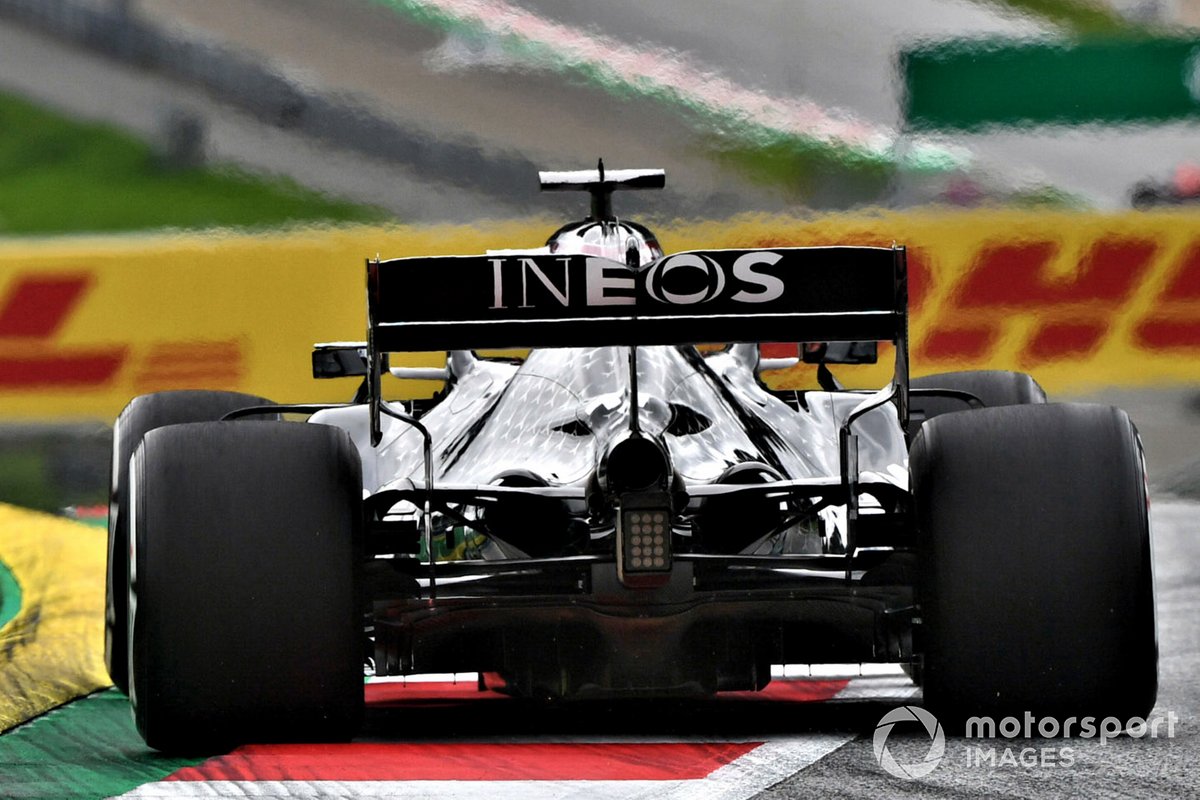 At the rear of the car the outer channels of the diffuser have been massaged to alter performance. Look carefully and you’ll see it is evaluating flow under the car with pitot tubes hanging beneath in a row. 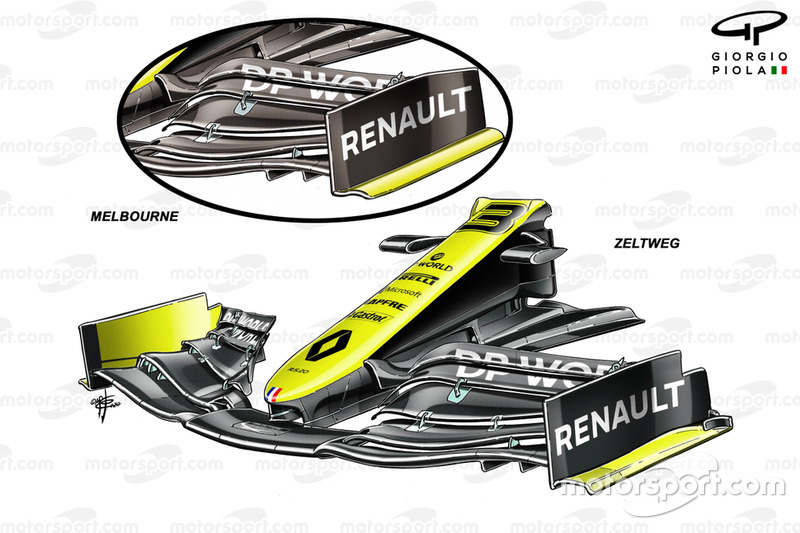 Piola has illustrated the changes that Renault made to the front wing, most of which are aimed at the outboard section and altering how the airflow is moved across and around the outside of the front wheel in order to affect the wake it creates. 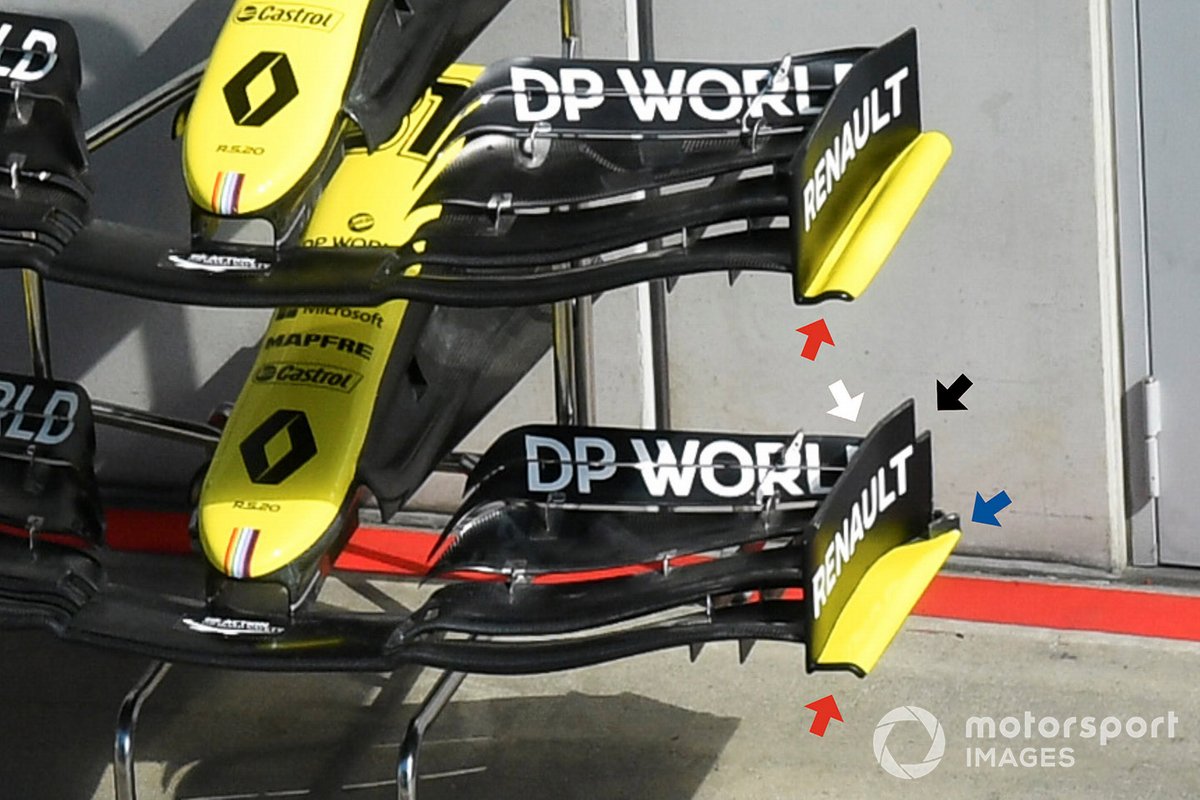 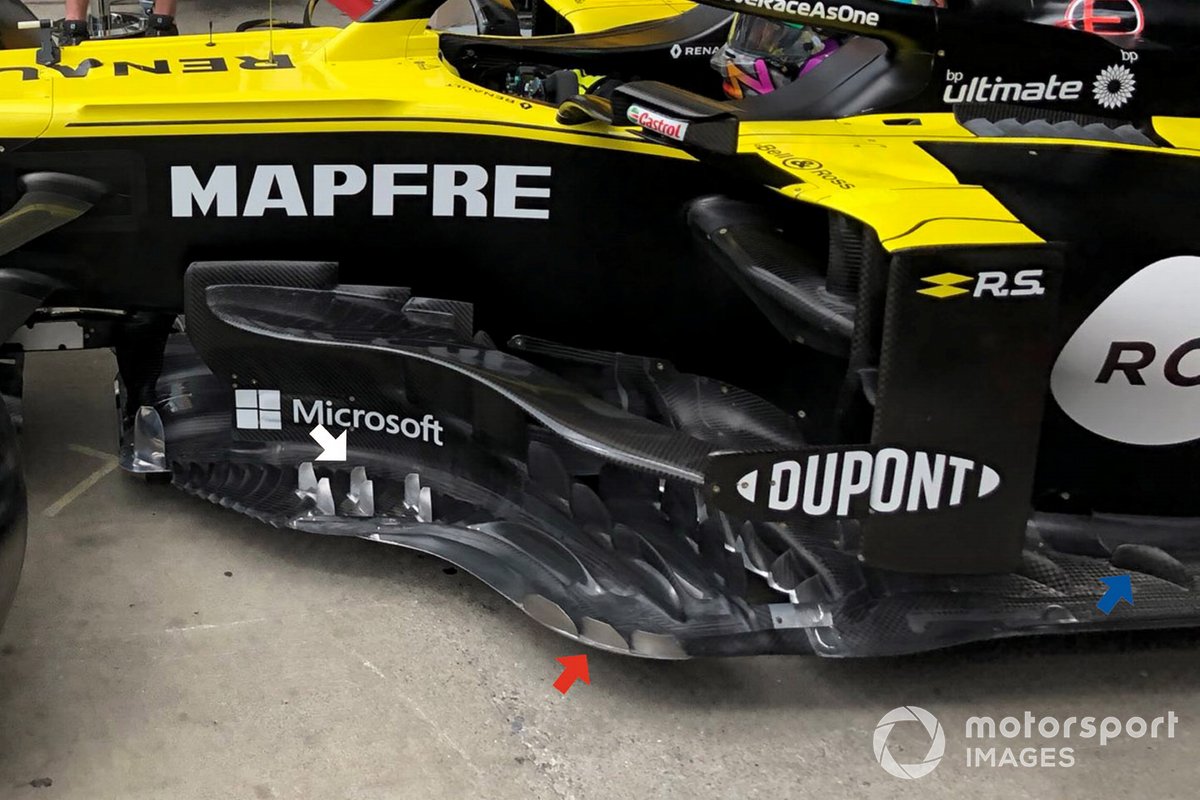 As part of its collection of upgrades, Renault has a new set of bargeboards in Austria, complete with new mushroom-style fins atop of the serrated footplate at the front (white arrow), guide fins on the outer edge of the assembly (red arrows) and more vertical fins on the floor beside the sidepods undercut (blue arrow). 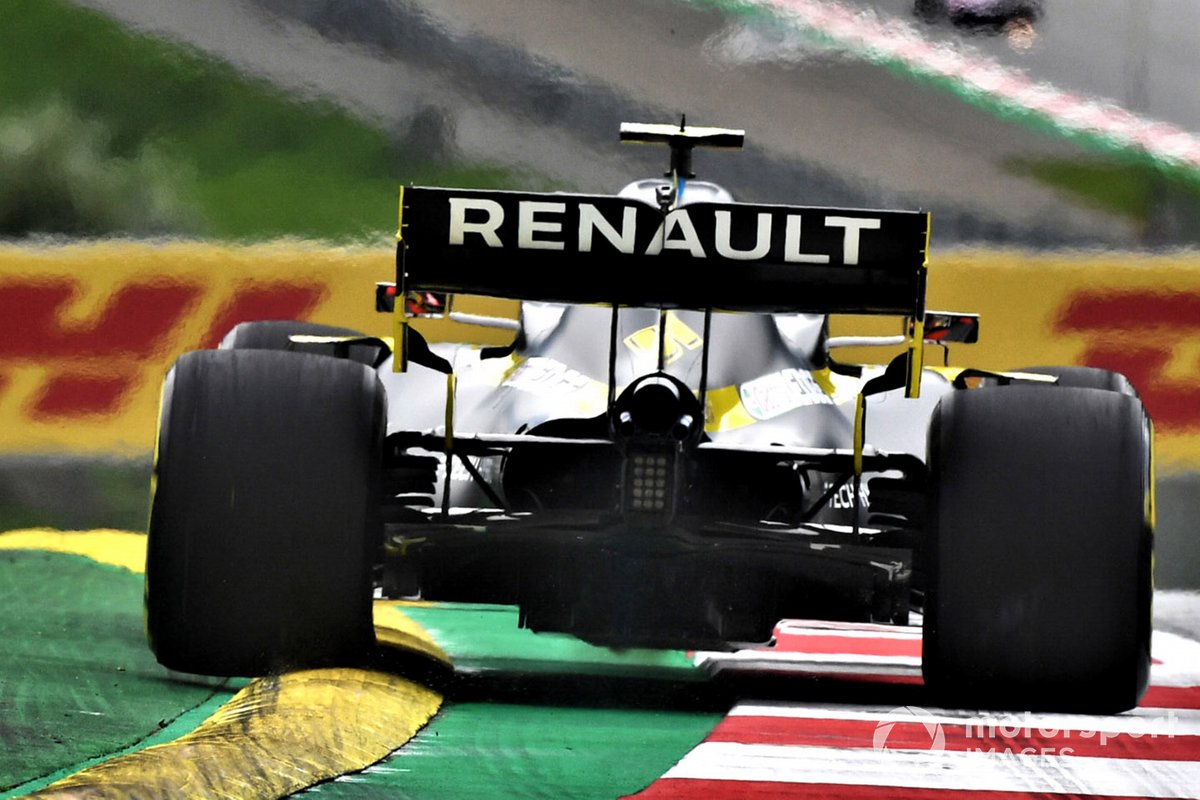 A rear-end shot of the Renault RS20 shows off the size of the rear cooling outlet to deal with the altitude demands of the circuit. This view also gives us a good idea of how the airflow spilt from the sidepod wings would impact the face of the rear tyre. 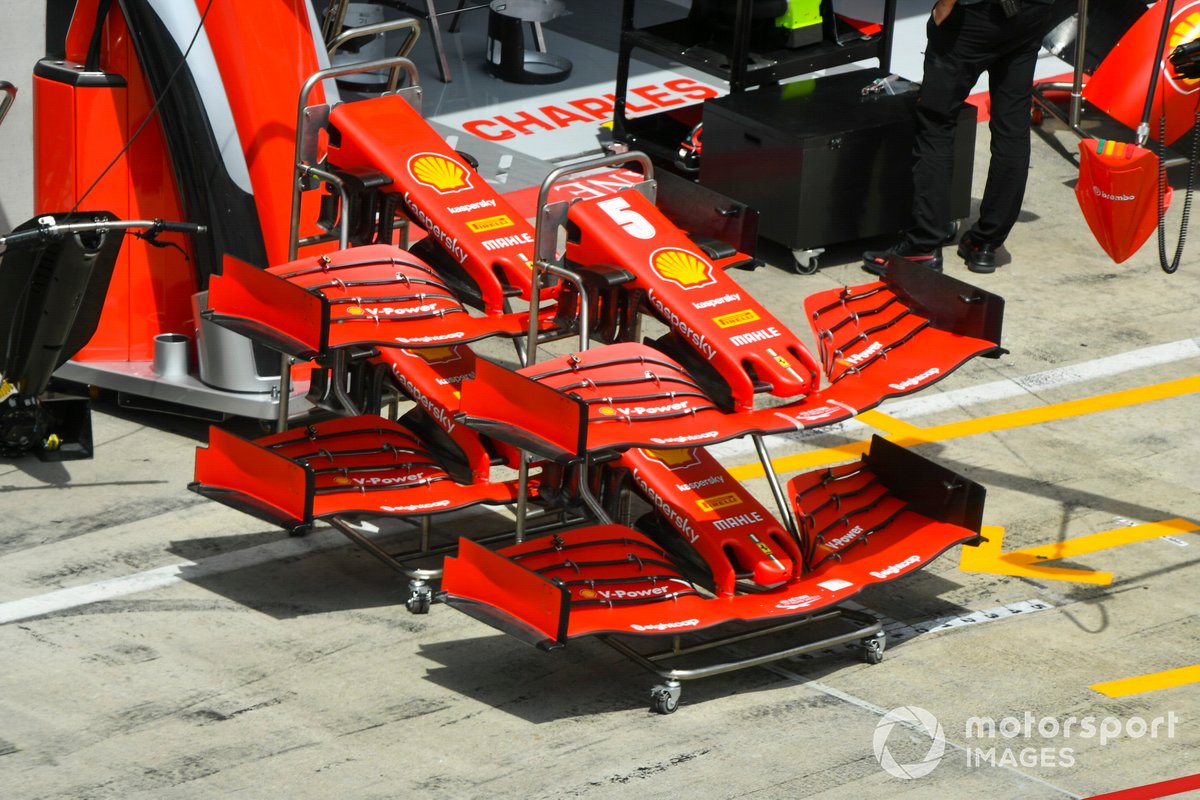 Ferrari front wings stacked up outside their garage awaiting the weekend’s track action. 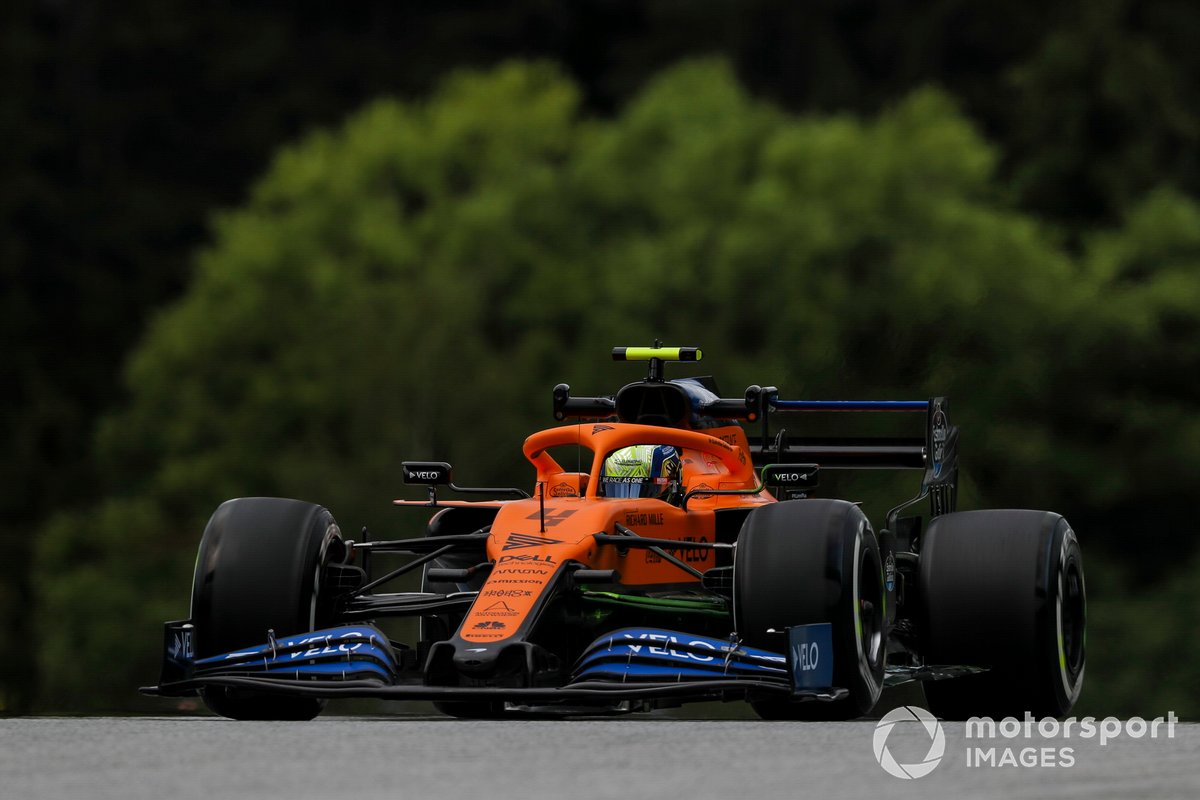 The McLaren MCL35 with flo-viz paint on the front suspension and steering arm. The team has additional camera equipment mounted on the roll hoop pods to capture infra-red tyre temperature data. 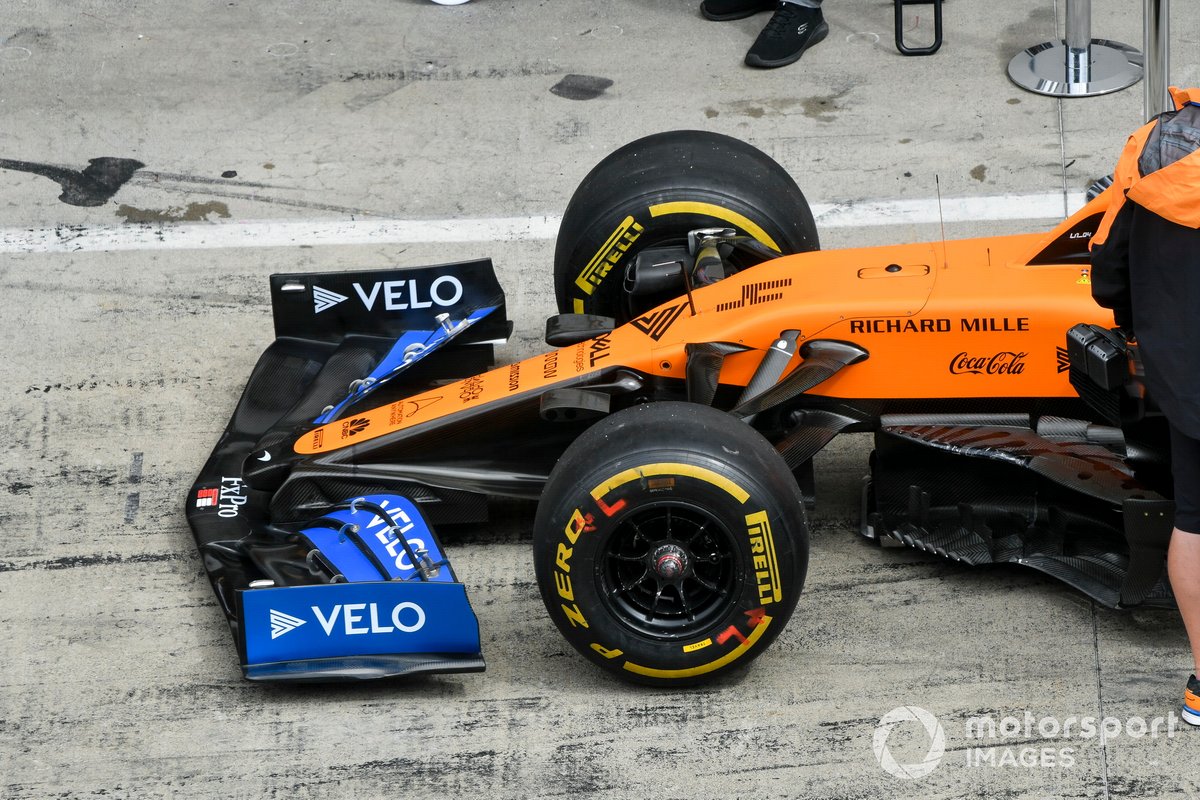 A look at the front end of the McLaren MCL35, note the shape of the front wing footplate which will alter the shape and speed of the vortex that’s shed from the surface differently than if it were one continuous shape. 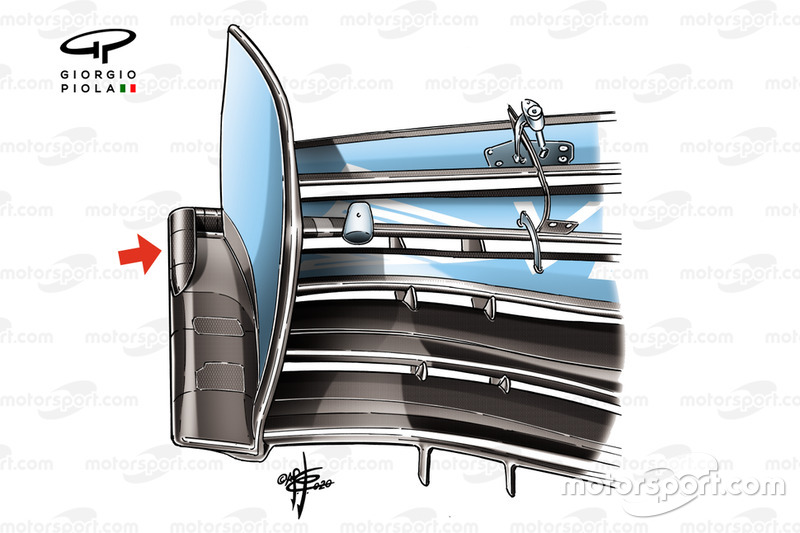 Here’s a forward view of that footplate, as illustrated by Giorgio Piola during pre-season testing. 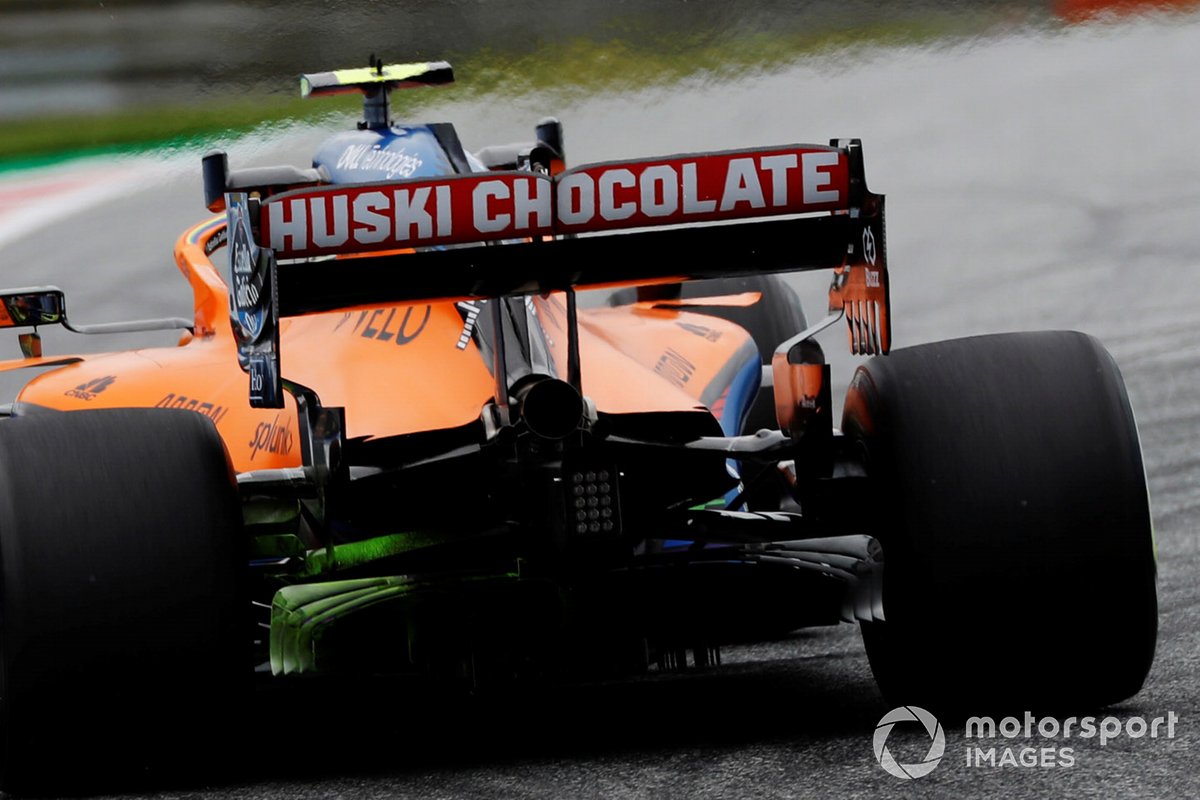 A close up of the McLaren MCL35 which has been painted with two variants of flo-viz in order that the team can collect more data. 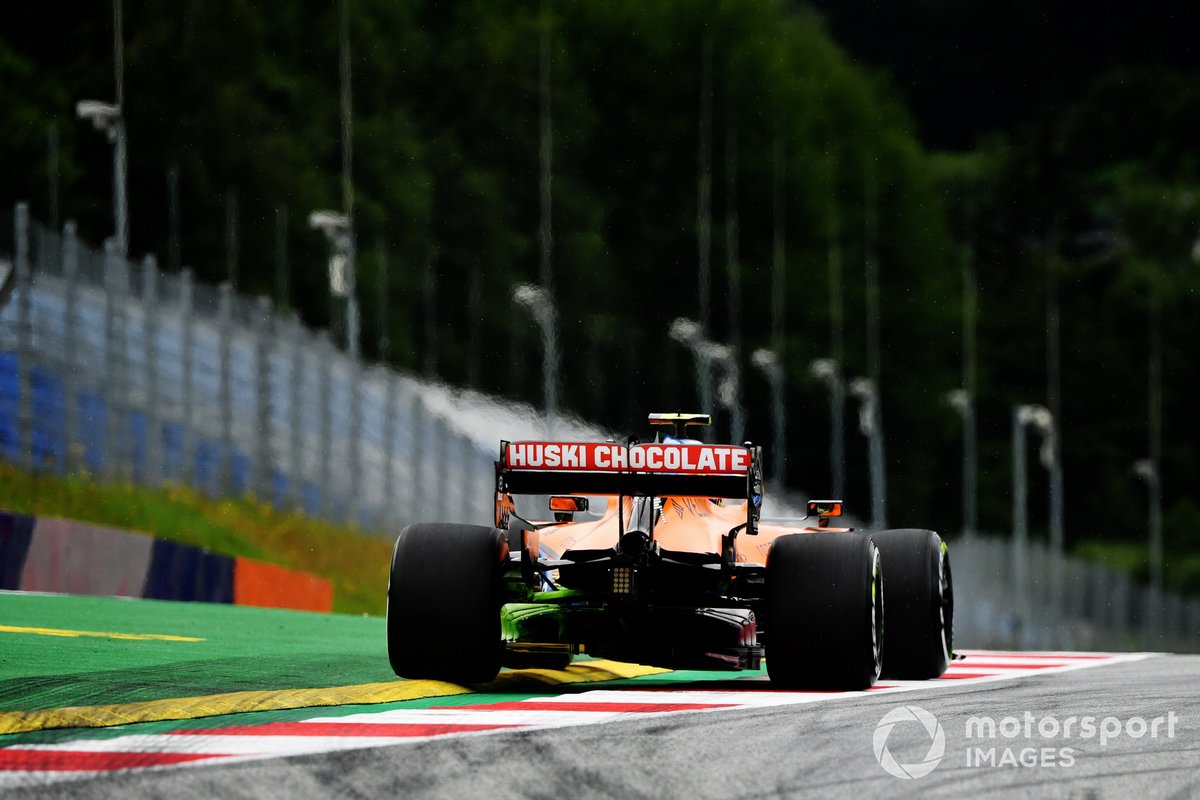 A wider angle shot of the McLaren MCL35 with the diffuser painted with two types of flo-viz. 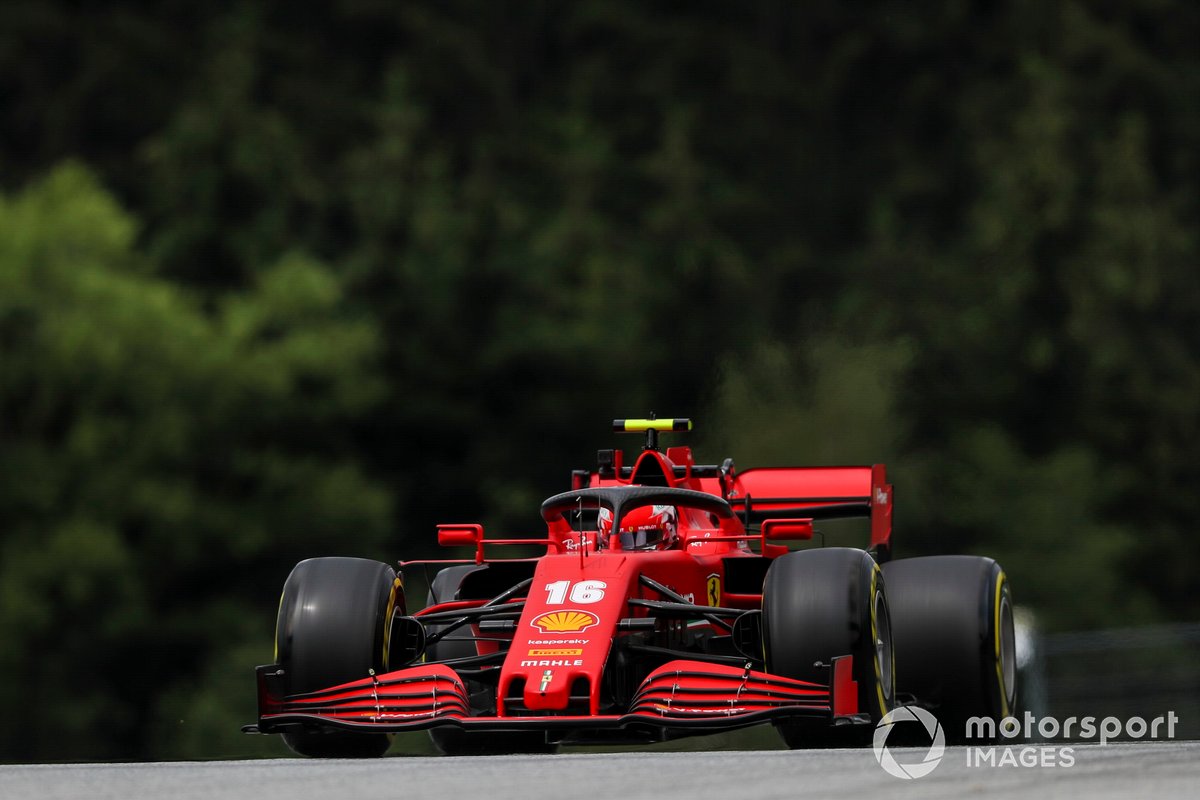 Charles Leclerc behind the wheel of his Ferrari SF1000, note the camera mounted on the roll hoop pod on the right-hand side of the car. 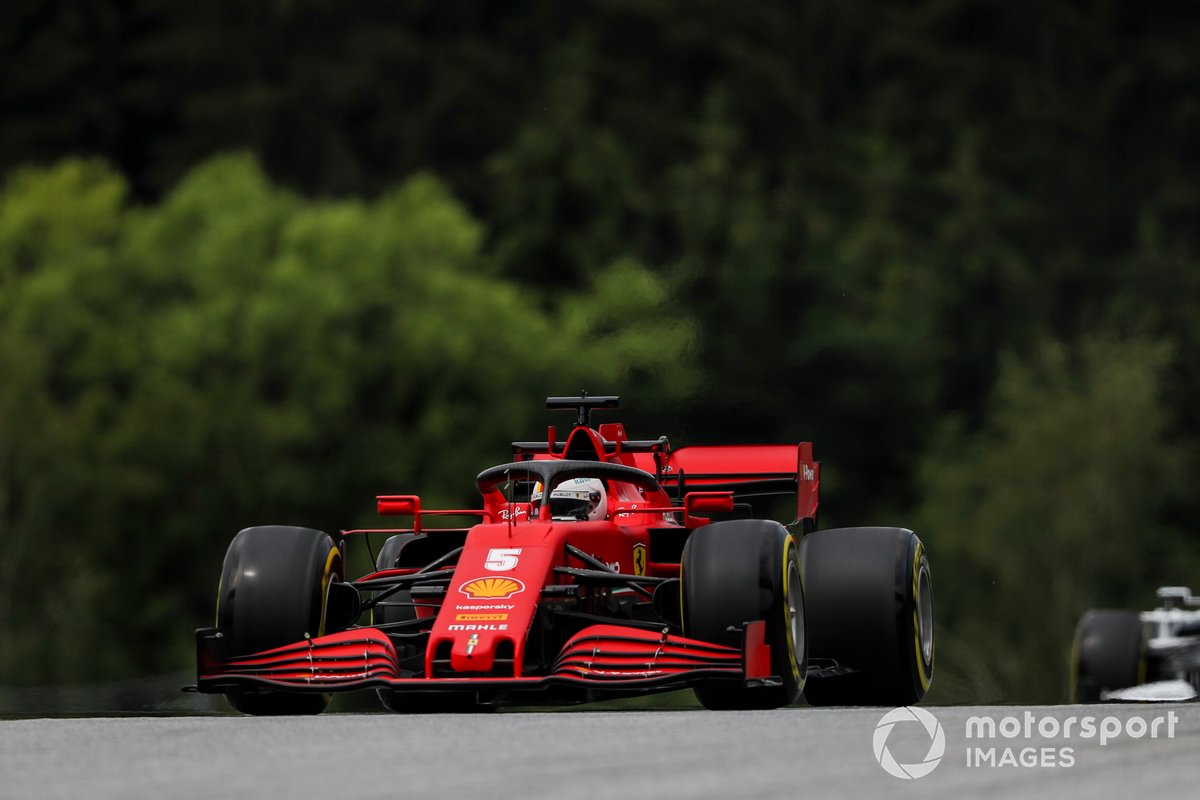 In comparison Sebastian Vettel’s SF1000 is outfitted with a different set of camera pods, in which the team has additional infra-red cameras mounted for monitoring tyre temperatures. 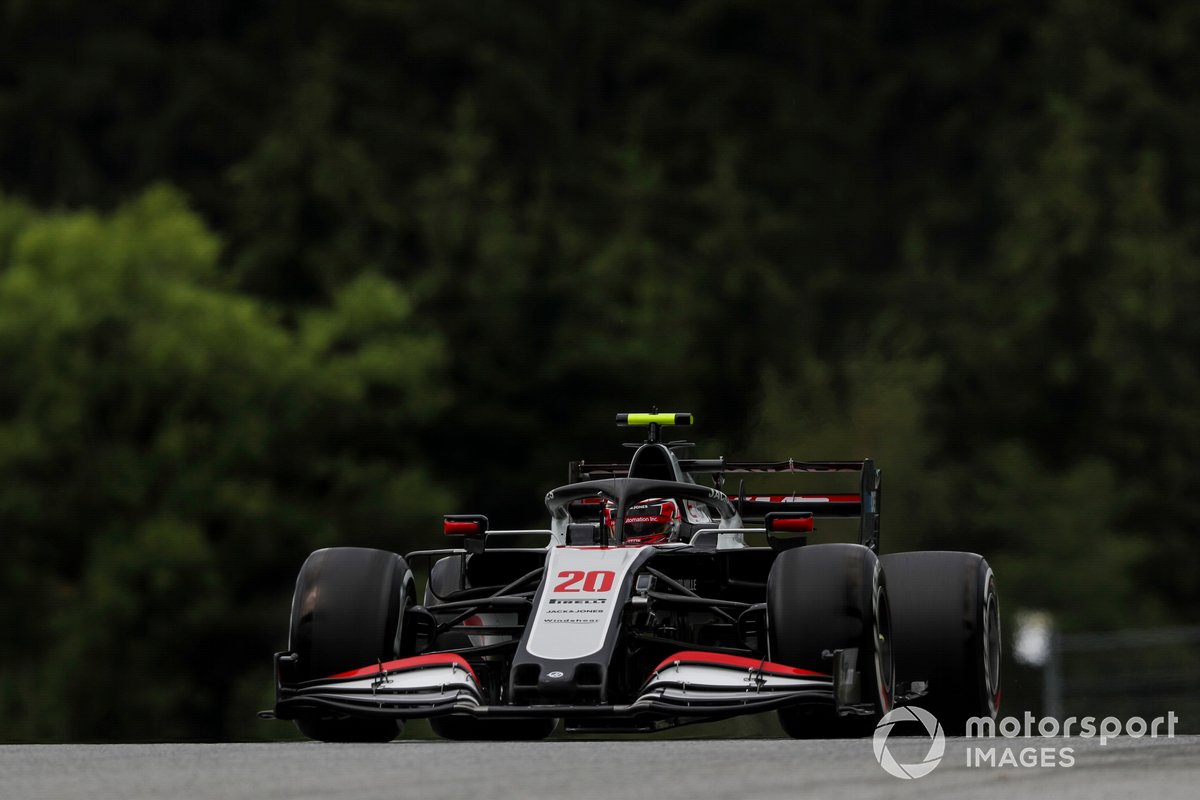 The Haas VF-20 of Kevin Magnussen with another camera mounted on top of the left-hand front camera pod. Also note the shape of the upper rear flap around the slot gap separator. 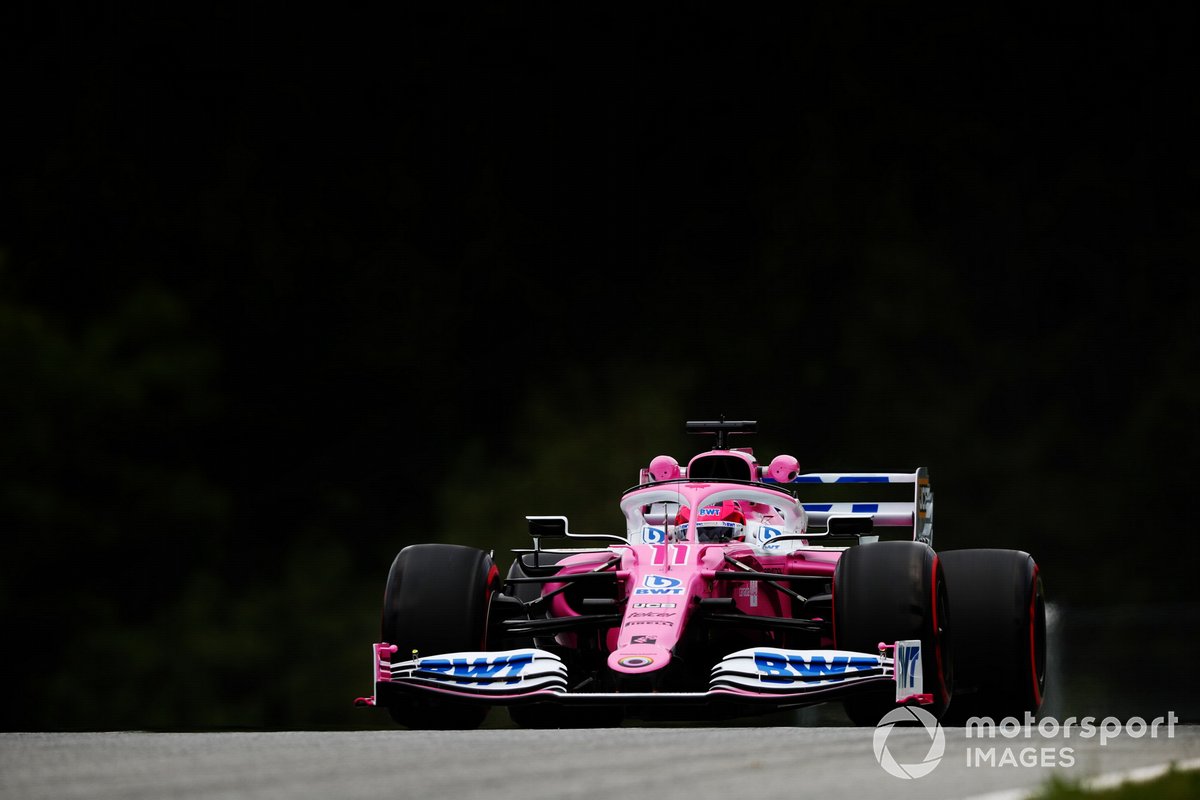 The Racing Point RP20 outfitted with larger camera pods beside the roll hoop which incorporate infra-red cameras for monitoring tyre temperatures both front and rear. 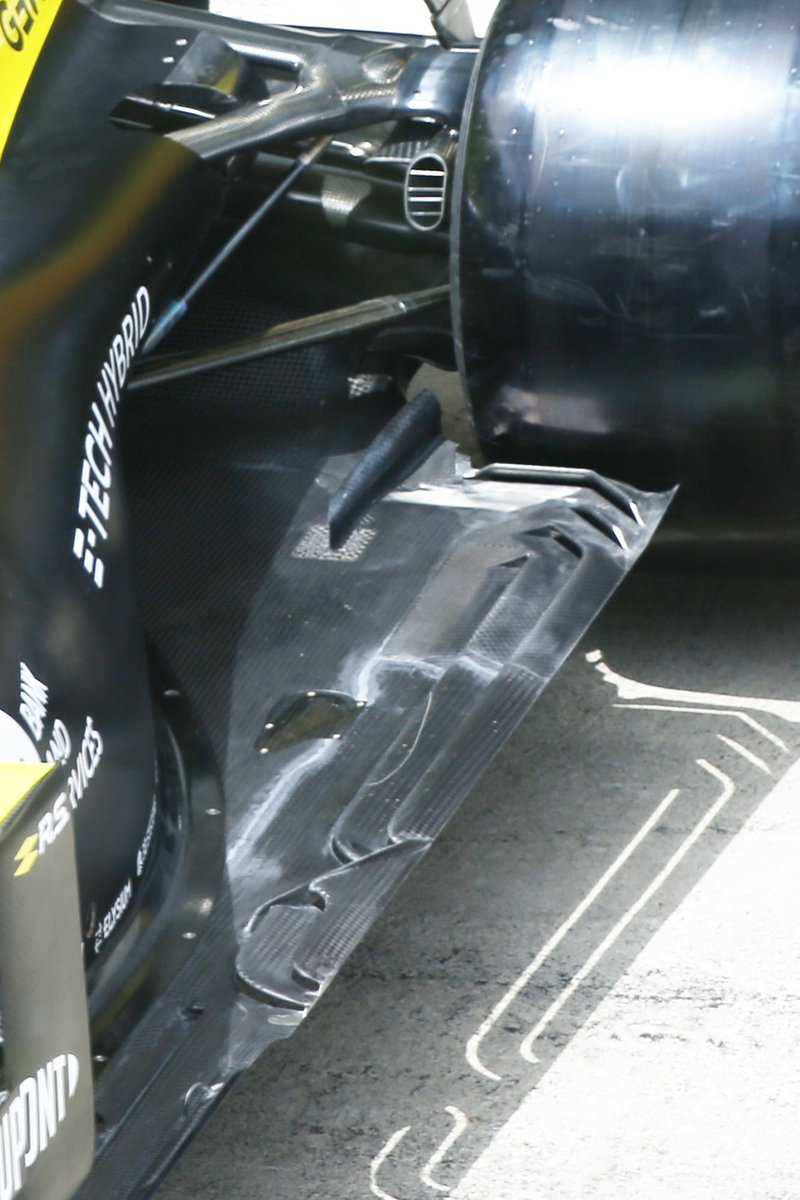 A new floor for Renault includes alterations to the fully-enclosed holes parallel to the floor’s edge. 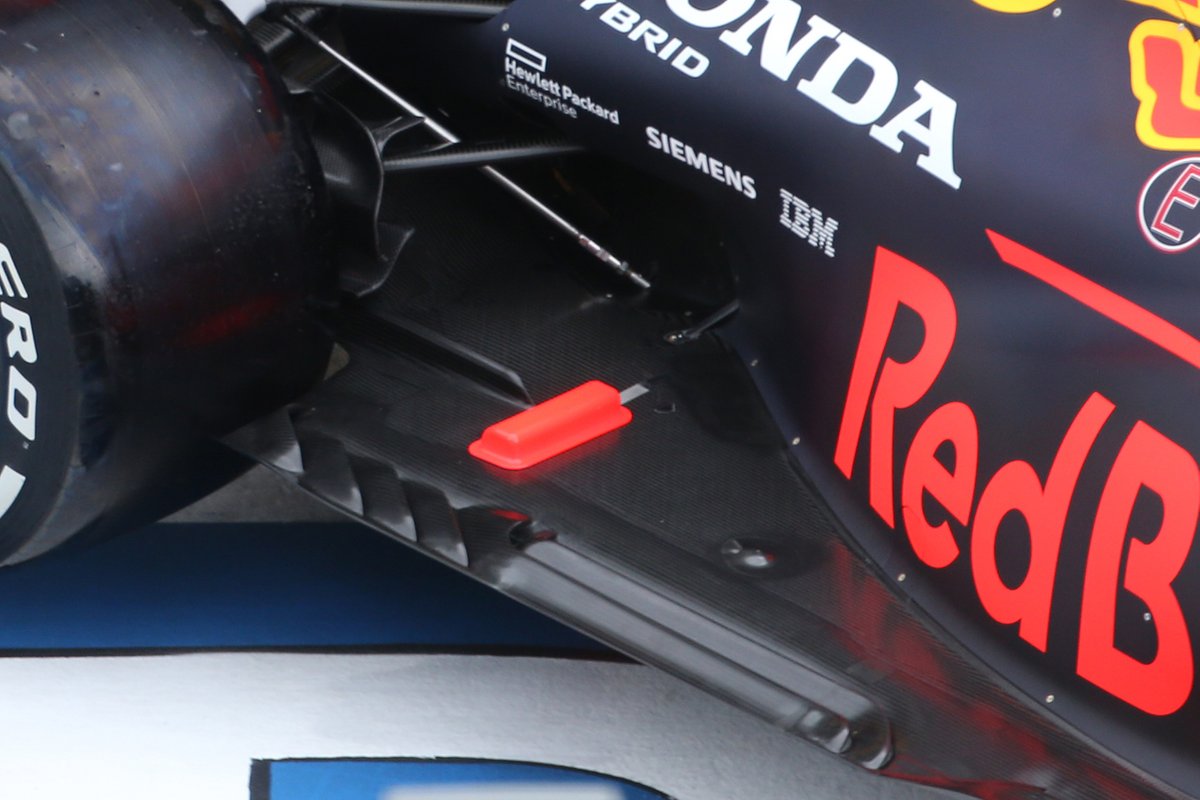 A look at the RB16’s floor and the slots ahead of the rear tyre and parallel to its edge which help to improve aerodynamic performance by ‘sealing’ its edge. This is the specification used during pre-season testing, not the new one seen at the recent filming day. 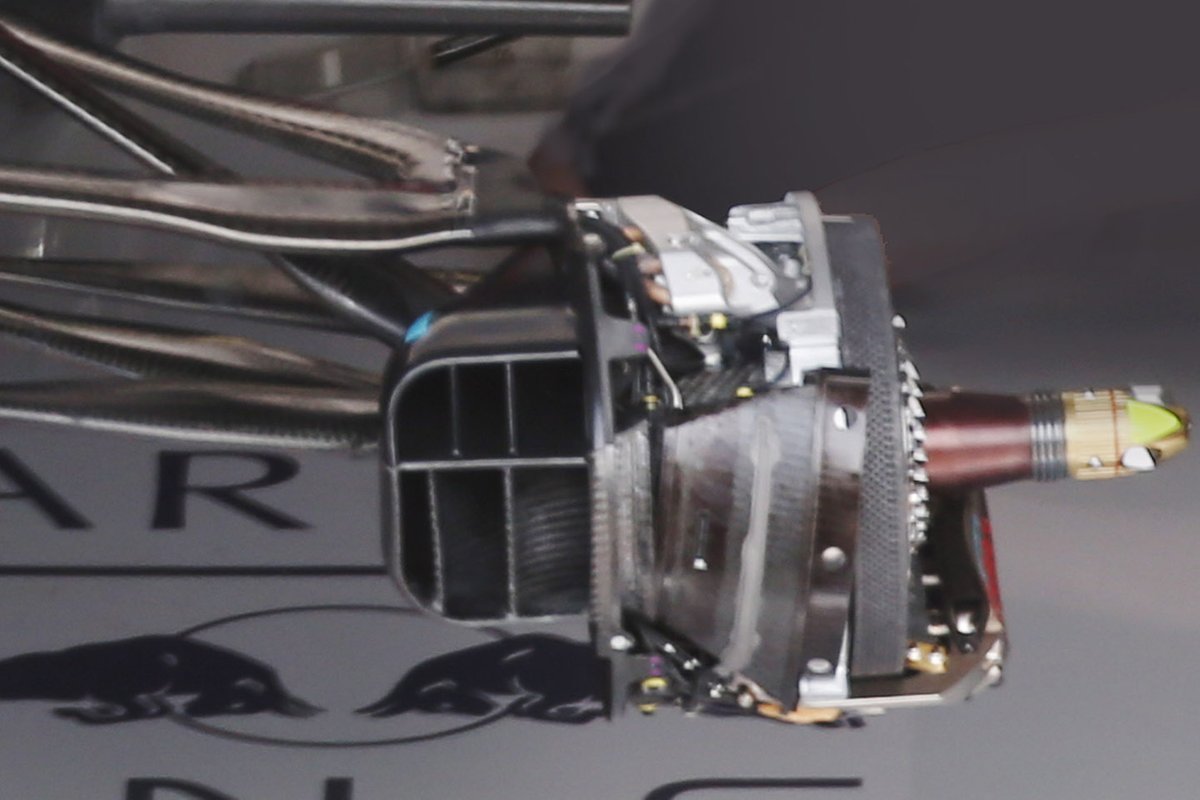 An overview of Red Bull’s front brake duct with the extremely large scoop which helps to collect airflow and distribute some of it for cooling the brakes and the rest for aerodynamic purposes – ejecting airflow out of the wheel face in order to alter the wake shed by the tyre. 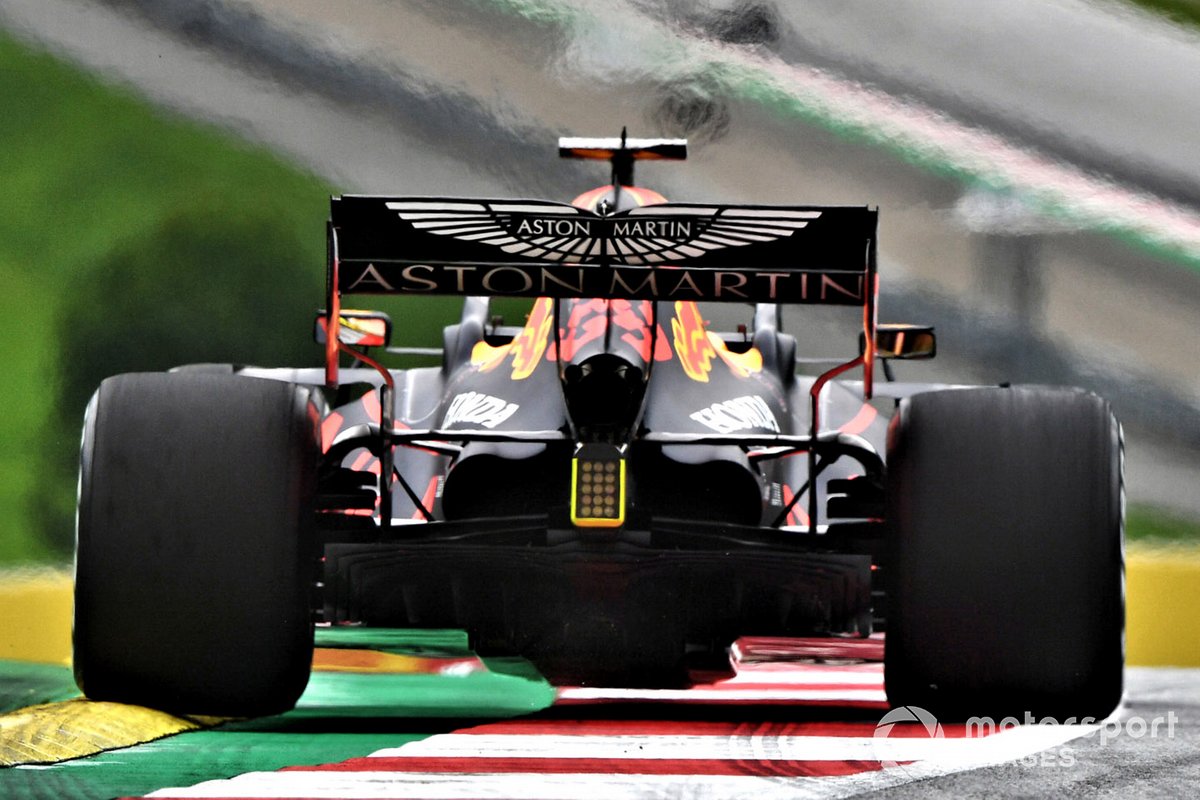 A look at the rear end of the RB16 and I’ve lightened the original image so that you can see the detail of the diffuser, especially the multi-part Gurney-like extensions that surround it. 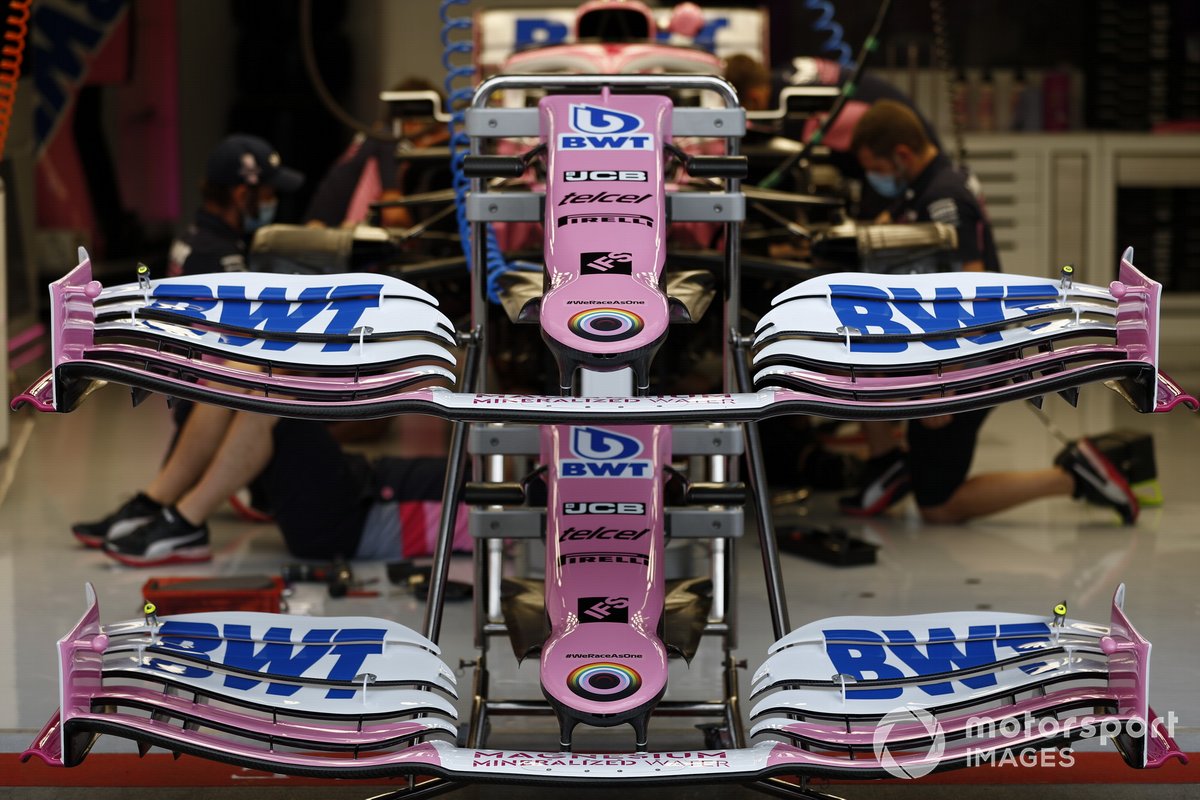 Racing Point front wings stacked up outside the garage.

Related posts:
Rast only at “40-50 percent” after first Audi FE test
Here’s the SCV12 Before You’re Supposed to See It… Sorta
Best News
Hyundai, Kia fined Rs. 1533 Cr. in USA
11/30/2020
FBI: No crime committed as ‘noose’ rope was there in 2019
06/23/2020
Why VW Pulled The Plug On A 400bhp VR6 Arteon R
06/23/2020
2021 Kia Grand Carnival breaks cover – solid looker! – paultan.org
06/24/2020
New Volkswagen Arteon Shooting Brake arrives as part of facelifted line-up
06/24/2020
Recent Posts
This website uses cookies to improve your user experience and to provide you with advertisements that are relevant to your interests. By continuing to browse the site you are agreeing to our use of cookies.Ok