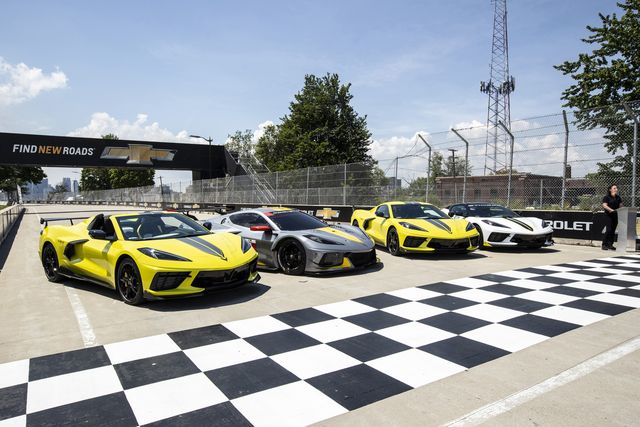 The eighth-generation Chevrolet Corvette is one of the best sports cars you can buy today, regardless of price. It being a a bargain is only made more interesting by its supremacy on the race track in the 2020 IMSA season. While there’s no doubt that owning a C8.R would be near the top of any sports car or Corvette fan’s list, there are minor federal regulations keeping you from driving this race car on the road. Giving you the next best thing, the folks at Corvette are releasing special editions of the road-going ’Vette that celebrate the No. 3 and No. 4 C8.R race cars.

As you’d imagine, these special-edition cars are designed to look like the IMSA race machines. Based on the top-rung 3LT trim and equipped with the performance-focused Z51 package as standard issue, these special-edition Corvettes won’t be budget builds. Adding to the already respectable features, Chevy will add a high-wing spoiler, yellow brake calipers, carbon-flash mirrors, and black trident wheels that feature the Corvette Racing “Jake” logo.

These special-edition Corvettes will come in two colors: accelerate yellow and hypersonic gray. The yellow ’Vettes sport gray graphics and mimic the No. 3 C8.R. Gray cars have yellow graphics mirroring the No. 4 machine. Combining these limited finishes with the extra racing-inspired accents, and you’ll have your own, road-going C8.R. Making sure that people know you have the special edition, Chevy is also including a car cover with the image of the special-edition car rendered on the material.

Chevy isn’t ripping the interior out of these Corvettes to give you the harsh experience of life in a race car. In fact, they have among the nicest interiors available in a Corvette. Chevy says the GT2 seats are standard issue, but competition sport seats are available if you need a more aggressive seat. And just like the exterior, there are only two colors available for the cockpit: strike yellow or sky cool gray. The colors reflect the exterior to help hammer home your racing livery.

These special-edition Chevrolet Corvettes are unquestionably cool, but should performance-minded buyers hold out until the Z06 makes an appearance? Let us know in the comments below.