It’s unlikely anyone threw a hissy-fit when Fred Lorenzen won the 1965 Daytona 500. Scheduled for 200 laps, the Valentine’s Day race was interrupted by rain at lap 81, then interrupted again—this time for good—at lap 127. Since the race was past halfway and there was zero chance of finishing before darkness, NASCAR’s preeminent event was called official as Lorenzen hoisted the trophy.

Three-plus years later, Buddy Baker was leading at lap 255 when rain forced officials to stop the 1968 Coca-Cola 600 at Charlotte Motor Speedway. When better weather was nowhere on the horizon, the 400-lap race was called official, giving Baker the second of his 19 career victories. Fans probably muttered “oh, well … that’s racing” as they left the track around dusk.

Now jump 19 years, to the 1987 Southern 500 at Darlington Raceway. NASCAR icon Dale Earnhardt was leading the Labor Day weekend race when rain forced a stoppage after 183 of a scheduled 367 laps. The race resumed briefly after an hour or so, but another series of showers finally ended it after 202 laps. Nobody ever said Earnhardt didn’t fairly earn that victory.

Surely, you see a pattern here. It is this: Monday’s rain-shortened YellaWood 500 at Talladega Superspeedway was the latest of 52 Cup Series race stopped short by rain and/or darkness in the modern era, dating to 1972. Whether you agree with that ages-old NASCAR policy depends entirely on whether your favorite driver was leading or chasing at the time.

Lorenzen, Baker, and Earnhardt are among the big-name drivers whose career record includes weather-shortened races. Bubba Wallace is the latest, leading only the final five laps after a caution and persistent rain stopped the 188-lap race after just 117 laps on Monday afternoon. By rule, that made the race complete and Wallace the winner for the first time in his career.

And by the way: that also happened to Aric Almirola at Loudon just this past July and to Chase Elliott at COTA back in May. If memory serves, those victories were accepted as official without much public fuss and absolutely no outrage.

It also happened to Denny Hamlin at Darlington in May 2020, to Justin Haley at Daytona Beach in July 2019, to Clint Bowyer at Michigan in June 2018, to Carl Edwards at Texas in November 2016, and to Chris Buescher at Pocono in August 2016. 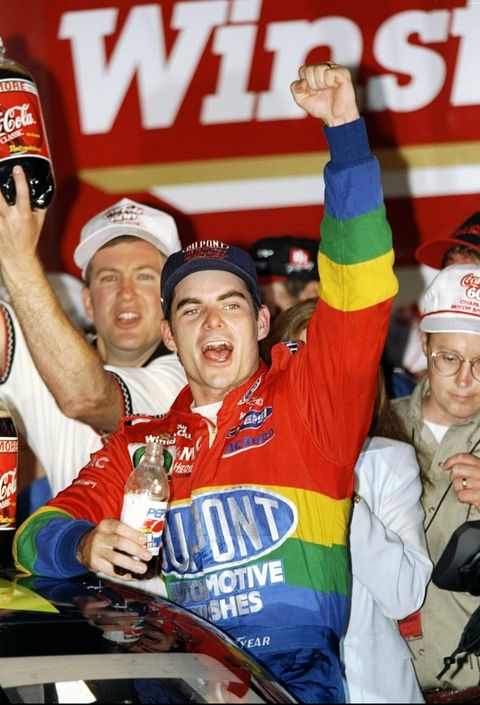 In fact, almost three dozen drivers since 1972 have won weather-shortened races. Five of Jeff Gordon’s 93 career victories came that way. Four of Darrell Waltrip’s 84 came when rain or darkness was a factor. Rusty Wallace, Jeff Burton, Tony Stewart, Kurt Busch, and Cale Yarborough each won three shortened races. Sterling Marlin and Richard Petty each won twice because of rain or darkness. Twenty-four other drivers have one weather-influenced victory, including eight in the NASCAR Hall of Fame.

It’s unlikely any of those winners—not even including those in the 1950s and 1960s, before the “modern era”—faced the unseemly backlash Wallace faced on Monday night.

From the small group of haters unleashing an unrelenting barrage of racist vitriol on social media, the 28-year-old Alabama native caught it from all sides. Not surprisingly, the conspiracy theorists weighed in with preposterous claims that future teammate Kurt Busch let Wallace win (yeah, right) and that NASCAR quickly called it official before conditions improved (they never did). The only idiocy missing was that NASCAR summoned rain after Wallace took the lead.

Thankfully—and predictably—the larger NASCAR family and the more enlightened ticket-buyers appreciated what Wallace had just done. For several months this spring and summer the sport’s only full-time Black driver distanced himself from most social media platforms. Before, he often scanned sites after a race and almost always worried about what fans thought of him. Mostly, those Neanderthals used race to denigrate him no matter the situation. (Many of them probably hated Tiger Woods for the same reason; ironically, hardly anyone hates team co-owner Michael Jordan).

“After a bad race, I would become one of those haters that doesn’t know anything,” Wallace admitted in Monday’s post-race media session. “I would become one of them … telling myself a bunch of dark thoughts. It never helped anything. I said for good (I should) get off the main pages, go out and enjoy life, don’t (tolerate) people like that.

“I’m not going to be able to please everybody. Doesn’t matter if I won by a thousand laps or won a rain-shortened race, not everybody is going to be happy with it. That’s okay because I know one person who’s happy and that’s me because I’m a winner and they’re not.”

Wallace’s acceptance speech into the brotherhood NASCAR Cup Series winners couldn’t have been more spot-on. He seems genuinely liked by his garage peers, a modest, good-humored, sincere, humble, and committed man who neither seeks nor avoids undue attention. He appreciates the eight years and 318 combined starts it took him to get to Victory Lane after a Cup race.

“This is for all those kids out there who want to have an opportunity, whatever they want to achieve and be the best at what they want to do,” he said. “You’re going to go through a lot of bulls—, but you’ve always got to stay true to your path and not let the nonsense get to you.

“Stay strong, stay humble, stay hungry. There were plenty of times I wanted to give up. But you surround yourself with the right people and it’s moments like this that you appreciate.”

Team co-owner Denny Hamlin feels Wallace’s decision to abandon social media was important. “We talked about and I think it was the best decision ever,” he said. “Ultimately, I get hate tweets as well because I hired him. Those people just need to grow up and appreciate the accomplishment the kid just had. He drove it to the front and the caution came out. There’s not much else you can do. He played the racing lines right, got around us there, and got the win.”

As for Wallace’s detractors: “They have a microscope on him because they want to be critical,” he said. “They’re just haters; that’s all you can really say about it. I try to say to him, ‘Don’t get your motivation trying to prove haters wrong. Instead, get your motivation from trying to do the people that support you proud.’

“That’s where the motivation is going to come from … the people who are going to support you through the good times and the bad times. I’m sure today is a big day for them because when they wear their Bubba Wallace shirt, they know I’m putting myself out there. Those people deserve a great day today.”

And they got it, fair and square. Get over it.