At Last, the FIA Is Asking F1 Fans to Stop Racially Abusing Hamilton

F1’s first sprint qualifying weekend has been one of its biggest for a long time. Fans were allowed to flock back to Silverstone, a new format had created a nice buzz, and the “biggest moment of the 2021 championship” happened on the first lap of the British Grand Prix, or so commentators say.

After starting from pole and second place, Max Verstappen and Lewis Hamilton battled alongside each other off the line, managing eight corners without colliding. Things changed when the duo reached Copse, an incredibly high-speed right-hander, however, and Hamilton’s front left tire made contact with Verstappen’s right at over 180 mph. This sent Verstappen into the tire barriers for a reported 51G impact. 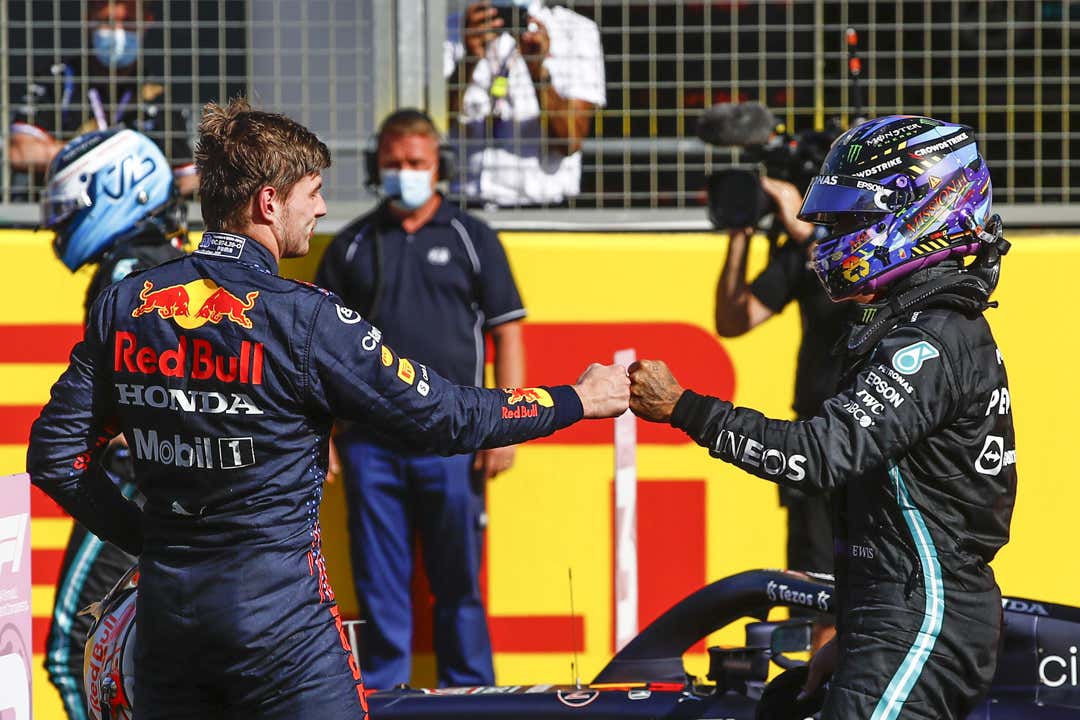 Verstappen was, luckily, okay. He was extracted by F1’s medical team and escorted to an ambulance to be taken to the on-site medical center before being shuttled to Coventry hospital for further checks. The race was red-flagged to be able to repair the tire barriers.

This is when things started getting ugly on social media. Fans will argue about who was responsible for an incident, and so will teams. Both Toto Wolff and Christian Horner stuck their oars in, as is their job as team principals. Horner was also clearly scared for his lead driver, and rightfully so.

It’s one thing to debate racing incidents and a completely different one to be racist, however. Lewis Hamilton, as the only black F1 driver, gets plenty of the latter. A report published last week showed racism is endemic in the sport. Things got so bad yesterday following the crash, that F1 and the FIA had no choice but to pay attention and issue a statement, telling fans to stop racially abusing Hamilton.

“During, and after, yesterday’s British Grand Prix, Lewis Hamilton was subjected to multiple instances of racist abuse on social media following an in-race collision.

Formula 1, The FIA and Mercedes-AMG Petronas F1 Team condemn this behavior in the strongest possible terms. These people have no place in our sport and we urge that those responsible should be held accountable for their actions. Formula 1, the FIA, the drivers, and the teams are working to build a more diverse and inclusive sport, and such unacceptable instances of online abuse must be highlighted and eliminated.”

Hamilton asked immediately after the crash if Verstappen was ok and looked visibly shaken by it during the red flag period. He knows, as all F1 drivers know, exactly how dangerous a high-speed crash is.

Whether you think fans in Silverstone’s grandstands cheered Verstappen’s crash (it seems like they didn’t, despite social media hyperbole) or whether you agree with Verstappen that Hamilton celebrating his win while he was in hospital wasn’t the right thing to do, that doesn’t excuse racism.

Hamilton could have done much worse and racism still wouldn’t be justified, it never would be. Black athletes don’t earn the right not to be racially abused via sportsmanship, it’s something that should never happen. But it happens all too often, sadly, as we all learned from the recent situation involving Black soccer players during the Euro 2020 final match between Italy and England.

It’s a human right to be judged for your actions and achievements, but not the color of your skin. If you want to call Hamilton aggressive or uncompromising (he is, after all, an F1 driver) that’s one thing; but it seems that many fans immediately leap to racial abuse.

Got a story tip? Mail me on [email protected]