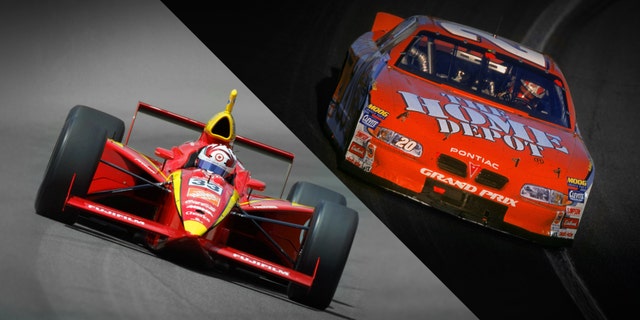 While there potentially may be more drivers who will one day attempt to do “The Double” —running the Indianapolis 500 and Coca-Cola 600 on the same day—it’s a big ask that they will be able to run all 1,100 combined miles.

To date, only one driver has done that: Tony Stewart, who completed both races on May 27, 2001, finishing sixth at Indy (in what would also be the final IndyCar race of his career) for Chip Ganassi Racing and third at Charlotte for Joe Gibbs Racing.

“(Having) completed all 1,100 miles of Double Duty is something I’m really proud of,” Stewart said. “It makes for a very, very long day. When you’re done with the 600, after running Indy and the flight and helicopter rides and police escorts and all that during the day, you’re very, very content to lay your head on a pillow. And even when you do that, it still feels like it’s not stopped moving yet.”

There was some angst, however, in Stewart’s effort. As is common in Indianapolis at the end of May, rain briefly stopped action in the 2001 500. Had the rain continued, Stewart was committed to leaving Indy and heading to Charlotte—even if he had been leading the 500! As it turned out, the rain stopped (with Stewart in the lead), the 500 resumed and he was able to finish sixth before hopping a plane to Charlotte.

“The one part of it that was pretty traumatic was the point where we actually were in the lead of the race at Indy and the rain delay came and then I got a cramp in my leg at the same time during the red flag,” Stewart said. “The hard part was knowing that we had a hard time to leave that was non-negotiable. It didn’t matter if I was leading by five laps, at a set time we had to leave, whether I was leading the Indy 500 or not.

Courtesy of Wikipedia, here’s a breakdown of Stewart’s itinerary on the day he made “The Double” history:

Stewart initially tried The Double in 1999, finishing fourth at Indy (fell four laps short) and fourth at Charlotte (completed all 400 laps). While rumors abounded that he started hallucinating in the final 100 laps of the 600, it was actually more of a stomach issue.

Then, Stewart added with a laugh, “It was early in the race and there wasn’t a drive-thru in sight.

“We actually tried to get one of Bobby Labonte’s PowerBars—tried to get something in me to tide me over until the race was over. It didn’t work. I got two bites of it and two bites did not make it the next 350 laps around Charlotte. It was a good learning experience.”

Indeed, when 2001 rolled around, Stewart was much more prepared.

“We had a nutritionist who was with us the entire month of May, so I was in a lot better shape,” Stewart said. “The first year, my girlfriend drove me home and I was sick the whole ride.

Three other drivers have attempted The Double but all have come up short in finishing all 1,100 miles across both races on the same day:

* The late John Andretti was the first to attempt the feat on May 29, 1994. He finished 10th at Indianapolis but finished 36th in Charlotte, failing to finish after engine failure ended his day just past the halfway mark of the 400-lap event.

* Robby Gordon has raced The Double the most of any driver, doing so five different times. His first attempt was in 1997, but rain washed out the 500 and pushed the race back to Monday. Gordon, meanwhile, flew to Charlotte and finished 41st after wrecking on Lap 186 of the rain-shortened 333-lap race. He returned to Indy, but rain pushed it back yet another day to Tuesday. He finished 29th, dropping out due to a fire.

Gordon tried again in 2000. Rain delayed the start of the race, but Gordon still managed to finish sixth. He flew to Charlotte and took over from P.J. Jones and finished 35th, 11 laps down.

In 2002, Gordon wound up eighth at Indy, 16th at Charlotte, finishing a heartbreaking one lap short of completing both races. In 2003, he came up short at Indy, finishing 22nd due to gearbox issues, and 17th at Charlotte—the race was called official after just 276 laps due to rain.

He made his fifth and final attempt in 2004 (left Indy during a rain delay, Jacques Lazier took over but dropped out after 88 laps due to a broken axle, while Gordon finished 20th at Charlotte).

* The most recent driver to attempt The Double was Kurt Busch in 2014. He did an outstanding job, finishing sixth at Indy, but a mid-race engine failure at Charlotte ended his day prematurely.

Who will be the next driver to attempt The Double? Two-time NASCAR Cup champ Kyle Busch has expressed significant interest in following in his older brother’s footsteps.

But expressing interest and actually doing it are two entirely different things. The younger Busch could have problems due to logistics, particularly getting approval from both Joe Gibbs Racing and its sponsors.