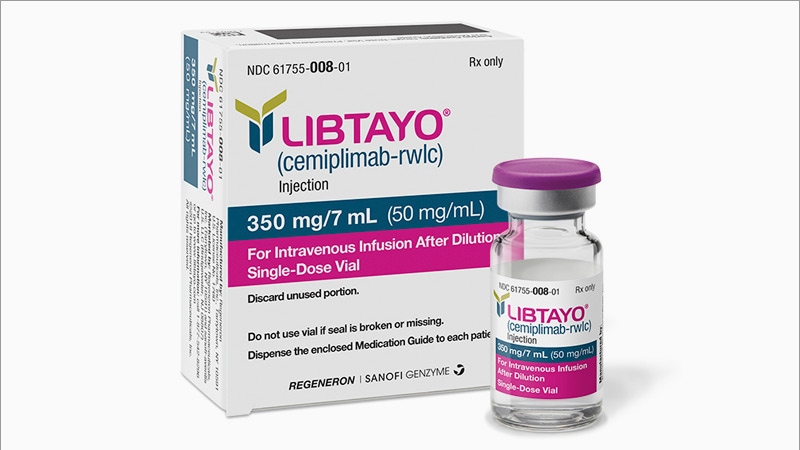 A new approval from the US Food and Drug Administration (FDA) expands the use of the immunotherapy PD-1 inhibitor cemiplimab-rwlc (Libtayo) for patients with non–small cell lung cancer (NSCLC).

The new indication is for use of cemiplimab in combination with chemotherapy as a first-line treatment for patients with advanced NSCLC and tumors without mutations (no EGFR, ALK, or ROS1 aberrations) who are not candidates for surgery or definitive chemoradiation therapy. This indication specifies that the combination can be used irrespective of PD-LI expression or histology.

Cemiplimab was already approved for use in NSCLC, but the previous indication was for use as monotherapy as a first-line treatment for patients who were similar but whose tumors tested positive for high levels of PD-LI expression.

“This second FDA approval for cemiplimab-rwlc in advanced NSCLC greatly broadens the scope in which a cemiplimab-rwlc-based regimen can be prescribed to encompass a wide range of patients, metformin er 1000 mg osm either as single agent in those with PD-L1 ≥50% or now in combination with chemotherapy irrespective of PD-L1 expression or tumor histology,” said David R. Gandara, MD, professor emeritus and senior advisor of the Thoracic Oncology Program at the University of California, Davis, Comprehensive Cancer Center. He was commenting in a company press release.

However, another lung cancer expert questioned the new approval. “I wish FDA decisions were based on actual impact on & benefit to practice. Not every approval matters,” commented Jack West, MD, associate clinical professor at City of Hope Comprehensive Cancer Center in Duarte, California, and regular Medscape columnist. He was reacting on Twitter to the announcement.

The new approval in NSCLC is based on a phase 3 trial that was “designed to closely resemble a patient population with varied disease presentations that physicians manage in everyday clinical practice. Even with these diverse disease presentations, cemiplimab-rwlc combined with chemotherapy demonstrated a marked increase in overall survival, at a median of 22 months versus 13 months with chemotherapy alone. Clearly, this is an advance which is clinically meaningful for our patients with advanced stage NSCLC,” Gandara said in the statement.

However, West took issue with the design of the trial and suggested that the comparator arm in which patients were given placebo and chemotherapy was “unethical to offer patient.” He pointed out in a Twitter thread that “chemotherapy alone has been substandard since 2018.”

That phase 3 trial was the EMPOWER-Lung 3, conducted in 466 patients who received platinum-doublet chemotherapy and were randomly assigned in a 2:1 ratio to receive either cemiplimab 350 mg or placebo intravenously every 3 weeks.

The overall response rate was 43%, vs 23% with placebo, and the duration of response was a median 16 months, vs 7 months with placebo.

West added one amendment to his comments on Twitter. “If cemiplimab offers comparable activity & toxicity profile but meaningfully lower price, that a real incremental benefit…,” he wrote on the Twitter thread.

Later, he added that he has been “told that the price of cemiplimab is 11% lower than other options.

“That’s arguably in the ballpark where it would be a meaningful benefit. Not a crushing difference, but perhaps enough to represent an incremental benefit,” he commented.