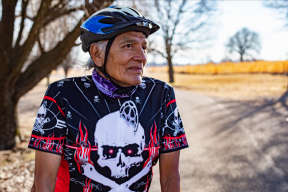 “I’m proudly the last person anyone would think of as being fit or even alive in late life,” says Simeon Gipson. Half Cherokee and half Choctaw, he grew up in Oklahoma on a Cherokee reservation, jenny craig and alli where he contracted polio as a child. He learned to ride a bike then but never rode recreationally until he was in his 50s. Pain, he says, led him to retire early from his job in the medical-legal section of the Cherokee Nation W. W. Hastings Indian Hospital—he’d had a knee replacement and shoulder surgeries. That put him in the same position as lots of his contemporaries. Nearly a quarter of people between 65 and 84 have chronic pain almost every day that gets in the way of their jobs and their lives. Plus, Gipson had gained weight, and he found out he was severely diabetic—and diabetes can be more complicated to manage as you age.

But the thought of sticking himself with needles to deal with his diabetes made him consider exercise. Biking might be bearable, he thought. He liked pedaling through Cherokee country. When his son heard him say that, he bought a nice used bike for his dad, who thought he’d better raise his game if he was going to ride a bike that nice.

“My rides grew longer basically because of wonderments—what I call goals. They started as ‘I wonder if I can bike ten miles, 20 miles, 30 miles.’ Eventually I got to 100 miles,” says Gipson. Then 300, on what has become an annual ride he does through Cherokee country.

When the Oklahoma Senior Games called and urged him to sign up for a qualifier to race, competing became part of his life. And has added vitality to it. Between riding and eating better, like cutting back on fried foods, the nine medications he took for diabetes, high blood pressure, and high cholesterol became just one—and over ten years of cycling, he dropped 75 pounds.

“I’ve lasted this long in cycling because of stubbornness and enjoyment,” says Gipson. “I always want to have more behind me than in front of me, and I always want to enjoy a ride or race no matter how much I hurt.”