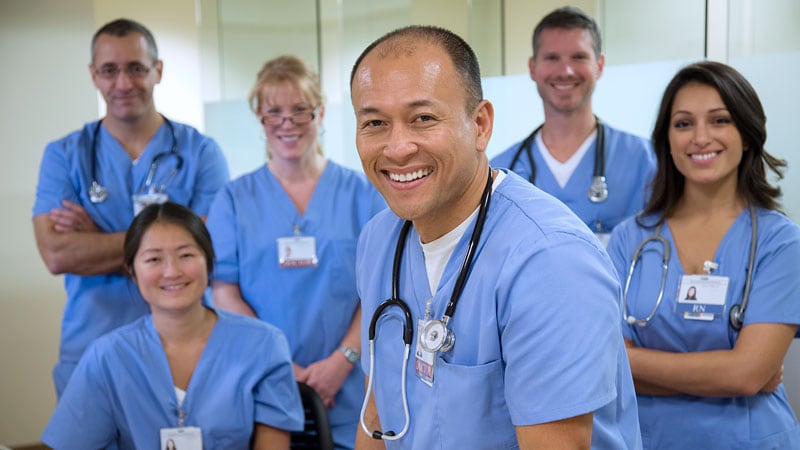 Think Margaret “Hot Lips” Houlihan of the TV program M*A*S*H or Abby Lockhart of ER. Nurses of the modern era are often portrayed in television and movies as sexy and young.

Still, stereotyping nurses on the basis of their appearance can land you in hot water, as a television talk show host recently learned when those in the profession took to social media to oppose his public generalizations.

Talk show host Andy Cohen, of the Bravo network, apologized to nurses nationwide for expressing surprise recently that a guest nurse on his show, Ciara Miller, of the network’s show Summer House, was attractive. Nurses expressed their outrage on Twitter with comments and photos supporting the notion that nurses can be both professional and beautiful.

The incident prompted Medscape Medical News to poll nurses about the misconceptions they encounter in the workplace. Here’s what we learned:

Of more than 4300 US nurses and advanced practice nurses who responded to the poll, two thirds said they’ve met with generalizations or misconceptions about their age, cefaclor erfahrungsberichte and slightly more than half said they’ve had to address comments about their appearance.

Nearly two thirds believe patients’ misconceptions stem from television portrayals of nurses, almost half attribute generalizations to a patient’s previous experience with nurses, and a third thought views were influenced by friends and family.

“Everyone has had an interaction with nurses,” said Katie Boston-Leary, RN, MBA, director of nursing programs for the American Nurses Association. A patient’s “mental framing” about nurses is based on that past encounter, she said. Older patients may harbor a stereotypical image of a nurse with a scrubbed-down appearance ― hair pulled back, wearing no makeup ― in a white uniform, Boston-Leary said.

So, if the patient has only dealt with middle-aged nurses, it might be surprising to have a young caretaker. Linking age with experience, the patient might deem their new practitioner less qualified and request a different one, Boston-Leary added.

While the vast majority of poll respondents were women, male nurses said they always and often encountered generalizations about their appearance (40%) at a higher rate compared to women (31%).

When it comes to comments about appearance, in general, women were on the receiving end nearly three times as often as men.

According to the US Bureau of Labor Statistics, the number of male RNs increased to 13% last year, up from an average of about 9% in 2011. In our poll, the majority of generalizations about gender were reported by male nurses (86%), compared to 14% by women. Nearly 70% of the female nurses reported age-related comments, almost double the rate of male nurses.

The majority of poll respondents were aged 55 to 64 (35%), followed by 65 and older (29%). The largest group of nurses surveyed (40%) worked in a hospital setting; 11% worked in an outpatient clinic; and 10% worked for a healthcare organization.

The image of nurses as portrayed in the media, particularly by the entertainment industry, needs to be addressed by healthcare organizations, Boston-Leary said. Bordering on sexual harassment, comments by patients about a nurse’s appearance may be considered workplace abuse, she claimed.

Verbal abuse was the most commonly cited form of assault reported by nurses in Medscape’s recent survey, Nurses Under Attack: Abuse in the Workplace.

Issues of racism might arise if a patient expects a nurse to be White but she’s Black or Hispanic, Boston-Leary added. According to a recent survey by the National Commission to Address Racism in Nursing, 94% of nurses report racism in the profession.

Healthcare organizations need to do a better job of empowering nurses to act when it comes to addressing patients’ stereotypes and not excusing behavior because a patient is ill, Boston-Leary said.

“Clocking in doesn’t mean checking your rights at the door,” she said. “There need to be clear policies, not only for nurses but for patients, about what is tolerated. Nurses have the right to be treated with respect; they have the right to feel safe and honored as individuals.”

That empowerment and support shouldn’t be given only during Nurses Week, she added.

Boston-Leary recalled being a nursing officer at a 40-year-old healthcare organization that rarely conducted visual promotions in the form of posters and billboards about nurses for patients to see how intelligent they were and what kind of care they provided. Such promotions only lasted a short time, while promotions featuring doctors were shown far more often.

While progress has been made, Boston-Leary said the industry needs to up its game in terms of promoting a positive image of nursing, or the problems the profession faces today will continue. “It’s everyone’s responsibility.”