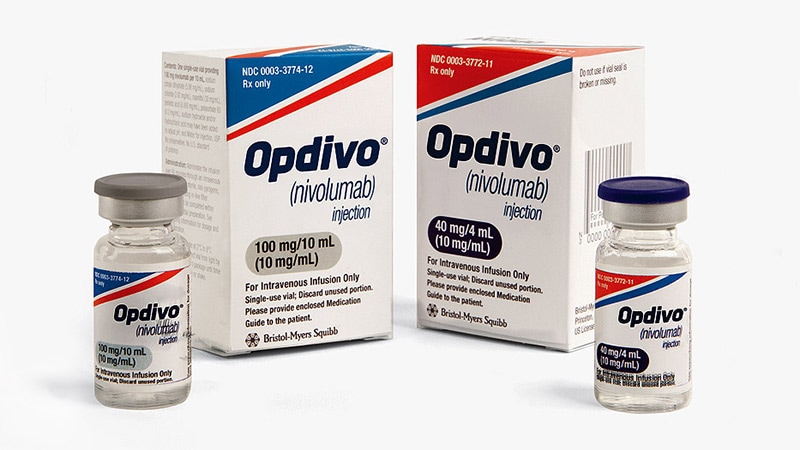 The US Food and Drug Administration has approved the adjuvant use of nivolumab (Opdivo) in patients with resected esophageal or gastroesophageal junction cancer who have received neoadjuvant chemoradiotherapy and have residual pathological disease following surgery.

The approval addresses an unmet need among these patients, who have a high risk of recurrence but for whom surveillance is the only current management option after the above-described standard treatment, according to experts.

The FDA’s approval is based on results from the CheckMate 577 study, which showed a significant improvement in disease-free survival compared with placebo.

This was described as “a practice-changing trial in the treatment of esophageal cancer” by David H. Ilson, MD, PhD, Memorial Sloan Kettering Cancer Center, New York City, in an editorial in The New England Journal of Medicine last month that accompanied the published study results.

“The trial shows the first true advance in the adjuvant therapy of esophageal cancer in recent years,” writes Ilson.

In the randomized, using alchol with aricept double-blind, phase 3 trial, patients with resected stage II or III esophageal or gastroesophageal junction cancer were randomly assigned in a 2:1 ratio to receive nivolumab (at a dose of 240 mg every 2 weeks for 16 weeks, followed by a dose of 480 mg every 4 weeks) or placebo. The maximum duration of the intervention period was 1 year.

All of these patients had received neoadjuvant chemoradiotherapy and had residual pathological disease, as noted in the new indication. Patients were enrolled regardless of programmed death ligand 1 (PD-L1) expression.

The median follow-up was 24.4 months.

There were fewer distant recurrences in the nivolumab group than in the placebo group (29% vs 39%) and fewer locoregional recurrences (12% vs 17%).

No new safety signals were observed, and 9% of the nivolumab patients discontinued the drug because of treatment-related adverse events vs 3% of placebo patients. In addition, a 1-year course of adjuvant nivolumab did not negatively impact patient-reported quality of life, the trialists reported.

Grade 3 or 4 adverse events of any cause were more frequent in the nivolumab group vs the placebo group (34% vs 32%) as were those related to the intervention (13% vs 6%).

Notably, the trial’s original co-primary endpoint was overall survival, but was dropped to a secondary endpoint after enrollment “challenges.”

When the now-published data were first presented at the 2020 annual meeting of the European Society for Medical Oncology, the invited discussant, Andrés Cervantes, MD, PhD, University of Valencia, Spain, raised several issues with the trial.

Preoperative chemoradiation is not “universally accepted” as the standard of care in this setting, said Cervantes, president-elect of ESMO.

NEJM editorialist Ilson acknowledged as much. “A debate is ongoing about whether chemotherapy alone or combined chemoradiotherapy is the preferred treatment for esophageal cancer before surgery,” he wrote.

In addition, Cervantes noted that disease-free survival is not currently validated as a major endpoint in gastroesophageal cancers, and the median follow-up was short.

Nick Mulcahy is an award-winning senior journalist for Medscape, focusing on oncology, and can be reached at  [email protected]  and on Twitter:  @MulcahyNick