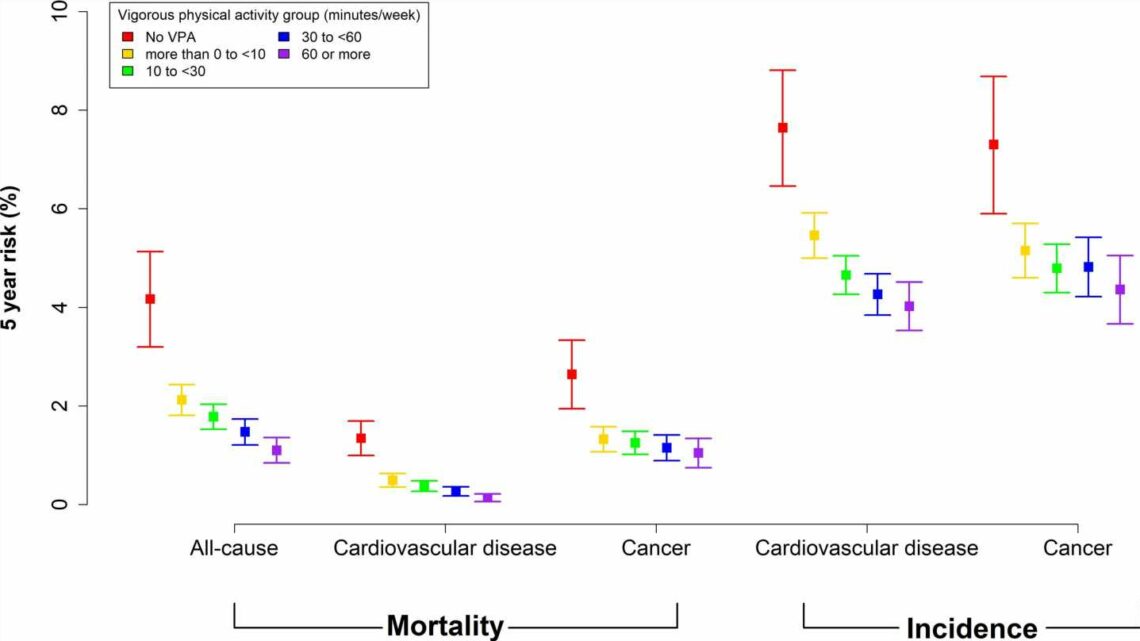 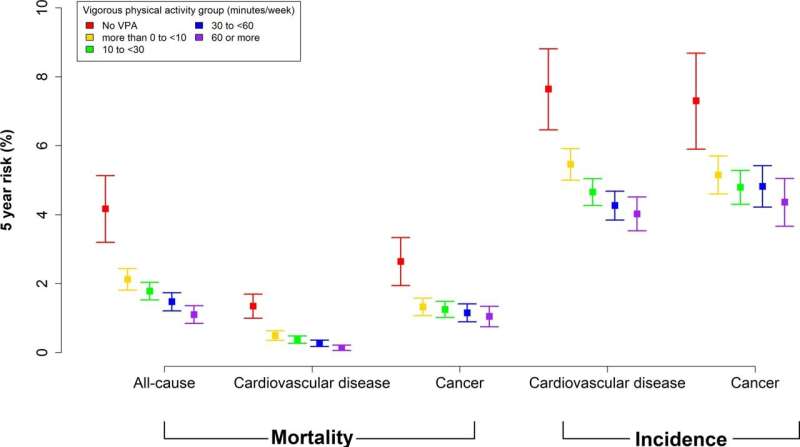 Two-minute bursts of vigorous activity totaling 15 minutes a week are associated with a reduced risk of death, according to research published today in European Heart Journal.

“The results indicate that accumulating vigorous activity in short bouts across the week can help us live longer,” said study author Dr. Matthew N. Ahmadi of the University of Sydney, Australia. “Given that lack of time is the most commonly reported barrier to regular physical activity, accruing small amounts sporadically during the day may be a particularly attractive option for busy people.”

A second study, also published today in EHJ, found that for a given amount of physical activity, increasing the intensity was associated with a reduced likelihood of cardiovascular disease. “Our study shows that it’s not just the amount of activity, but also the intensity, that is important for cardiovascular health,” said study author Dr. Paddy C. Dempsey of the University of Leicester and University of Cambridge, UK, and the Baker Heart and Diabetes Institute, Melbourne, Australia.

Both studies included adults aged 40 to 69 years from the UK Biobank. Participants wore an activity tracker on their wrist for seven consecutive days. This is an objective way to measure motion, and particularly sporadic activity of different intensities during the day.

The risk of all five adverse outcomes reduced as the volume and frequency of vigorous activity increased, with benefits seen even with small amounts. For example, participants with no vigorous activity had a 4% risk of dying within five years. Risk was halved to 2% with less than 10 minutes of weekly vigorous activity, and fell to 1% with 60 minutes or more.

The second study included 88,412 adults free of cardiovascular disease. The average age was 62 years and 58% were women. The investigators estimated the volume and intensity of physical activity, then analyzed their associations with incident cardiovascular disease (ischemic heart disease or cerebrovascular disease). Participants were followed for a median 6.8 years.