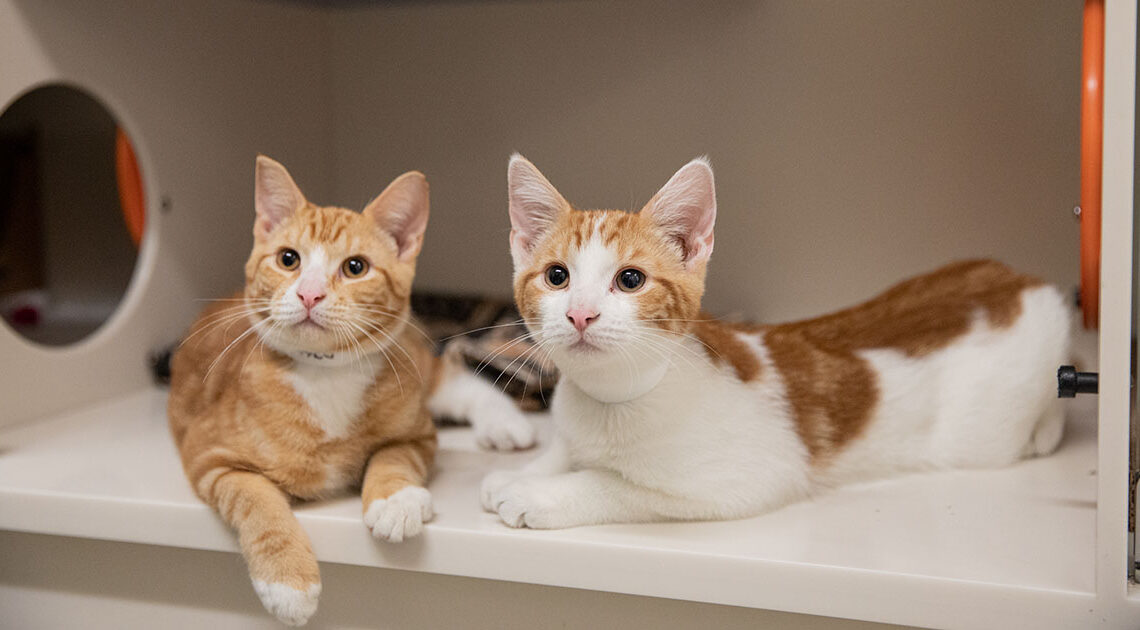 Frankie, left, and Caiden with Shiloh.

French novelist Amantine Lucile Aurore Dupin—better known by her pen name George Sand—once wrote, “There is only one happiness in life: to love and be loved.”

For Brooklyn resident Whitney M. and her two young children, that happiness came in the form of two eight-month-old orange-and-white  kitten brothers adopted from the ASPCA.

“I liked the idea of two cats,” she adds. “I wanted a match where there was a willingness on both sides—human and feline—to be buddies.”

Whitney searched several adoption sites for months before discovering the two kid-friendly cats at the ASPCA Adoption Center. She completed an online survey and was contacted by ASPCA Matchmaker Lisa Berger. The two discussed the kittens’ natures and Whitney’s expectations as a potential pet owner. 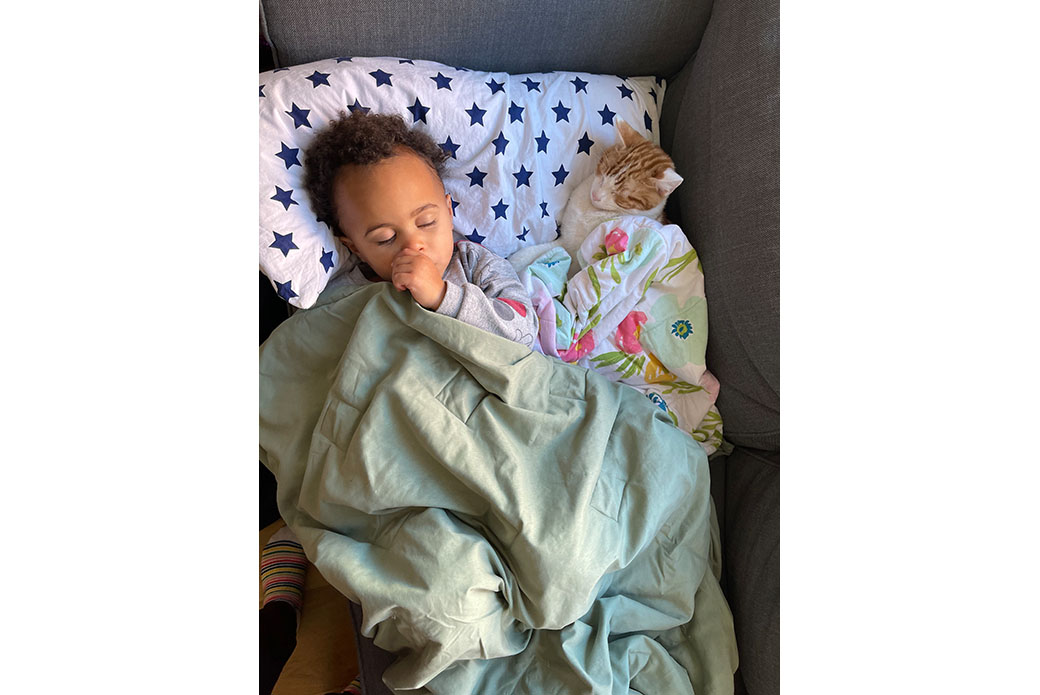 “I want my kids to learn boundaries and how to care for an animal,” says Whitney, a psychotherapist who wanted her kids to have similar experiences she had growing up with pets. “We are also home because of the pandemic, so it’s the right time to take on this responsibility.”

“Of the pairs we had available at the time, I felt like Shiloh and Reed best matched what Whitney wanted,” says Lisa. “They are young, energetic, resilient and social. I thought they’d do well with young children in a busy household.” 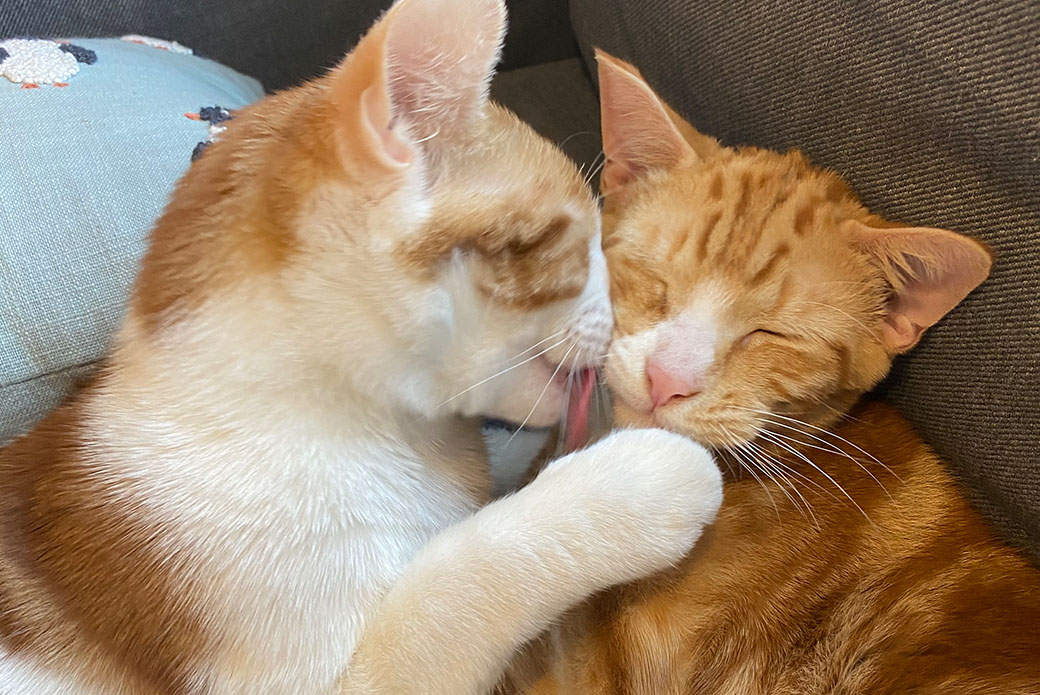 Kate Six, another Matchmaker, facilitated a virtual meet-and-greet over Zoom® between Whitney and the kittens’ foster caregiver, Allyssa, who happened to live around the corner. Whitney and her family picked up the kittens directly from Allyssa and officially adopted them on December 29.

“The whole process was easy and quick once we found our match,” Whitney says. “The transition was seamless. I knew these kittens were going to be perfect.” 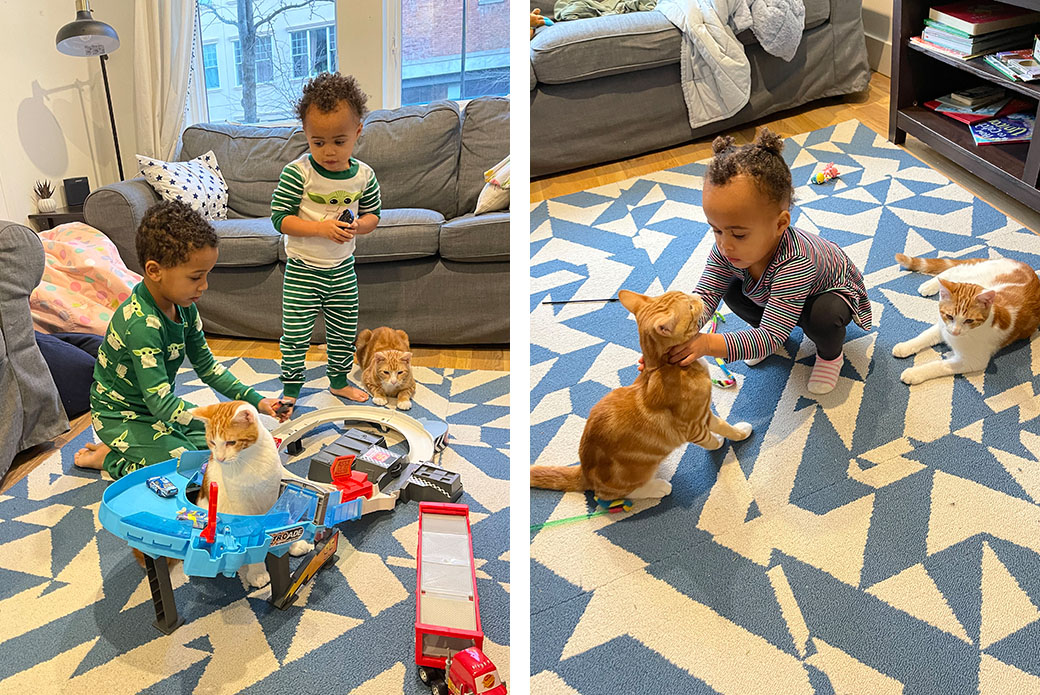 Playtime is for kids and cats alike.

Reed and Shiloh’s origins were far from perfect. Their original guardian was unable to get her family of cats spayed and neutered and they soon multiplied to 15—more than she could adequately care for.

“A concerned citizen reported her to the NYPD, who then contacted us,” says Lisa Kisiel, Community Engagement Manager of Casework, Training & Events for the ASPCA. “The FDNY had also made a visit to the home because the cats had turned on the switch to the stove.” 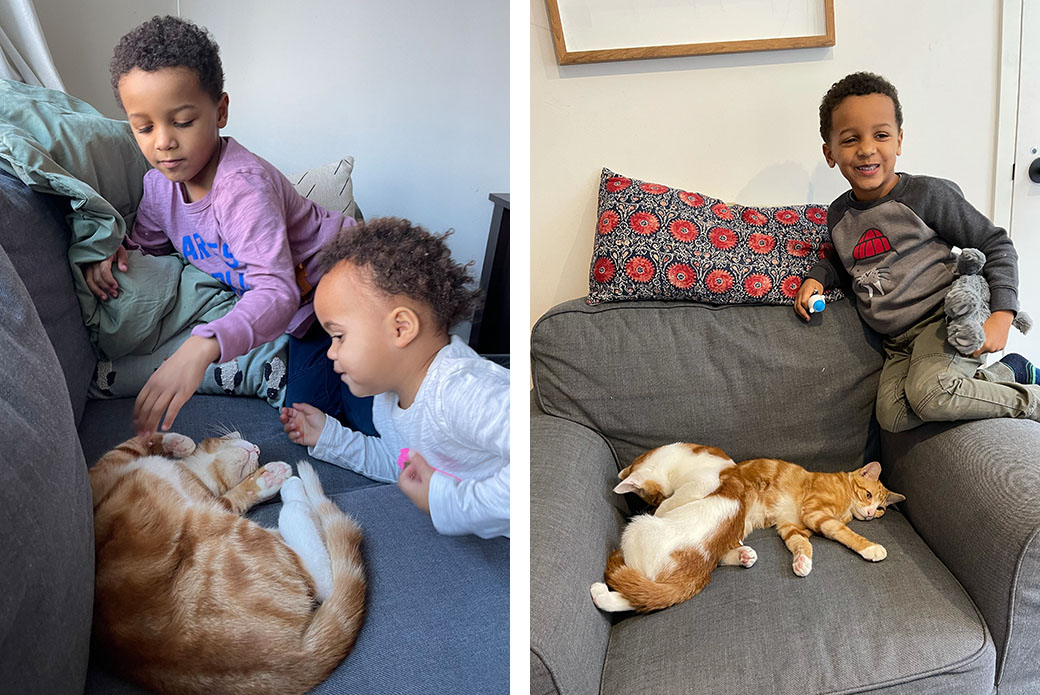 Thirteen cats, including Reed and Shiloh, were removed from the home on November 23 by Lisa and her co-worker, Mohamed “Mo” Khaled, a Community Engagement Caseworker.

“She had a very difficult time parting with the cats but knew it was for the best,” says Lisa. Lisa and Mo then made arrangements for the guardian’s two remaining cats to be spayed and neutered. 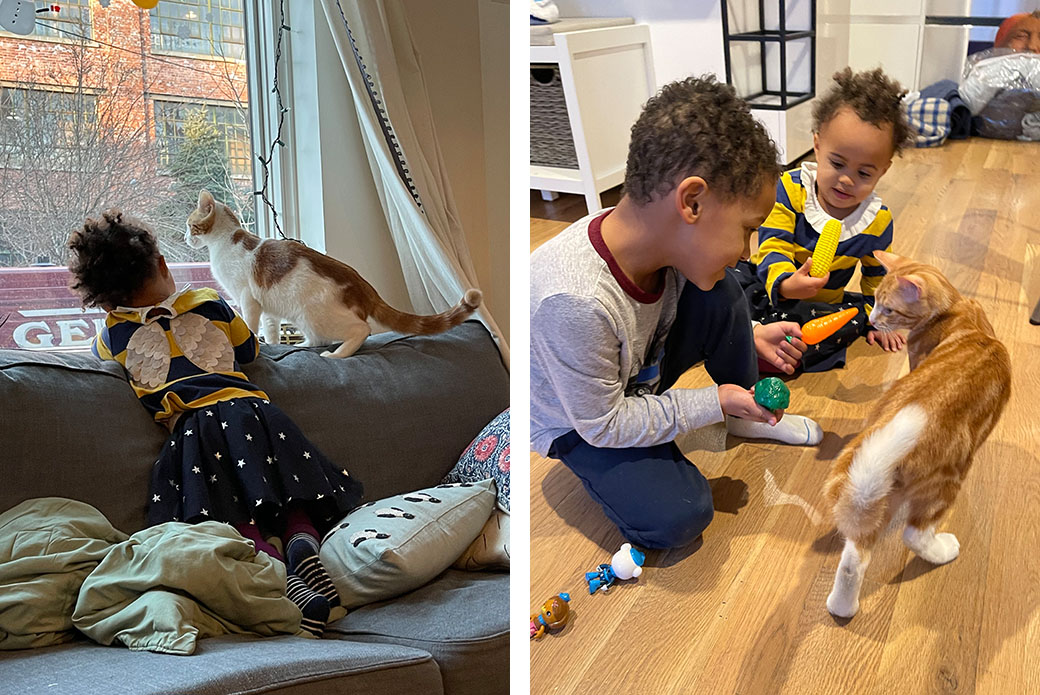 Left: Frankie and Kwazii. Right: The siblings and Shiloh.

At the ASPCA, Reed and Shiloh were briefly hospitalized for diarrhea and vomiting, but quickly recovered. Reed has a corneal scar in his left eye—likely from a previous eye infection that went untreated—but can still see and plays like a normal cat.

Loving and Being Loved

Since their adoption, Reed was renamed Kwazii, since the children already have an uncle named Reed. 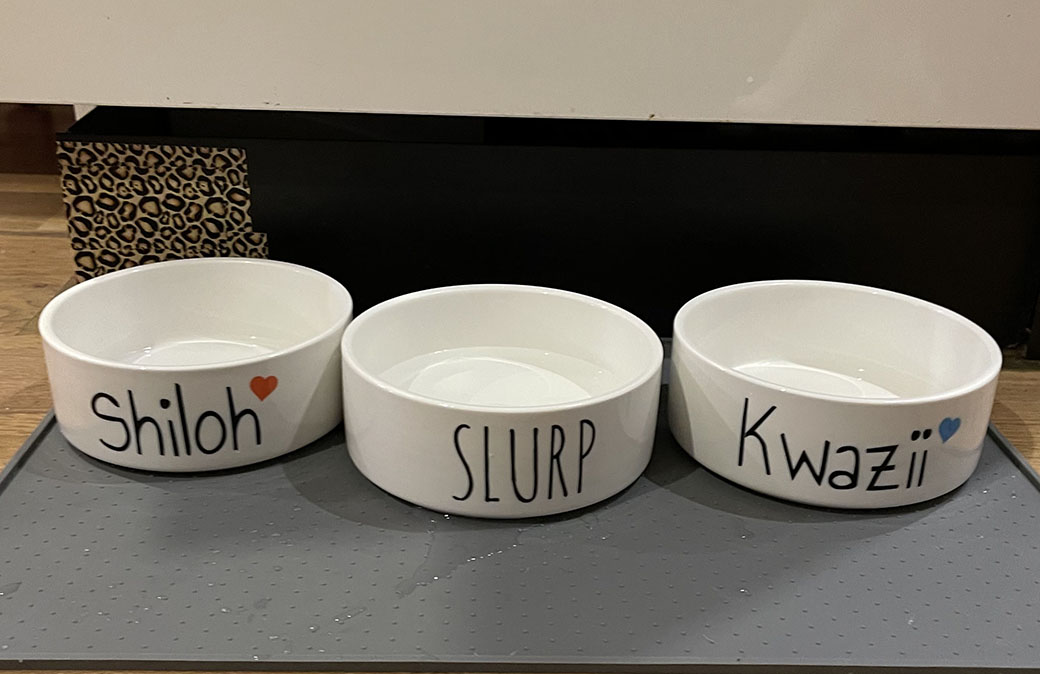 Whitney noticed each cat displaying food insecurities, which is not uncommon in animals who come from overcrowded homes where resources can be scant.

“Kwazii is not a pirate like the character he’s named after,” explains Caiden. “But sometimes he tries to eat our human food off the table.” 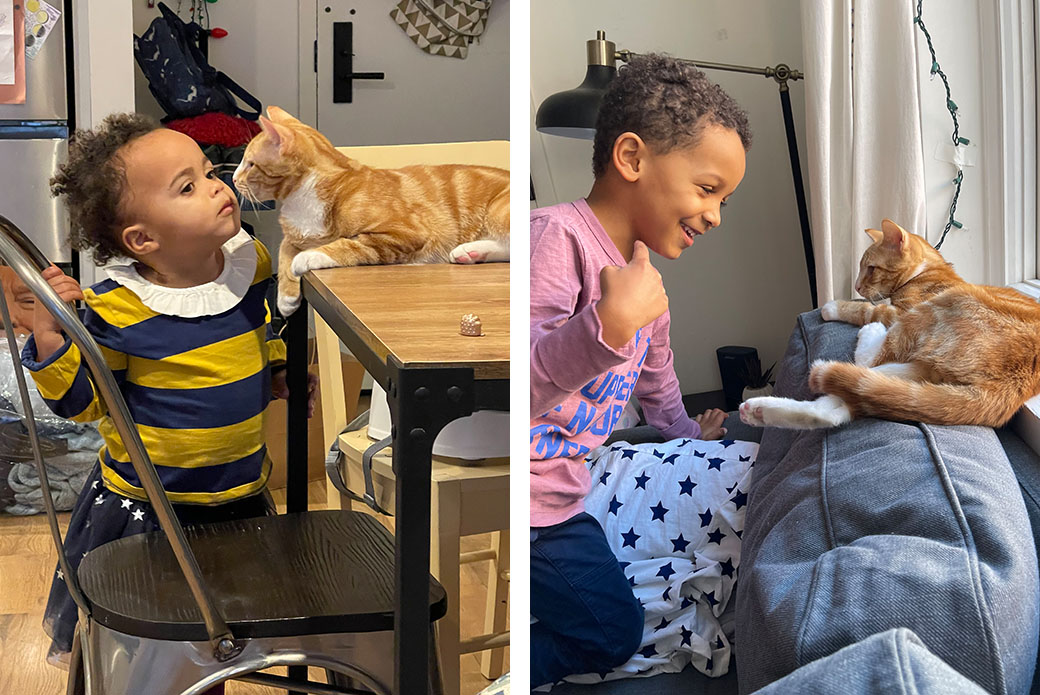 Both kids acclimated to the cats right away, although Caiden takes to Shiloh and Frankie to Kwazii.

“They all feel connected,” says Whitney. “The cats want to be with the kids and in the mix all the time. Brotherly love, sibling love—they’re down for anything.”

“I love them, and they are my best friends,” says Caiden.

Caiden and his cats.

If Shiloh and Kwazii could talk, they’d probably share the same expressions of love and joy.