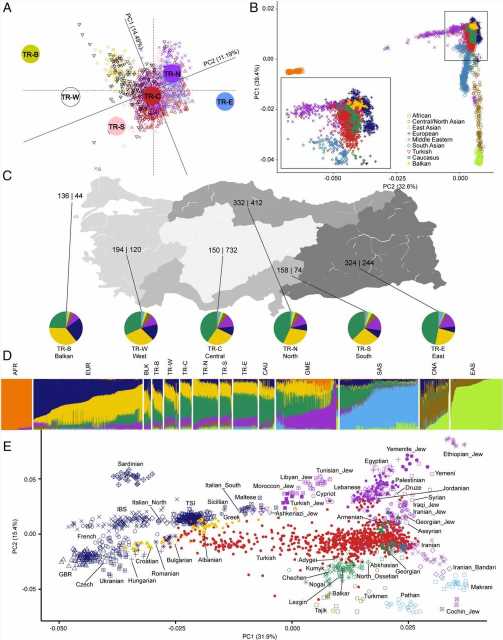 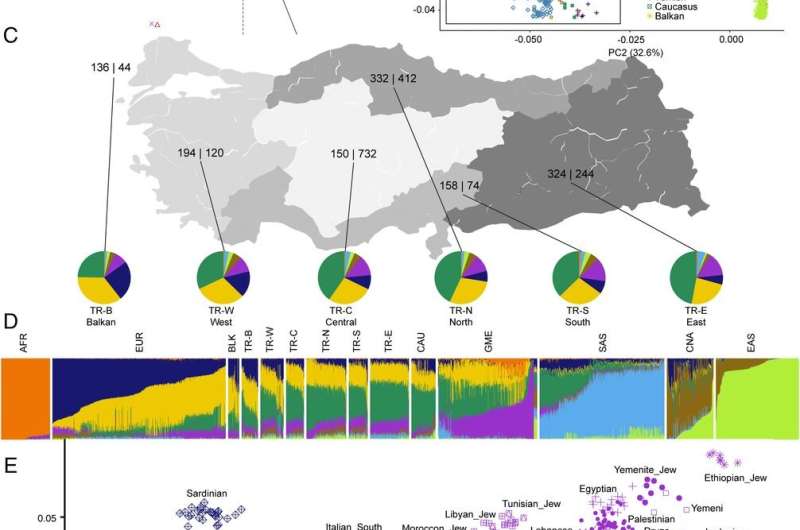 An international team of researchers has conducted a genomic analysis of the Turkish population and found a high degree of variation and admixture. In their paper published in Proceedings of the National Academy of Sciences, the group describes obtaining tissue samples from thousands of people living in regions of Anatolia (a peninsula that includes most of Turkey) and what they found when they sequenced and analyzed their exomes.

Throughout human history, many major migrations have involved traveling through what is now modern Turkey. Because of that, it is believed that many of the people who live there today likely have ancestors from many places in the region. In more recent times, the practice of consanguineous marriage (marriage between people who are closely related) has become common in Turkey, which suggests the possibility of deleterious (harmful) genetic variants arising. In this new effort, the researchers began by noting that despite its rich history, very few genetic studies have been conducted regarding the people of Turkey. To remedy that, the team embarked on a genomic analysis of the Turkish population.

Researchers obtained tissue samples from 3,362 Turkish individuals who were not believed to be related and who lived in different geographic areas. They then sequenced the samples and then analyzed the results looking for both trends and variants.

The researchers found that the people of Turkey have close genetic ties to the people in the Caucasus, the Balkans, Europe and the Middle East. And they also found a very large number of variants—some shared with people from other regions and some unique to people living in Turkey. More specifically, they found 10 million variants, 37,123 of which they deemed to be deleterious. They also found that 21% of the variants were unique to people living in Turkey, and of those, 38% had not been seen before. The researchers also found examples of the Greater Middle Eastern Variome, though they note they do not represent the Turkish people as a whole.