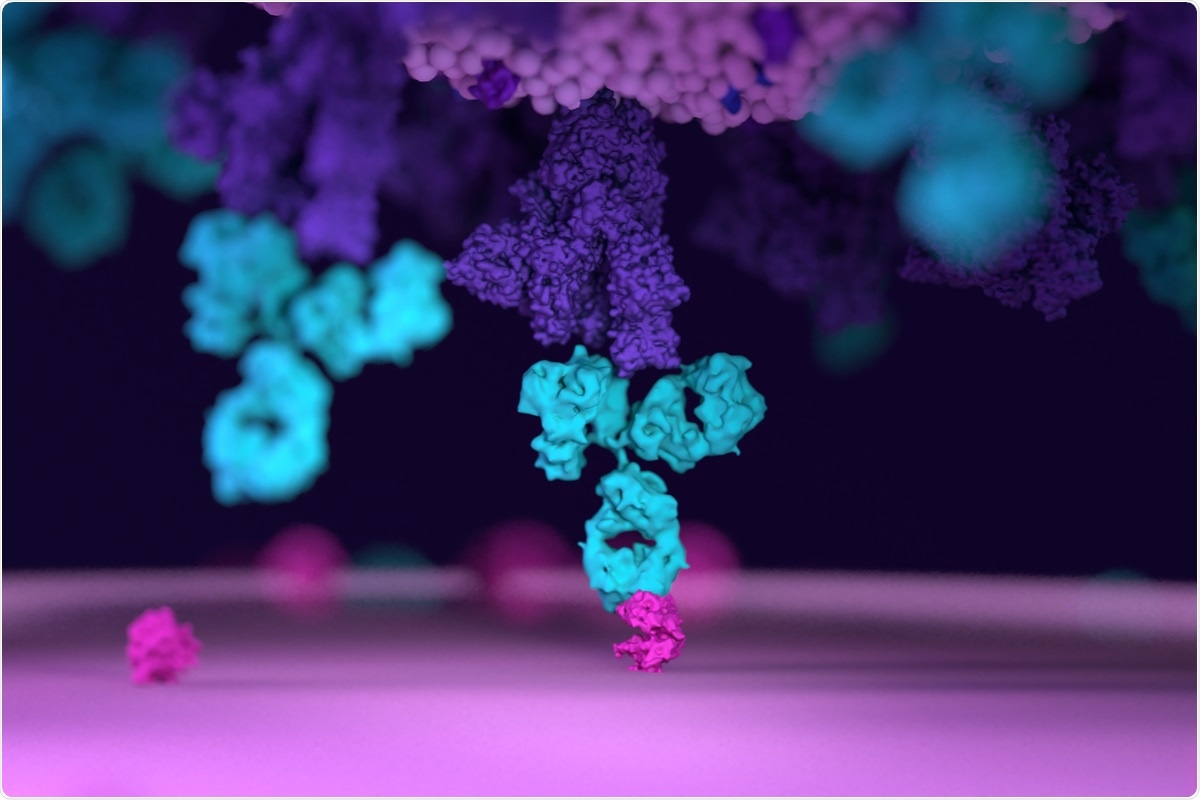 A preprint version of the study is available on the bioRxiv* server, while the article undergoes peer review

Since the emergence of SARS-CoV-2, the causative pathogen of coronavirus disease 2019 (COVID-19), significant efforts have been put forward to repurpose pre-existing antiviral medicines as well as discover novel therapeutic monoclonal antibodies against SARS-CoV-2.

Regarding antibody repurposing, studies have shown that monoclonal antibodies isolated from individuals infected with SARS-CoV or Middle East respiratory syndrome coronavirus (MERS-CoV) fail to effectively neutralize SARS-CoV-2. Such a lower level of cross-neutralization could be due to the reduced binding affinity of pre-existing antibodies for novel epitopes found in SARS-CoV-2.

In the current study, the scientists have explored a hybrid “refocusing” approach, which combines the conventional discovery and repurposing strategies, to engineer a pre-existing neutralizing antibody to target a related but resistant virus.

For repurposing, clonazepam boots the scientists selected an anti-SARS-CoV monoclonal neutralizing antibody. Namely CR3022, which was isolated in 2006 from a convalescent donor.

Previous studies analyzing the crystal structure of CR3022 have shown that the antibody binds to an epitope in the periphery of the angiotensin-converting enzyme 2 (ACE2) binding site, which is highly conserved between SARS-CoV and SARS-CoV-2. There are only 4 amino acid differences located in or around the epitope. Of 4 mutations, reversion of one (P384A) has been found to reduce the binding affinity of CR3022 for SARS-CoV-2 by 100-fold.

Given these observations, the scientists have engineered CR3022 to increase its binding affinity for the corresponding epitope on SARS-CoV-2. Moreover, they have tested how efficiently the engineered antibody can neutralize SARS-CoV-2 and prevent infection.

Using a rapid antibody affinity maturation strategy, the scientists engineered CR3022 variants with high affinity for SARS-CoV-2 spike protein. By introducing single mutations within the complementarity-determining regions in the antibody, they created a panel of CR3320 variants, which were subsequently displayed as molecular Fab on the yeast surface and screened to identify the clones with increased epitope binding affinity.

The scientists conducted a crystal structural analysis of the complexes of parental CR3022 or an engineered CR3022 with SARS-CoV-2 RBD. The analysis revealed that both parental and engineered antibodies bind to the same epitope on the SARS-CoV-2 RBD.

Compared to CR3022, the binding of engineered antibodies to SARS-CoV-2 RBD resulted in the displacement of two RBD regions. The amino acid residues in these regions (Y369, F377, and P384) formed a hydrophobic pocket that interacted with the antibodies. With further analysis, the scientists revealed that a substitute paratope residue targeting the P384 residue in the epitope could significantly improve the epitope binding affinity of the antibody.

Based on the virus-neutralizing efficiencies, the scientists selected CR3022.7 as the candidate engineered antibody for further evaluation. For in vivo experiments, they intraperitoneally injected six hamsters with different concentrations of the engineered antibody. In addition, they injected a separate subset of hamsters with a fixed dose of parental CR3022. All experimental animals were subsequently infected with SARS-CoV-2 via the intranasal route.

The hamsters receiving the highest dose of engineered antibody showed either no weight loss or 3% weight loss seven days post-infection. In contrast, the administration of parental CR3022 resulted in 11% weight loss in hamsters.

Regarding SARS-CoV-2 infection, a significantly lower lung viral load was observed in hamsters that received engineered antibodies compared to those treated with parental CR3022. By measuring the serum antibody concentrations at the time of injection and at the end of experiments, the scientists confirmed that the observed effects were not due to the different pharmacokinetic properties of the two antibodies.

The study describes the development of a potent anti-SARS-CoV-2 neutralizing antibody via the engineering of a pre-existing anti-SARS-CoV monoclonal antibody. The engineered antibody is capable of preventing SARS-CoV-2 infection in hamsters without causing any adverse events.