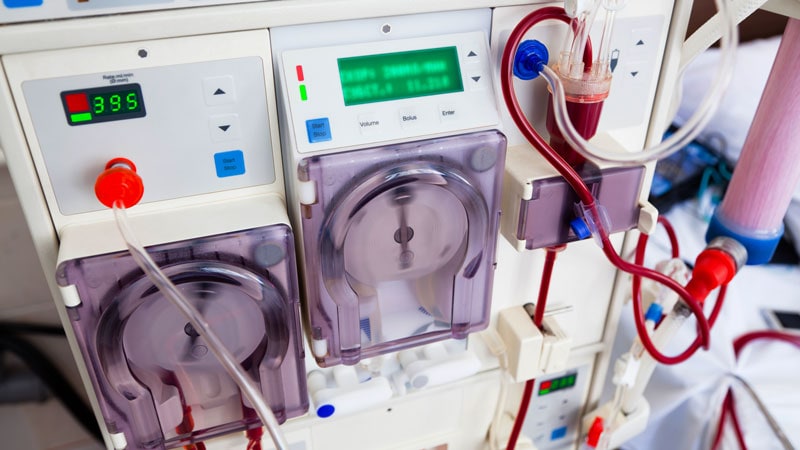 Women who are pregnant while on dialysis have significantly worse outcomes compared with women who a) have already received a kidney transplant, or
b) will eventually start dialysis but had not yet reached that point by the time of their pregnancy, according to data from more than 1.6 million women from Australia and New Zealand.

The new review shows that women on dialysis during pregnancy had the highest rates of preexisting hypertension (42%), cesarean sections (75%), preterm births (about 85%), babies born at less than 2500 g (5.5 lb; low birthweight) at delivery (about 77%), neonatal ICU admissions (67%), and neonatal death (11%), and the lowest rate of live births (94.6%) compared with women who were pregnant in three comparator groups.

The findings “confirm that pregnancy outcomes are worst in women on dialysis [out of these groups],” said Erandi Hewawasam, PhD, during the World Congress of Nephrology 2021.

These results “provide a framework for pregnancy counseling. Parenthood planning is a critical part of kidney care,” said Hewawasam, a researcher with the Australia and New Zealand Dialysis and Transplant Registry (ANZDATA), a service that is run by the South Australia Health and Medical Research Institute in Adelaide.

The pregnancy and neonatal outcomes of women who received the alternative form of RRT, kidney transplant, were better and roughly similar to the outcomes of pregnant women who would eventually require RRT.

And the pregnancy and neonatal outcomes for women in all three of these groups were worse than women who never needed RRT— the vast majority, more than 99%, of all 1.6 million women in the review.

Pregnancies in Women With Kidney Disease are High Risk

“Counseling and awareness are most important regarding pregnancy in women with kidney disease since it is a high-risk pregnancy and associated with adverse fetal and maternal outcomes, including a higher risk of cesarean sections, stillbirths, and neonatal mortality.” commented Silvi Shah, MD, a nephrologist at the University of Cincinnati College of Medicine, Cincinnati, Ohio, who specializes in women’s health in kidney disease.

“Women should be counseled about this and should be followed in a tertiary center by a multidisciplinary team that includes a maternal-fetal medicine specialist and a neonatologist,” Shah added.

Hewawasam and her associates took data from 1.6 million women who were pregnant and included in prenatal and birth registries for four Australian states between 1991-2013 and merged it with figures from ANZDATA.

This identified 761 mothers from the dataset who delivered their babies before starting RRT, 137 who became pregnant after receiving a kidney transplant, and 31 who were pregnant while on dialysis. The most common cause of renal disease was glomerulonephritis.

These results expand on a prior report from ANZDATA in 2013 that included records on 49 pregnancies among women on dialysis between 1966-2008. That study reported a 79% live birth rate among these women on dialysis, suggesting progress in avoiding stillbirths has occurred in subsequent years.

A 2019 report documented the risks from pregnancy in 664 women on hemodialysis and registered in the US Renal Data System from 2002-2015.

These women had a 41% rate of preterm birth and a 39% rate of having a cesarean delivery. The dataset also included 670 women who became pregnant after receiving a kidney transplant, and in contrast to the ANZDATA these women had 18% more cesarean deliveries relative to the women on hemodialysis. This study did not report on neonatal outcomes.

Hewawasam and Shah have disclosed no relevant financial relationships.