A total of 28 companies, including most major EV automakers, have come together to form the Zero Emission Transportation Association (ZETA), with the goal of promoting policies that push for EV adoption, with goal of EVs accounting for 100% of new vehicle sales in various segments by the year 2030. The formation of ZETA comes just days after reports surfaced of U.K. government plans to phase out the sales of new gas- and diesel-engined vehicles by the year 2030, amid similar plans by the state of California aiming for the year 2035.

The founding members of ZETA include EV makers and start-ups like Tesla, Rivian, Lucid, Arrival, and Lordstown, as well as charging station providers like EVgo, EVBox, Volta, and ChargePoint. The consortium also includes energy companies like ConEdison, PG&E, Duke Energy, as well as industrial giants like Siemens. Uber is also on board.

ZETA’s agenda will focus on a number of concrete goals, starting with promoting point-of-sale consumer incentives for sales of new EVs, as opposed to tax discounts that have to be applied for at a later time frame, and also providing incentives for owners to retire their gas- or diesel-engined cars earlier and switch to battery-electric models. The coalition also plans to support plans to adopt more stringent emissions targets for current vehicles, with the goal of accelerating EV adoption in various markets. ZETA will also support the domestic U.S. electric-car industry, in order to maintain a competitive position compared to other EV-heavy markets, including lobbying for EV infrastructure investment. The coalition also plans to call for federal support when it comes to electric research and development, both when it comes to government investment and leadership on a national level.

“For the first time in a generation, transportation is the leading emitter of U.S. carbon emissions. By embracing EVs, federal policymakers can help drive innovation, create hundreds of thousands of new jobs and improve air quality and public health,” said Joe Britton, Executive Director of the organization. “ZETA’s formation recognizes a pivotal moment for national leadership and reflects the will of the growing clean transportation sector.”

The group’s target of 2030 for full EV adoption is certain to cause big splash, but there are some very obvious hurdles that this goal will face.

For starters, car and truck sales in the U.S. have amounted to about 17 million vehicles per year, with EVs accounting to between 2% and 3% of that total. That’s a big gap to bridge by 2030, and it will require more than just automakers making the decision to produce only EVs. With current battery technology, are there even enough raw materials that can be extracted each year to support sales of 17 million EVs per year in the U.S. alone, not taking the demand from other countries, some of which boast much higher percentages of EV sales at the moment into account? EV infrastructure in the U.S. has also not been keeping pace with China, where the city of Beijing alone has more EV chargers at the moment than all of the U.S. The U.S. still has a long way to go before EV charging stations are as commonplace as gas stations. 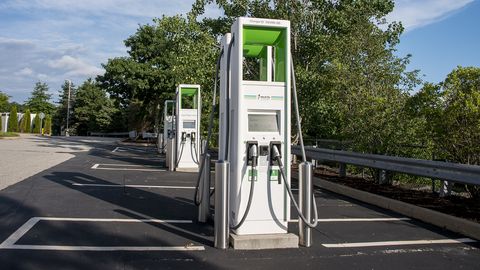 Yet another hurdle of the 2030 goal is technological, even if all other problems like infrastructure and manufacturing are resolved. It is likely that solid state battery technology will have to arrive on an industrial scale very soon, both to make batteries lighter and more environmentally friendly to produce. Battery production itself by automakers and suppliers will likely need to increase more than tenfold to support a market of 17 million cars and trucks a year just in the U.S., amid current signs of strain by suppliers.

In essence, nothing short of a revolution in battery technology and manufacturing is needed for all new cars and trucks to be battery-electric by 2030.

Will the U.S. be able to achieve this specific goal by that year?

Let’s just say that we’re more optimistic about some narrow vehicle segments more than others. Luxury sedans priced $80,000 and higher appear to be on their way to this goal already, simply because there aren’t that many players in this segment and a number of them are about to be available in battery-electric form. At the other end of the spectrum we have large pickup trucks that, despite an incoming wave of players like Rivian, Nikola, Tesla, and Hummer, face an uphill battle when it comes to converting buyers of working trucks in between the two coasts. It’s one thing for GM to offer a $100,000 Hummer to deep-pocketed early adopters, and quite another for GM to sell a Chevy dually pickup that will be used to tow horse trailers in Montana. We’re not saying that the latter won’t happen, but it will just take a few large leaps in battery technology and pricing, as well as time, for all truck owners to go EV.

And lest we forget, a number of automakers still haven’t given up their hydrogen dreams, and quite to the contrary, are pouring more money into it.

ZETA itself is aware of all of these challenges.

“The next decade will be critical in implementing federal policies that accelerate the transition to zero emissions vehicles and help address these problems head-on,” Britton added. “The clean vehicle sector already boasts hundreds of thousands of jobs but, if we encourage its growth, the United States can decisively win the global race to develop a new clean transportation economy and employ hundreds of thousands of Americans right here at home.”

Related posts:
Tesla Model 3 Crash Hurls Burning Battery Cells Into Nearby House, Starts Fire
Stephan Winkelmann Is Back to Run Lamborghini as Well as Bugatti
Best News
Mercedes-Benz SL600 (R230) | The Brave Pill
01/16/2021
FBI: No crime committed as ‘noose’ rope was there in 2019
06/23/2020
Why VW Pulled The Plug On A 400bhp VR6 Arteon R
06/23/2020
2021 Kia Grand Carnival breaks cover – solid looker! – paultan.org
06/24/2020
New Volkswagen Arteon Shooting Brake arrives as part of facelifted line-up
06/24/2020
Recent Posts
This website uses cookies to improve your user experience and to provide you with advertisements that are relevant to your interests. By continuing to browse the site you are agreeing to our use of cookies.Ok