Why You Need a Fire Extinguisher in Your Car and Garage

Working with cars and motorcycles is inherently dangerous. Not only do you need to know your stuff, but you need to be able to handle situations when things go wrong. Apparently, that’s a running theme in The Drive’s garages, as evidenced by Klein’s quote. 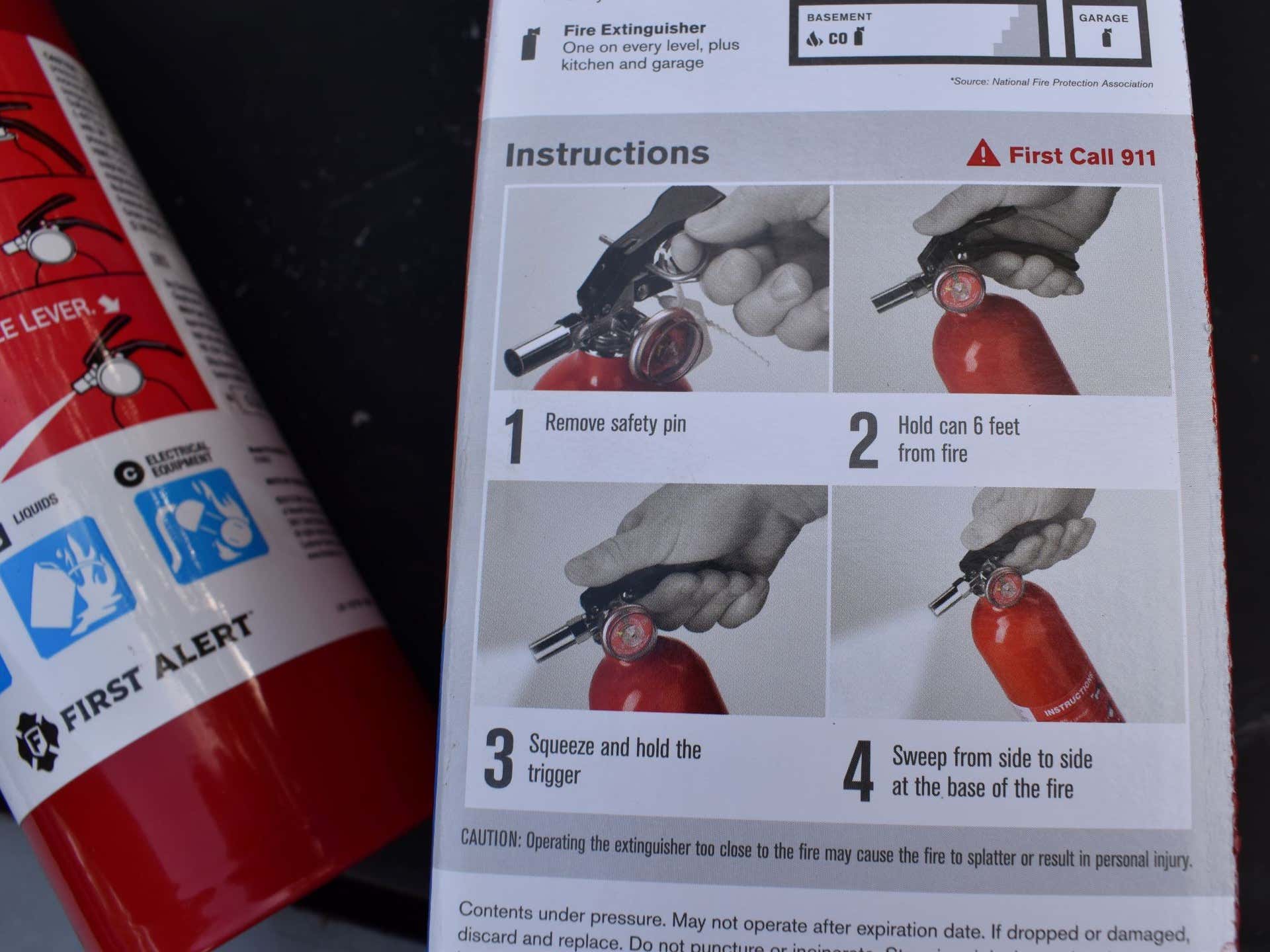 The Drive and its partners may earn a commission if you purchase a product through one of our links. Read more.

Throughout your wrenching career, you’ll run into plenty of situations that are discouraging enough to send most folks running to find a different way to waste their money. Those situations can be due to crappy parts or accidents, or they can happen when you neglect to do things the right way. I ran into such a problem Fourth of July weekend when sparklers and snakes weren’t the only fireworks my 1969 Dodge Charger project car had in store for me.

As you can imagine, a small engine fire is a real source of excitement. Thankfully, I put the fire out before more than just a couple of wires and hoses met their end. If I had been without access to a water hose, it would have been game over for my baby.

While conferring with the head honcho about tales of our screwups, the importance of fire extinguishers, both in the garage and in your car, came up. We hope you never run into a situation where you’ll need it, but without one, chances are high that an accident can reduce your ride by one. 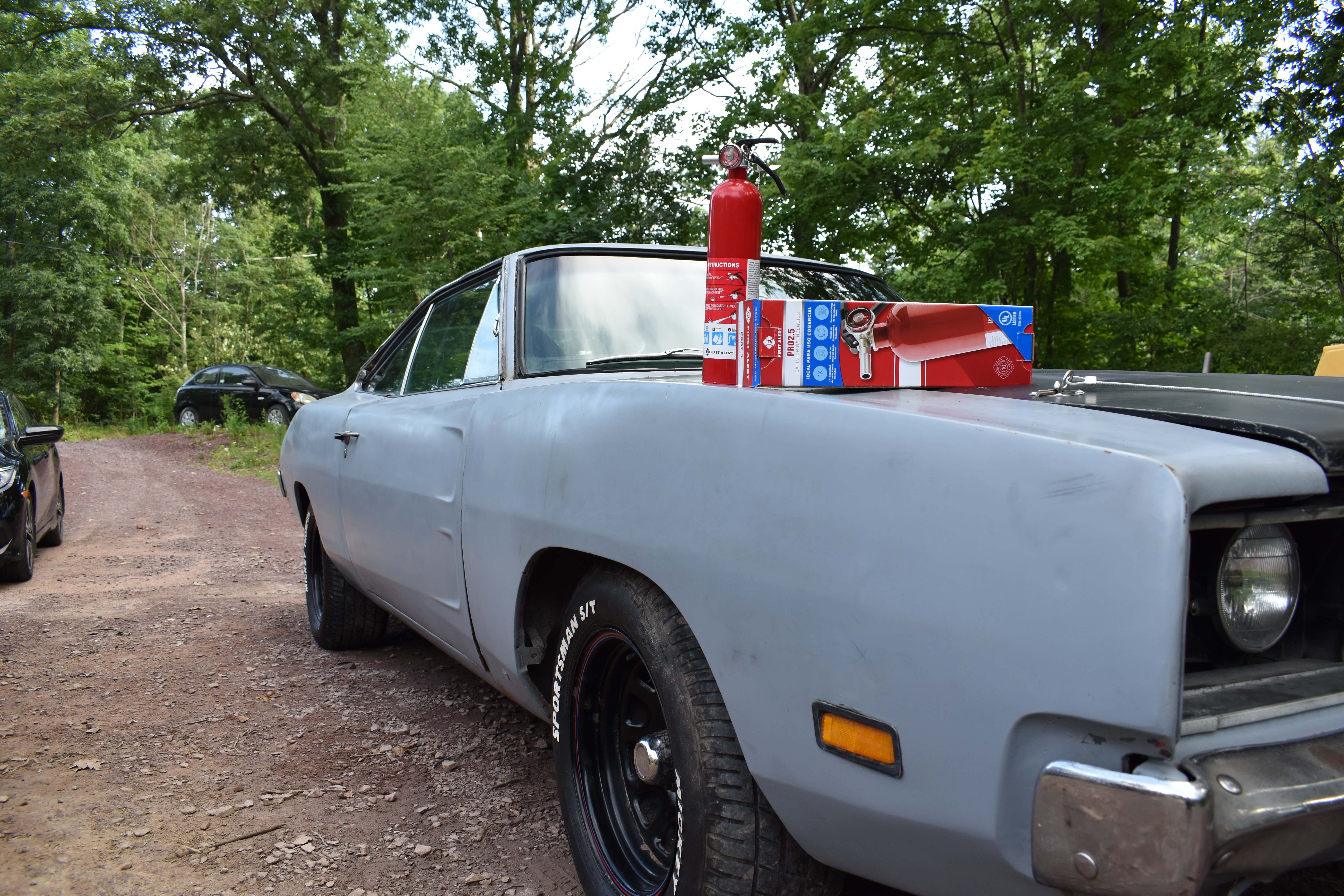 The Charger not on fire.

Accident or the Result of Ignorance?

I won’t say that my particular incident is on account of faulty parts or anything out of my control. I don’t exactly know what took place, but I know that I do all of the work on my car. Along the way, I missed a detail or cut a corner somewhere that led to the fire.

There were some signs leading up to the situation that something wasn’t quite right. I recently installed a Holley red pump on my car. Knowing it is internally regulated and supposedly set for what the Holley double pumper calls for, I didn’t add a fuel pressure regulator, nor did I mess around with my pump’s internal-regulator settings. That was my first bad move.

My second mistake was finding sunken floats on both the front and rear fuel bowls in the carburetor. I tore down the carb to find some debris inside that I assumed contributed to the problem, and I replaced all of my fuel lines and filters and then cleaned the carburetor. I assumed that I was good to go and didn’t bother questioning if my fuel-pressure settings needed checking or if my floats needed replacing.

The next bad move was my reaction to smelling gas. Rather than immediately shutting down the car, I casually thought to myself, “Well, that’s odd.” Within the time it took my feeble mind to process that thought, the engine backfired, and the fuel did what it does best: It started to burn.

My biggest mistake, and the reason for this article, was my lack of a fire extinguisher. What makes this so bad is that this isn’t my first engine fire. I’m not saying that I catch fire a lot, but I have been in a similar situation twice. I even used to keep an extinguisher in this car because of it. After years without a fire, however, I never replaced the old one after using it for an unrelated situation.

Thankfully, I was close enough to a garden hose to snuff out the flames before any real damage could be done. Had I been anywhere other than my driveway, the fire might have grown out of control and damaged property, put someone in danger, or worse yet, burned the Charger to the ground. Why? All because I don’t have a fire extinguisher in the car, and that’s unacceptable.

While I am paying for my ignorance, I’m thankful things happened as they did. I’m now using this as an opportunity, not only because I’m going through the Charger’s engine bay with a fine-tooth comb to hopefully prevent it from happening again, but because it’s a learning moment to never take safety for granted. That’s why I am also throwing a fire extinguisher in my car — permanently.

So, why does my mistake mean you need a fire extinguisher? Well, it serves as an example of how things can go wrong if you rush through a project, miss a detail, or have a bad day. Accidents happen. Wild weather occurs. Things can go sideways quickly, and wouldn’t you choose to be prepared?

Why Isn’t Water an Option?

In this case, my garden hose got the job done, however, my fire was relatively minor. Still, using water to put out a car fire can be dangerous. While water works well for wood and paper fires, it can make things worse when it comes to electrical or flammable-liquid fires.

In the case of flammable fluids, water can make the problem worse by spreading the gas, oil, or other liquid and, therefore, the fire. Luckily, my situation was minor enough that this wasn’t an issue, but it can happen. If it does, you run the risk of doing more harm than good.

Water also conducts electricity, so if you’re dealing with an electrical fire, the water might pool around your feet, and there’s a chance that you can be electrocuted. And in the case of an electrical-vehicle fire, water isn’t going to stop a thermal runaway, which is a dangerous chemical chain reaction that can occur within the batteries. 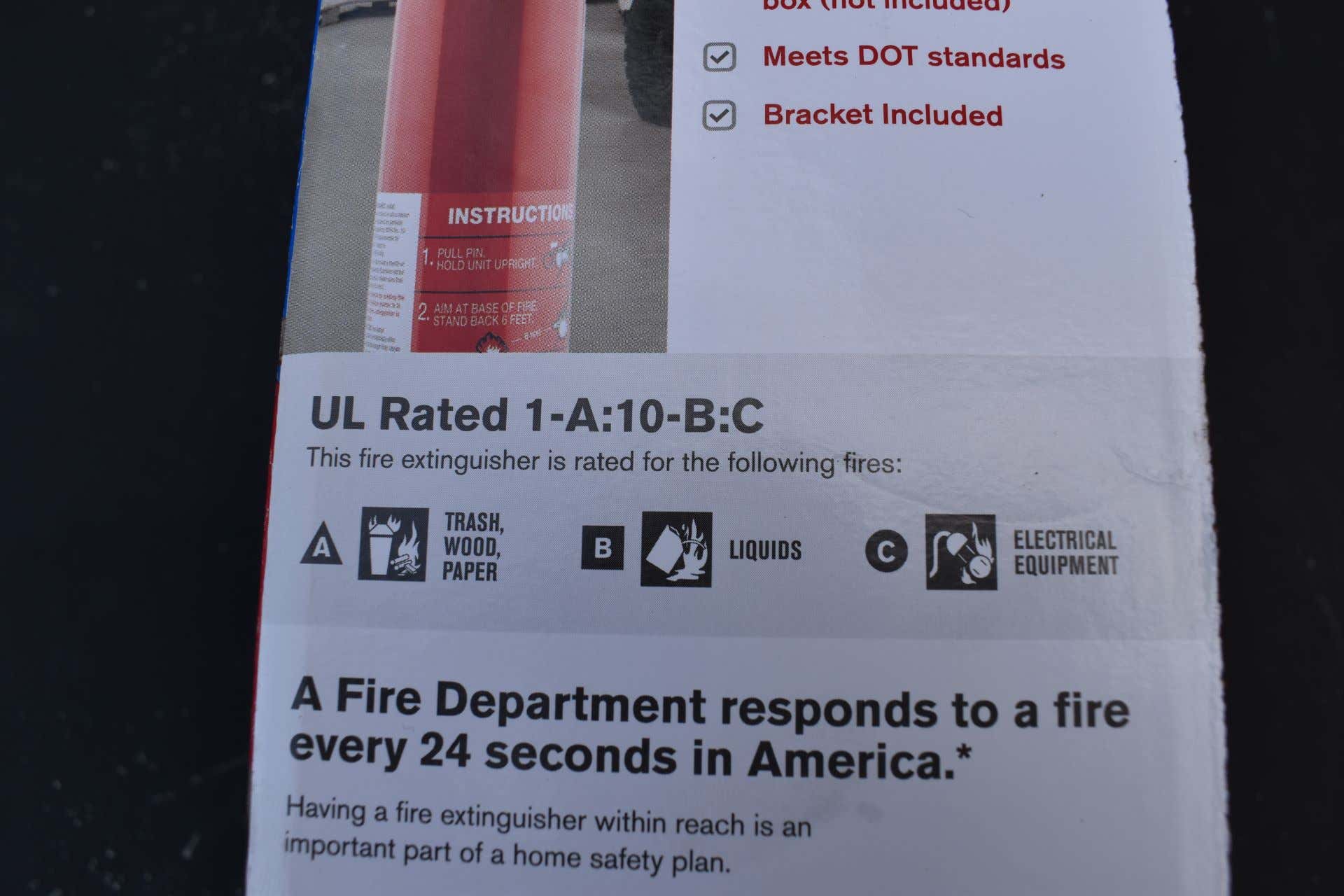 You want to make sure whatever fire extinguisher you pick up for your car/garage is rated to handle flammable liquid and electrical fires.

What Kind of Fire Extinguisher Do I Need?

Thankfully, picking up a fire extinguisher to keep in your car is extremely easy. You can probably run down to your local parts store and pick up whatever is on the shelf, and you’ll be good to go. There’s a good chance that whatever they have in stock is rated to deal with electrical and flammable-liquid fires.

Still, you should know a little bit about what you’re looking at. I personally picked up the First Alert Pro 2.5 Dry Chemical Fire Extinguisher to keep in my car, which has a UL rating of 1A:10B:C. While it’s only a 2.5-pound fire extinguisher, I think it’s just fine for this car. Don’t sweat it if you want to pick up a fire extinguisher and this isn’t available. It’s the UL rating that’s important.

The letters in the UL rating tell us what kind of fires the extinguisher is good for. A is good for paper and wood fires, B is good for flammable-liquid fires, and C means it’s good for electrical fires. Considering all three could happen in your vehicle, you want to find an extinguisher that can handle all three scenarios.

The numbers in the UL rating tell us how big of a fire we can extinguish. Fires rated 1A and 10B aren’t the largest, but this rating should work well for your car.

Having too much extinguisher is better than not having enough. If you want to go bigger, there’s no harm in that. Just keep in mind that you should have the extinguisher inspected and recharged after each use, so going too big might just be a waste. 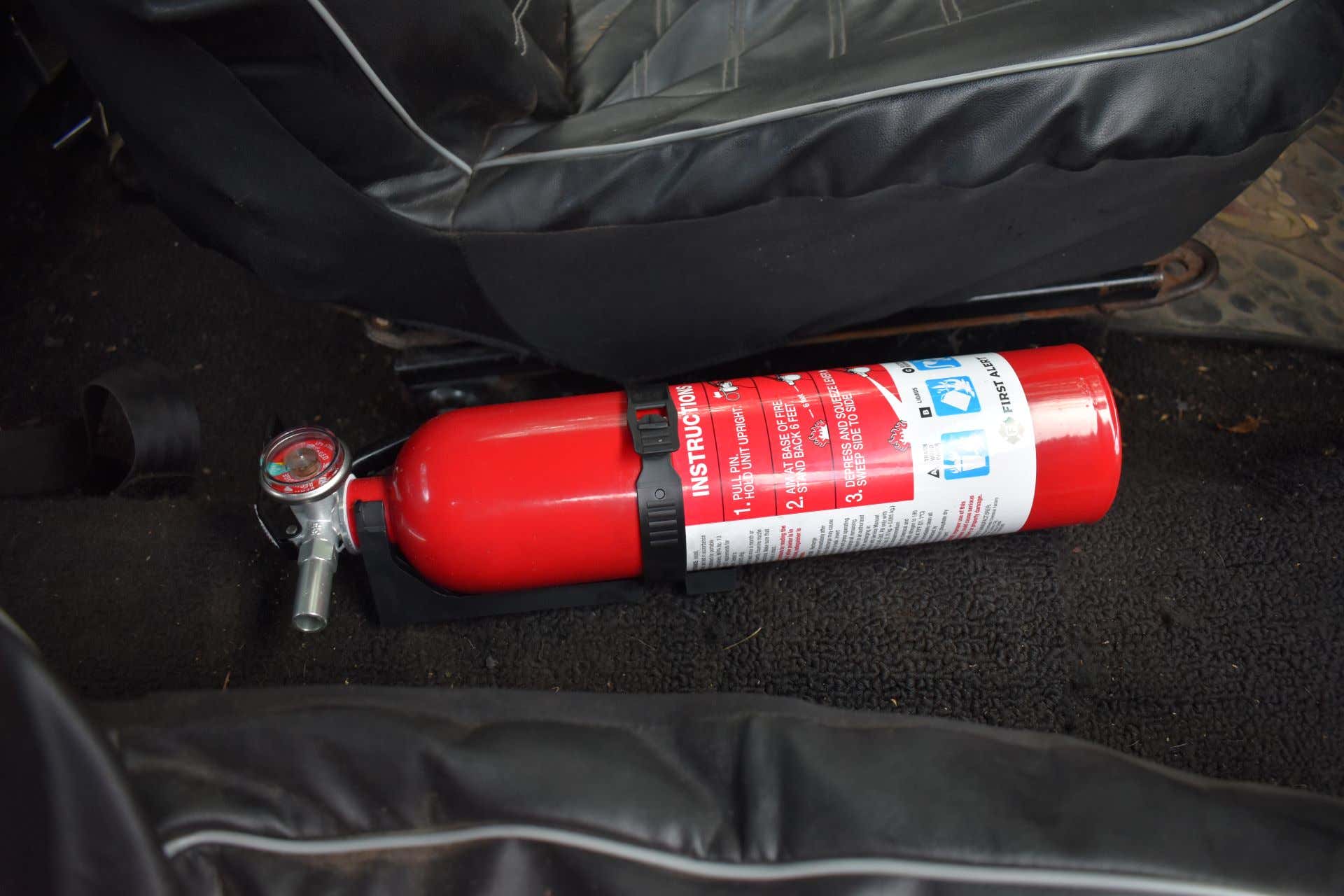 I ditched my center console a few weeks ago and my fire extinguisher took its place. I know, my rug is a mess. I’m open to suggestions on a decent shop vac.

Where Should You Mount a Fire Extinguisher?

Many suggest keeping your fire extinguisher in your trunk, but that’s not the best idea. It means you don’t have instant access to it, and wasting time during a fire can lead to significant damage. Fires can quickly grow to unmanageable sizes.

On top of that, a lot of cars feature electronic latches these days. Say the fire takes out a couple of wires and knocks out the power. You’re not going to have access to that fire extinguisher. Find an alternative storage space that gives you better access to the extinguisher than the trunk does.

Race-car drivers often mount their extinguisher to a roll bar or somewhere similar. There’s also the option to run a fire-suppression system that can hit key areas, such as the engine bay and various parts of the fuel system. The way they work is ingenious; one large fire extinguisher can blast multiple locations. Rip cords are attached to the extinguisher, and activating it simply requires pulling a cord. These systems are more expensive, but they are definitely an option to consider for more serious driving such as on the track or off-roading.

I’m making do with the plastic bracket that came with the extinguisher until I decide on a permanent solution. There are plenty of prefabbed mounts available making it possible for you to mount the extinguisher where you see fit. In my case, I’m married to the idea of fixing mine to the transmission tunnel since I no longer have a center console. It also gives me instant access to it from the driver’s seat.

Let’s Talk: Comment Below and Reach Out to the Guides & Gear Editors

We’re here to be expert guides in everything “how to” related. Use us, compliment us, yell at us. Comment below, and let’s talk. You can also shout at us on Twitter or Instagram or reach us all here: [email protected]