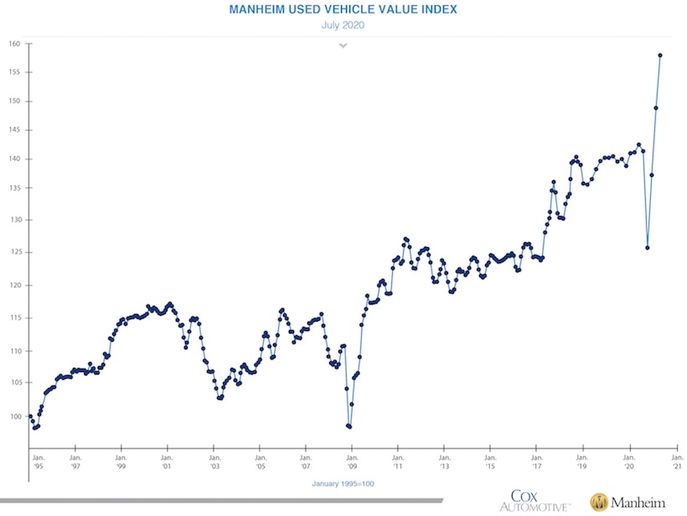 Wholesale used vehicle prices increased 5.84% month over month in July, bringing the Manheim Used Vehicle Value Index to 158 a 12.5% increase from a year ago and another record-high for the Index, which also occurred in June, according to Cox Automotive.

Improvements in the Manheim Market Report (MMR) were seen over the four full weeks of July, resulting in a 4.9% cumulative increase on the three-year-old Index, according to Cox. On a year-over-year basis, most major market segments saw seasonally adjusted price increases in July, with luxury cars and pickup trucks outperforming the overall market.

MMR Retention, which is the average difference in price relative to current MMR, was greater than 100% for nearly every day in July and averaged 102.5% for the month, Cox announced. The MMR Retention trend reflected that vehicles were still selling above current MMR values and was a continuation of the price trends in the previous two months.

Total used-vehicle sales volume was down 4% year-over-year in July, according to the report. The July used seasonally adjusted annual rate (SAAR) is estimated at 38 million, down from 39.7 million last July but up from June’s 36 million rate.

Used-vehicle sales volume in the U.S. was down 4% in July. The July used retail SAAR estimate is 20.4 million, down from 20.8 million last year but up month-over-month from June’s 18.9 million rate.

Consumer Confidence in July increased 5.8% and left confidence down 32% year-over-year. Plans to purchase a vehicle in the next six months declined in July and is now down year-over-year.

Related posts:
Insults fly as F1 bosses speak out over Racing Point case
Classic Chevy Steering Upgrade
Best News
Drivers may be fined £5,000 and ‘likely’ see car insurance rise by splashing pedestrians
12/04/2020
FBI: No crime committed as ‘noose’ rope was there in 2019
06/23/2020
Why VW Pulled The Plug On A 400bhp VR6 Arteon R
06/23/2020
2021 Kia Grand Carnival breaks cover – solid looker! – paultan.org
06/24/2020
New Volkswagen Arteon Shooting Brake arrives as part of facelifted line-up
06/24/2020
Recent Posts
This website uses cookies to improve your user experience and to provide you with advertisements that are relevant to your interests. By continuing to browse the site you are agreeing to our use of cookies.Ok