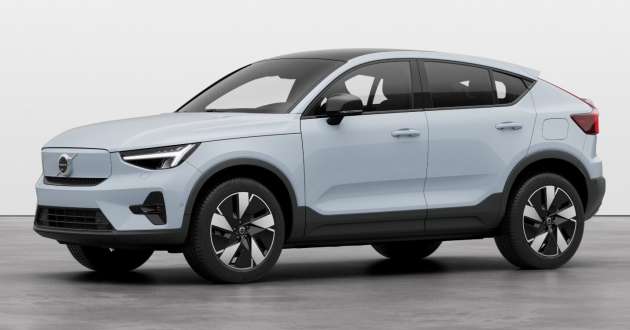 Volvo has announced some big changes for the XC40 and C40 Recharge Pure Electric models, with both receiving improved range as well as new or revised powertrain options.

Starting with something familiar, the all-wheel drive variant (P8) now features electric motors developed in-house. Instead of the previous setup that featured two e-motors that each output 204 PS (201 hp or 150 kW), the front asynchronous e-motor is now rated at 159 PS (157 hp or 117 kW), while the rear permanent magnet unit provides 249 PS (245 hp or 183 kW).

However, the 82-kWh lithium-ion battery pack powering the e-motors has been improved with better cooling. As such, the XC40 range is now 500 km, which is 62 km more than before. The same is also true of the C40 that can now do 507 km instead of 451 km – these figures are according to the WLTP standard. New 19-inch wheels that cut down on drag also help with the efficiency.

Of more significance is the introduction of a rear-wheel drive electric powertrain for the SUVs, which Volvo says is the first time in 25 years that is offering a RWD product. This replaces the front-wheel drive setup (P6) that it previously offered, and the new Single Motor RWD variant offers 3% more power thanks to the in-house developed electric motor.

Volvo says the rear-mounted permanent magnet e-motor delivers 238 PS (235 hp or 175 kW) instead of 231 PS (228 hp or 170 kW), but once again, the century sprint time is the same at 7.4 seconds. The same 69-kWh battery of the previous FWD variant is carried over, albeit also benefitting from improved cooling for better range.

For those that need more performance but don’t want to step up to the AWD variant, Volvo also offers a Single Motor Extended Range RWD variant for both SUVs. This comes with an 82-kWh battery pack that can be DC fast charged at a max of 200 kW (previously 150 kW), with a 10-80% SoC achieved in approximately 28 minutes. Fully charged, the Single Motor Extended Range RWD variant of the XC40 will do 515 km, while the C40 is capable of 533 km.

The higher-capacity battery also juices a slightly more powerful e-motor on the rear axle, which is rated at 252 PS (248 hp or 185 kW). Even so, the quoted 0-100 km/h time is the same as the regular Single Motor RWD at 7.4 seconds, likely due to the additional weight from the battery.