Vinfast VF8 Prototype First Drive: Half A World And Months Away

My finger poked at the D-for-drive button on the center console again to no avail. “Is this thing even on?” I mused aloud. Already in gear, there was no indication of any change of state from Park until my right foot pressed the accelerator significantly further than expected to finally engage the electric powertrain. It was an inauspicious start to a first drive of the vanguard for a new Vietnamese auto brand. 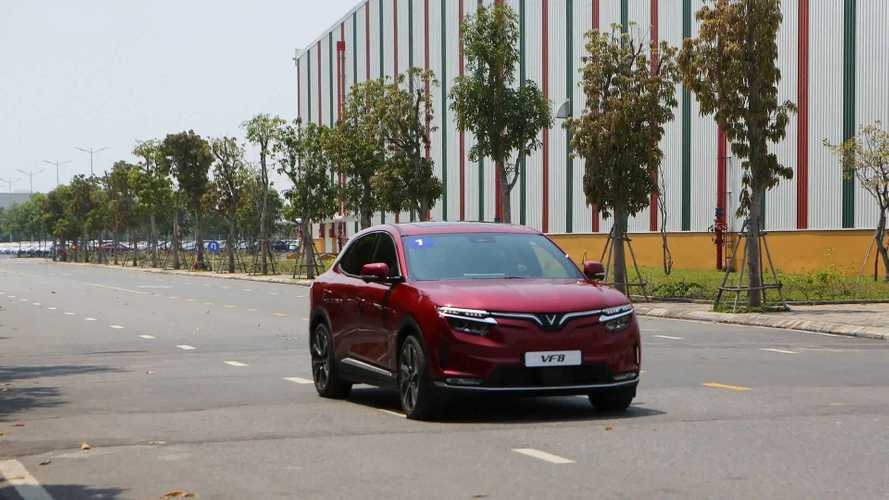 Moments before, I’d climbed into the driver’s seat of a glossy red preproduction copy of the Vinfast VF8 in Plus trim, the top-spec equipped with the largest of two battery options. Like the exterior, the design of the interior of the mid-size crossover looked mature — somewhat unique, but still familiar. The seats were comfortable and supportive, the leather-wrapped, flat-bottomed steering wheel was contoured to fit hands just above the horizontal spokes. The front passengers were separated by a console swathed in leather that spanned the entire distance from the seatback to the dashboard.

The single 15.6-inch screen in the cabin was placed at the center of the dash in landscape orientation à la Tesla Model Y. The layout of the interior and the quality of materials and workmanship make it feel at least as premium as that car. For the base price of $48,000, plus a $35 monthly battery rental fee, with an additional $.11 per mile, if you exceed 310 miles per month (they also offer an unlimited mileage battery lease for $110/month), the initial presentation of the five-seater met my minimal expectations. It will likely be shopped against the likes of the Kia EV6 or Hyundai Ioniq 5, where it might come out on the losing end because of the fussy battery pricing. 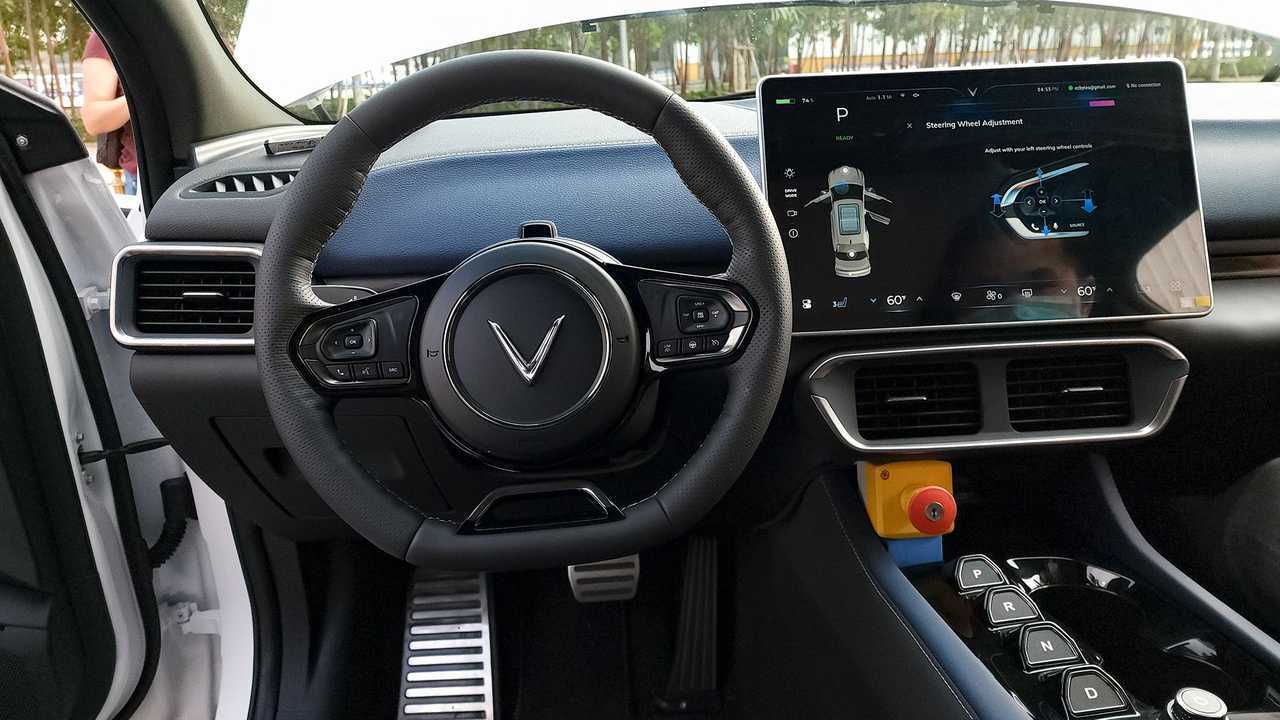 My time in the driver’s seat was short. Although I, along with dozens of journalists, influencers, investors, and business partners had been brought all the way to Vietnam for five days by Vingroup – a massive conglomerate with businesses in a number of sectors – as part of an ambitious program called Vingroup Elite Vietnam 2022 – the time allocated to actually experiencing this first Vinfast vehicle for both domestic and foreign markets was limited to a two-kilometer spin in, basically, a straight line.

Held on the vast grounds of the automaker’s factory complex in Hai Phong, situated on the coast in the northern part of the country, we were able to drive a half-kilometer down a private road where we could then turn around and go for a full kilometer in the opposite direction before reaching a roundabout. There, we could swing around and bring the car back to its original starting point.

The route was so short I’d been worried it wouldn’t be enough to get any real sense of the vehicle’s readiness for the North American market. The company plans to begin delivering this first VF8 model in the US before the end of 2022. With such an ambitious timeline, I expected the vehicle to feel practically production-ready. It was not. 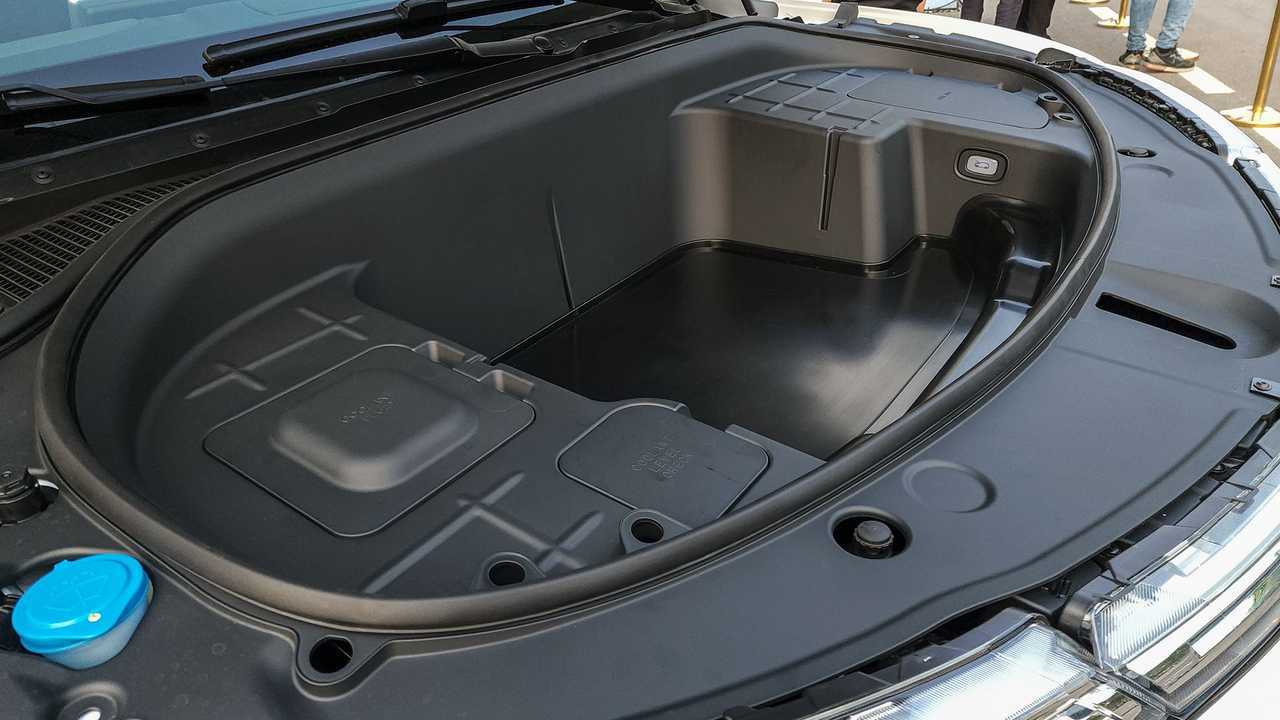 Not quite ready for prime time

Well aware of the brevity of the opportunity, I tried to pay close attention to all the details of the experience, especially the nuances of the electric powertrain. In particular, I wanted to judge the pedal calibration from a standstill to the beginning of movement as well as the responsiveness of the regenerative braking. This is where the car fell on its lovely Pininfarina-designed face.

Buckled in, I tapped at the center screen to select a particular regenerative braking setting.  The menu on another copy of the car, which was on static display nearby, hinted there should be two different regen levels along with a true one-pedal mode.

Unable to find any mention of regen on this car’s menu, I asked the company minder in the passenger seat for assistance, who informed me that this car didn’t have different regen levels available. Deep sigh.

My expectations lowered, I pressed the drive button and began to gently push down on the accelerator pedal. Nothing happened. That’s when the panic set in and I started muttering to myself and checked to make sure the car was actually in gear. Assured it was, I tried again.

The travel of the accelerator pedal to the first movement felt like it had to be at least half an inch, but finally, the car started moving. Crisis averted. I gave it a few beans and it responded nicely, the dual-motor all-wheel-drive setup with 402 horsepower and 457 pound-feet of torque bringing the car quickly to speed. The Plus is said to be good for a 5.3-second zero to sixty, and it might actually meet that specification. 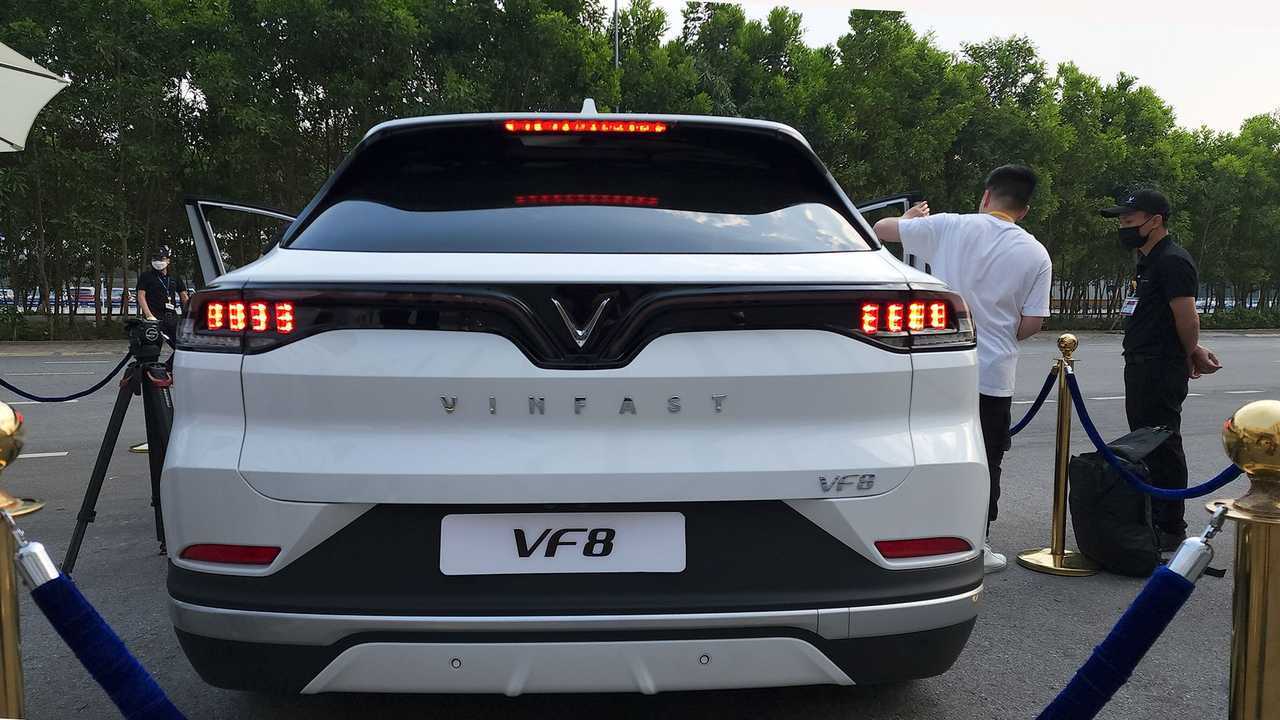 Speaking of specs, although both Eco and Plus trims will offer two battery size options — standard range (SR) 82 kWh usable, good for 260 miles in Eco and 248 miles in the Plus, or extended range (ER) 87.7 kWh usable for 292 (ECO) or 277 miles (Plus) – the performance appears to be the same regardless of battery size. This is a little unexpected, so it will be interesting to see in future testing whether this holds true.

The motors did their business of turning electricity into speed fairly quietly. There was, however, a slight high-pitched whine that was also audible when the electrons were really pumping, possibly coming from the inverter.

We quickly reached the end of the first short stretch and turned to point the car down the main stretch. I put the pedal to the floor from a roll and again, the crossover picked up speed quickly, but with some composure – none of its wheels slipping.

Letting off the accelerator, there was some light amount of regenerative braking in effect. Less than most experienced electric vehicle drivers would wish for, but at least the system had some functionality.

Driving through the turn-around traffic circle at the end of the straight, I laid on progressively more throttle and powered hard through the last 50 degrees of the turn. The car, which had exhibited a fairly soft ride, had some amount of body roll, but of course, with the heavy battery pack creating a low center of gravity, it was well within expectations.

More importantly was the fact the chassis seemed quite balanced, with just a hint of understeer as one might like, powering hard through the turn. A positive note to end the short test on. 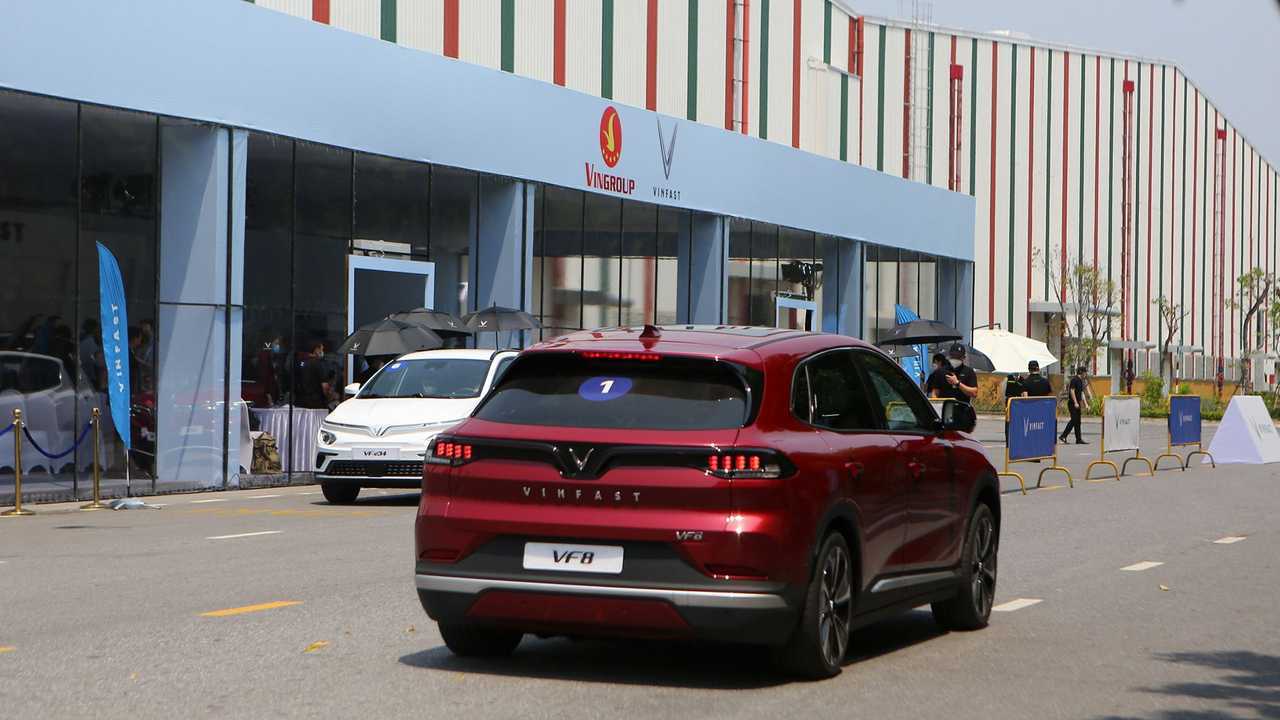 After the drive, I had the opportunity to speak with the chief engineer for the Vinfast VF8 program, Huy Chieu. He, like other company representatives, was keen to hear feedback from the various participants. It was also an opportunity to learn more about the car and its development.

I, and others, voiced our concern about the car’s readiness, explaining that a car this close to production should have a proper regenerative braking setup, better pedal calibration, and better overall refinement. Sure, it was a pre-production vehicle, but it’s not like Vinfast is a known quantity like, say,  Mercedes or BMW. Other automakers also allow their not-yet-fully-baked product to be tried by auto journalists but they also have a track record of bringing fully-developed vehicles to showrooms within their timelines.

Chieu, who has decades of automotive engineering experience, mostly at General Motors where he most recently was involved in the Ultium system that will underlie the upcoming Cadillac Lyriq, took in our concerns with interest. He allowed that the timeline is short. Start of production for US cars could begin around the end of August, with domestic production starting as soon as May.

Yes, he conceded, the timeline was short but Vinfast, in its brief history, has been all about speed – accomplishing big things in a short period of time. Chairman Pham Nhat Vuong was known for setting hugely ambitious targets and selecting the right people to achieve results. The land on which we stood, for example, was basically a swamp two years before its first vehicles started rolling from the factory floor. 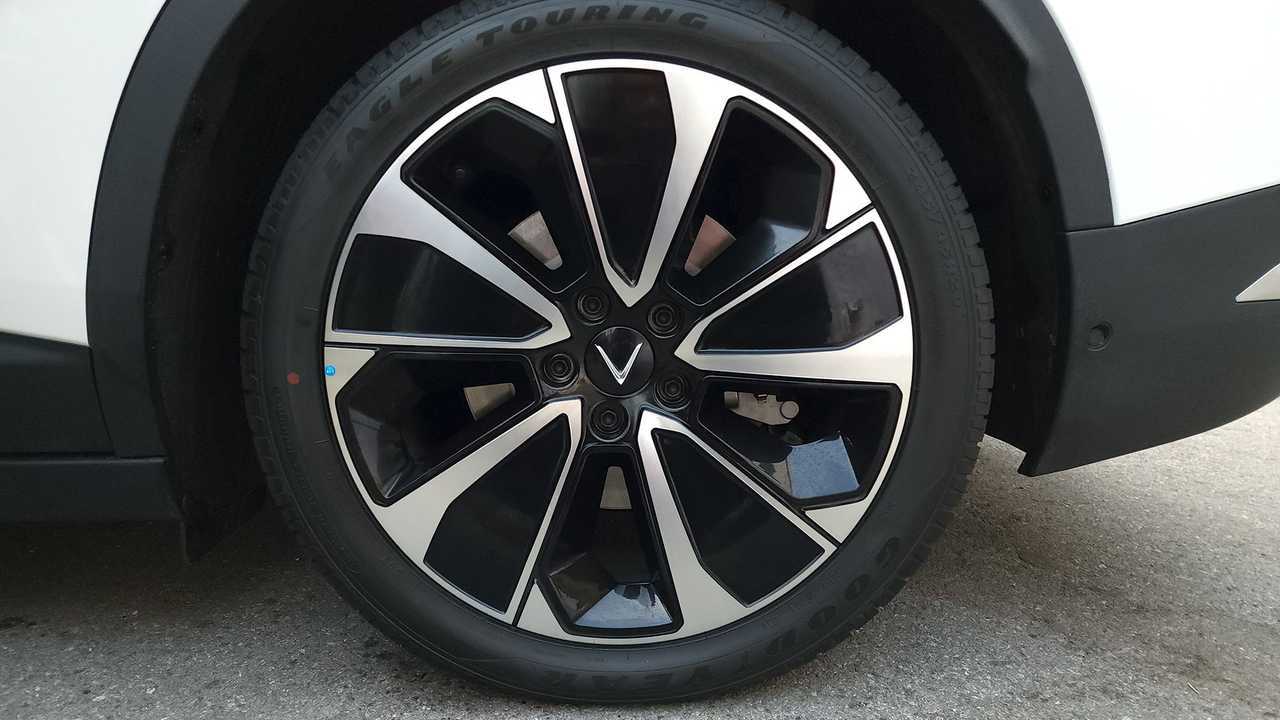 In the case of the VF8, the hardware was pretty much in place, though he did admit they were going to dial in the suspension a bit more, based on the recent results of testing in Spain. He also admitted there was a chance the one-pedal driving mode might have to be added after delivery for some owners via an over-the-air (OTA) update.

We won’t have to wait long to see what kind of progress the company is making toward its VF8 goals. The automaker is bringing vehicles over to the US very soon and again putting them in the hands of a critical press. And this time, the course is expected to be longer and more challenging.

While we’re not completely confident these vehicles will have reached a state of showroom readiness in a matter of a few weeks, we do know that this young automaker isn’t afraid of feedback while it swings for the tall fences. 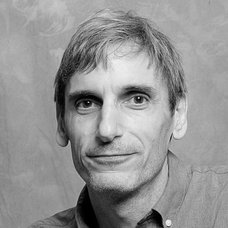