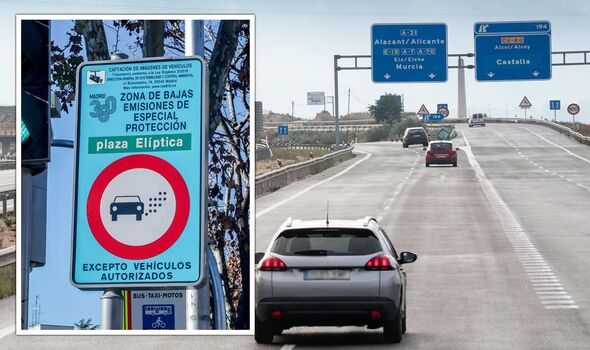 Any UK drivers looking to go on holiday this year could be hit with unnecessary fines this year when driving in popular tourist destinations like Spain. The Spanish Government has been keen to push forward with climate change and energy transition legislation in recent years to slash emissions.

As a result, a series of Low Emission Zones – or Zonas de Bajas Emisiones (ZBE) – have been introduced across the country after January 1.

The new rules will apply to municipalities with more than 50,000 inhabitants, which number 149 across the Spanish territory, according to The Local.

Authorities in municipalities with more than 20,000 inhabitants and high air pollution levels will also have to introduce the new measures.

These LEZ’s will restrict access, circulation and parking for more polluting vehicles, although town and city halls will have a certain degree of autonomy as to how they apply the new rules.

To enter the cities on working days between 7am and 8pm, a vehicle must comply with Euro 3 petrol standards and Euro 4 diesel.

Drivers must also purchase the correct badge for the vehicle before entering the controlled zone.

Cars that are not eligible for a sticker are classified as “A” and cannot be used in Spain’s existing ZBEs as they’re considered too polluting, and it is unlikely they will be allowed in future ZBEs.

B and C label vehicles will have certain limitations which will be determined by city and town halls, as the national government has not set specific rules that apply across Spain.

Halfords is offering an incredible deal where you can join the Premium Halfords Motoring Club and get FREE MOT from just £4.99 a month. With benefits worth over £100, don’t miss the chance to join now.

You can get also get a FREE membership when you join the Halfords Motoring Club, which includes a FREE 10 point car check, £10 off MOT and more.

The two most notable cities with LEZs are Barcelona and the capital, Madrid, with marked signs informing drivers of when they are travelling through a ZBE.

Barcelona can also bar entry of all cars into the centre of the city when an episode of excess NO2 pollution is declared.

Vehicles registered outside of Spain are not classified according to the environmental label criteria of the Directorate-General for Traffic (DGT).

This is why all foreign vehicles must be registered in the Metropolitan Registry to drive through the ZBE of the metropolis of Barcelona.

There are also low emission zones in Seville, Valencia, and Valladolid – however, they are weather-related air protection zone and are only activated when there is severe air pollution, the RAC reported.

The Spanish Government has also ended its state subsidy for every litre of petrol and diesel, with only a few exceptions remaining.

The subsidy took 20 cents (18p) off the price of every litre of fuel and was introduced in April, with the Government renewing the discount in June and September.