Home » Car Reviews » UK car production down 95.4 per cent in May

UK car production down 95.4 per cent in May

Just 5,314 cars were manufactured in the UK in May 2020, with factories either closed or restarting with reduced capacity 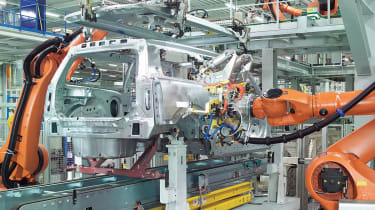 Car production in the UK was down 95.4 per cent year-on-year in May 2020, with some plants remaining closed due to lockdown while others reopened with fewer staff and smaller capacities.

A total of 5,314 cars rolled off UK production lines during the month. This was at least an improvement from the 197 in April 2020, but was still the worst May since records began in 1946.

Around two-thirds of UK car plants reopened in May, according to the Society of Motor Manufacturers and Traders (SMMT), but capacity was reduced and demand was low. Some 4,260 cars were built for export, while a further 1,054 were made for the home market.

In the first five months of 2020, UK car factories have produced 324,763 cars – down 41.7 per cent from the same period last year. It’s likely that less than one million cars will be manufactured in the UK this year.

Mike Hawes, chief executive of the SMMT, commented: “May’s figures are yet more evidence of why the UK industry, like its global rivals, needs dedicated support to drive a successful restart.

“Government assistance so far has been vital in keeping many businesses afloat, but the job isn’t done. Measures to boost cash flow – including additional and tailored finance schemes, tax relief and business rates deferral – would deliver immediate results when liquidity is most acute.

“We have to retain the highly skilled jobs the sector provides, but also ensure the business conditions are competitive so we can unlock the investment that will drive long-term recovery – a green recovery – which is inextricably linked to the sector’s success.”

The news comes after the SMMT welcomed the Government’s announcement that it was “turbocharging” free trade agreement negotiations with the EU. The industry body has warned that the “imposition of tariffs, customs duties and disruption at the end of the transition period would be devastating”.

What do you think of the UK car manufacturing decline? Let us know in the comments below…