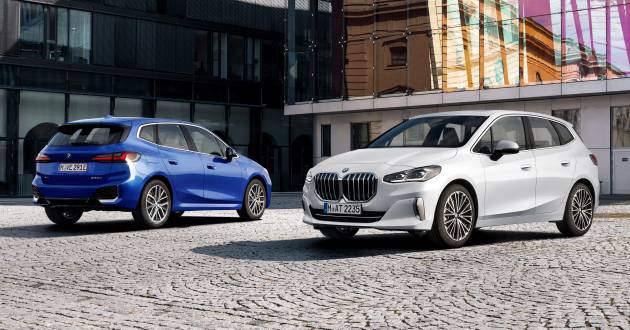 BMW has unveiled the redesigned 2 Series Active Tourer (codename U06), which replaces the F45-generation model that has been around since 2014. Now built on the company’s FAAR (Frontantriebsarchitektur) platform that also underpins the latest 1 Series and 2 Series Gran Coupe, the compact MPV gets a new look, technologies and a comprehensive line-up of powertrains, all while still delivering on the practicality front.

In terms of styling, BMW decided to give the 2AT a little more presence, so there’s a large, octagonal-shaped kidney grille making up most of the front fascia. This is positioned just below the sharper headlamps to produce a line that points towards the road for some dynamism. BMW also pointed out that the radar sensor for the optional driver assistance systems is integrated into the central section of the grille surround for a cleaner appearance.

On the mention of the headlamps, the clusters themselves have a sharper profile than before and now bear BMW’s familiar L-shaped daytime running light signature. LED technology comes as standard, but customers can upgrade to a more advanced adaptive LED setup that includes a cornering light function and non-dazzling matrix high beam.

Along the sides, the 2AT’s profile doesn’t drift too far from the F45, but there are notable tweaks. For starters, the Hofmeister kink near the rearmost pillar has been watered down, while the body eschews the sharp crease lines near the (now flush) door handles.

Elsewhere, you’ll find character lines (between the doors and below the window line) that rise upwards, and if you squint just enough, you’ll notice the A-pillars are more heavily raked than on the predecessor model, along with slightly slimmer C-pillars.

Moving to the rear, slim taillights wrap around the edge of the body to emphasis the vehicle’s width and come with L-shaped graphics if the adaptive LED headlamps are specified. Other things to note are the exhaust tailpipes integrated into the rear apron to keep them out of sight on all variants of the 2AT. To compensate, L-shaped borders are added to the reflectors on the outer edge of the rear bumper.

BMW says this shape allows for a drag coefficient as low as 0.26, which should help with fuel economy, as is the use of an aluminium bonnet and plastic supports for the doors to help save more weight.

As with other BMW models, customers have a few appearance packages to choose from as alternatives to the standard specification. The white car in the photos is dressed in the Luxury Line package, which adds kidney grille bars and side window surrounds in Aluminium satinated, trim strips and decorative trim in Pearl-effect Chrome for the aprons.

The bumpers that come with the Luxury Line package are also subtle and feature discreet air curtains that flank a lower intake highlighted by a thin chrome strip. Similarly, the rear bumper gets slim reflectors and the aforementioned L-shaped borders.

For something a lot more aggressive, there’s the M Sport package (applied on the blue car) that adds on a new bumper with a trio of air intakes, including two fake ones at the corners that lead into the air curtains. The lower intake is also more expressive thanks to its honeycomb mesh insert, while the rear bumper gets faux outlets and a decorative diffuser-like element in black.

As with the Luxury Line, the surrounds for the side windows, air curtains and reflectors come in Aluminium satinated, although there’s an option to get them in a High-gloss Black finish as well. For some reason, the M Sport also gets a recessed base for the BMW badge above the grille. A total of 11 paint finishes will be offered (two non-metallic and nine metallic), along with wheel sizes ranging from 16 to 19 inches. 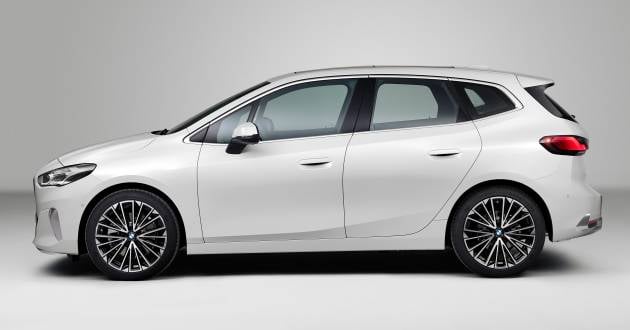 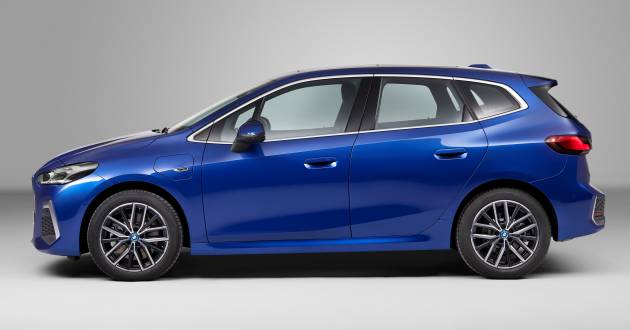 Stepping inside the new 2AT, you’ll find a totally overhauled cabin that draws some inspiration from the iX. The most obvious are the 10.25-inch digital cluster and 10.7-inch touchscreen that make up the BMW Curved Display, which is slightly angled towards the driver and linked to the latest iDrive system powered by BMW Operating System 8.

The infotainment system comes with all the configurability and connected services you’d expect, but BMW took things a step further by also integrating the controls for the standard two-zone climate system (with rear vents) in order to reduce the number of buttons and promote the use of the built-in BMW Intelligent Personal Assistant.

As a result, there’s a large air vent under the touchscreen, which is one of four that covers a wide area across the dashboard. Another item adapted from the iX is the “floating” armrest that accommodates various things like the gear selector, My Modes drive mode selector (Personal, Sport and Efficient), media controls and electronic parking brake, just to name a few.

The space underneath the armrest, which is the actual centre console, is used as a storage compartment and extends upwards to the central air vent, ending in a pair of cupholders and a slot that houses a wireless charger. 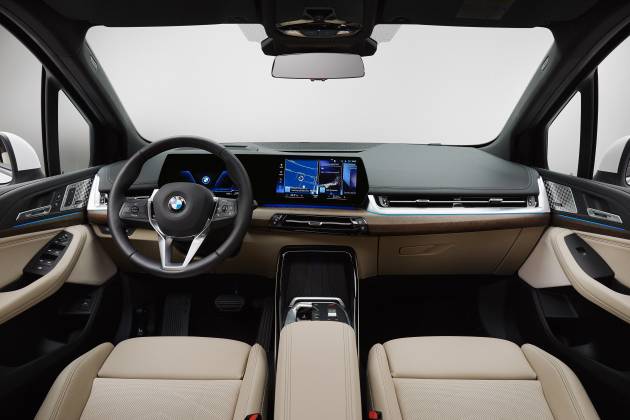 Now, the main draw of the 2AT has always been its practical interior and variable arrangement of space, both of which has been improved with the new model. Ergonomic seats are complemented by increased headroom, shoulder room and elbow room courtesy of the bigger body, while the rear seats can be folded in a 40:20:40 split, same as before.

Boot capacity has also been increased by 90 litres with the seat backrests set to cargo position, and as an alternative, there’s an optional forward/back adjustment where the individual sections of the rear seat bench can slide forward (following a 60:40 split) by up to 13 cm either individually or together.

According to BMW, the load capacity ranges from 406-470 litres in standard form to 1,370-1,455 litres with the seats folded down (depending on the variant). Comfort Access and a powered tailgate help to make cargo loading easy, and a trailer tow hitch is offered as an option, as are roof rails.

Safety and driver assistance systems that come as standard include cruise control with brake function and front-collision warning, the latter with a braking function, pedestrian and cyclist detection as well as being able to react to oncoming traffic.

Finally, onto the mechanical aspects of the 2AT. With the new platform, the MPV gets a near-actuator wheel slip limitation system integrated into the traction control system, similar to the 1 Series. This allows the system to apply corrective inputs up to 10 times faster when wheel slip is detected to ensure optimum traction even on slippery roads.

An integrated braking system also delivers better stopping power and reliable pedal feel, with all aspects integrated into a compact module. Meanwhile, the chassis uses redeveloped McPherson struts at the front and a modular three-link setup at the rear, both mounted to more rigid subframes for better handling.

The 223i and 220i mark the first time the 2AT gets a 48-volt mild hybrid system, where an electric motor integrated into the transmission acts as a starter generator and power booster. The latter allows for a brief 19 PS (19 hp or 14 kW) boost when accelerating, and the system also helps smooth out the Auto Start Stop function recuperates power during braking and coasting to recharge the 20-Ah battery located in the luggage compartment. The 2AT will also gain a pair of plug-in hybrid variants in 2022, both using fifth-generation BMW eDrive technology. The setup sees an electric motor acting on the rear wheels, combined with a turbocharged three-cylinder petrol engine driving the front wheels to provide all-wheel drive.

Additionally, the AC charging rate has also been doubled to 7.4 kW from 3.7 kW previously, which means the battery can get from a 0-100% state of charge in around 2.5 hours (previously 3.2 hours). The larger battery also provides up to 80 km of electric-only range based on the WLTP cycle, which is again, an improvement over the 225xe that can only muster up to 57 km.