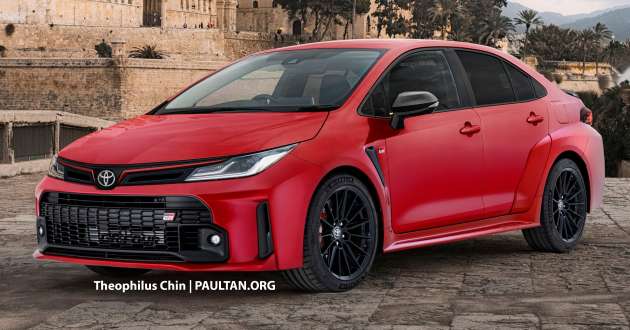 Do you like the look of the Toyota GR Corolla but wished it came with a sedan body style as opposed to a hatchback for more boot space? Sadly, Toyota isn’t offering anything of the sort but through the magic of rendering, Theophilus Chin has created just such a vehicle in the digital space for your consideration.

Rather than using the US-market Corolla, which has a different face compared to other markets, as a base, Theo opted for something a little more familiar in the form of the current Corolla we have here (also known as the Corolla Altis in Thailand). From there, he grafted on various elements from the GR Corolla and ended up with what you see before you.

The first thing that grabs your attention on the rendered GR Corolla Sedan/Altis is its aggressive front fascia, which features a large central intake flanked by circular fog lamps and vertical air inlets at the corners of the bumper. 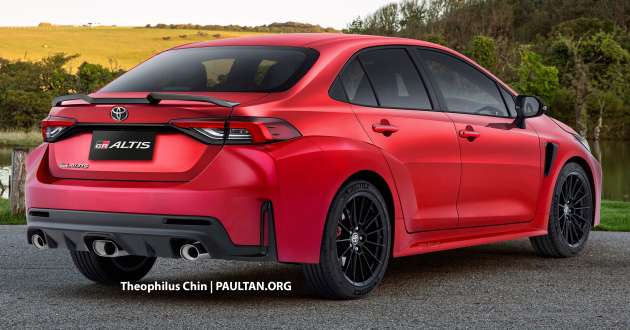 The standard car’s protruding “hump” between the headlamps has also been omitted to make room for the gapping mouth, with the area restructured to sport functional air inlets bridging the unchanged headlamp clusters.

Down the sides, we find flared wheel arches front and rear, with the former accompanied by air outlets marked by the GR badge. There are also side skirts with “GR-Four” embossed on them as a reference to the car’s all-wheel drive powertrain, which consists of a G16E-GTS 1.6 litre turbocharged and direct-injected three-cylinder engine making 304 PS and 370 Nm of torque, with a six-speed manual attached.

At the rear, the boot gets a more subdued spoiler compared to what you’ll find on the real GR Corolla, while the lower apron receives the same unique triple-tailpipe setup. As the placement of the number plate on the sedan is already higher up, there’s no need to create space in the bottom portion of the bumper, hence less black trim is needed.

So, what are your thoughts on Theo’s take on a GR Corolla Sedan/Altis? Looks incredibly striking, don’t you think? As he puts it, there’s a possibility that someone or a company will attempt to create a body kit in this fashion for the Corolla sedan. Would you pay the money for the look?