The 2021 BMW 4-Series Convertible is Here

Following the reveal of the M3 sedan and the M4 coupe, BMW is showing off the latest-generation 4-Series Convertible. While it might be hard to believe, this is only the second generation of the 4-Series Convertible since it was spun off the 3-Series lineup in 2013. For 2021, BMW aggressively restyled the 4-Series, added some oomph and expanded its technical powers with extra tech.

As you’d expect, the changes follow its fixed-top counterpart that debuted earlier this year. The powertrains, for example, are exactly the same. Base 430i badged cars move along by way of a 2.0-liter turbocharged inline-four-cylinder engine making 255 hp and 295 lb-ft of torque. Stepping up to 440i badged convertibles you find BMW’s beloved B58 inline-six. For those that don’t speak BMW, it’s a 3.0-liter straight-six making 382 hp and 369 lb-ft of torque. Both powertrains make more power than their predecessors, with the inline-four making 7 more hp and the straight-six up 69 hp. Oh yeah, and a hybrid system will be standard on models using the 3.0 liter.

This 4-Series is available in rear-wheel-drive or all-wheel-drive depending on how much you want to spend. The standard transmission is an eight-speed automatic. To get the manual, you have to pay for the “M” badge, which might be unfortunate for some but understandable.

There are some changes to the Convertible the Coupe doesn’t share to make the former stiffer to compensate for the folding top design. BMW reinforced the 4-Series Convertible’s side skirts and the transmission tunnel. There’s also a rigid rear floor plate. BMW claims the reinforcements added to the 2021 4-Series Convertible make it 4 percent stiffer than its predecessor. That might not seem like much, but the outgoing 4-Series was plenty rigid, even in convertible form.

There is also some safety equipment specific to the drop-top. In the event of a rollover, the Convertible deploys high-strength aluminum bars from behind the head restraint to help protect passengers. These pre-tensioned bars use pyrotechnics to deploy quickly in an emergency. 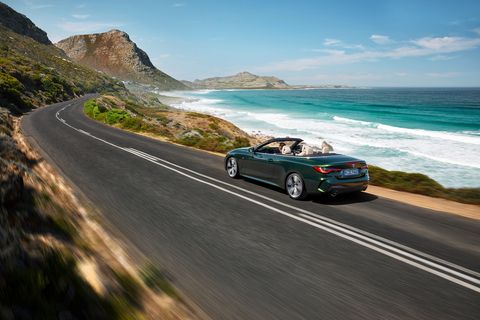 There are some changes to the 4-Series Convertible’s top, too. It sports a flush-mounted rear window, large panel bow elements and multiple layers of insulation to keep the noise down. The top should reduce wind noise when compared to the previous generation and is reportedly more aerodynamic. The top opens and closes in a respectable 18 seconds.

The 4-Series Convertible also shares the same standard active safety features as the coupe, meaning you’re getting a lane departure warning system with steering correction, frontal collision warning system and automatic high beams, among other tech features. There is some optional tech like adaptive cruise control with stop and go, traffic jam assist and front-cross-traffic alert with emergency stop assist. Of course, the extra tech adds to your monthly payment.

Related posts:
Kevin Magnussen: We deserved points at Sochi | F1 News by PlanetF1
2021 BMW 4 Series Convertible First Look: Details, Specs, and More
Best News
Sainz: McLaren deal allows post-season Ferrari test | F1 News by PlanetF1
12/04/2020
FBI: No crime committed as ‘noose’ rope was there in 2019
06/23/2020
Why VW Pulled The Plug On A 400bhp VR6 Arteon R
06/23/2020
2021 Kia Grand Carnival breaks cover – solid looker! – paultan.org
06/24/2020
New Volkswagen Arteon Shooting Brake arrives as part of facelifted line-up
06/24/2020
Recent Posts
This website uses cookies to improve your user experience and to provide you with advertisements that are relevant to your interests. By continuing to browse the site you are agreeing to our use of cookies.Ok