The typical Porsche owner doesn’t strike us as someone who would participate in extreme couponing or regularly shop at Save A Lot. But even wealthy folks can appreciate a good deal, right? Or perhaps the virtue signaling that comes with owning a plug-in hybrid tickles their fancy. Either way, we think the 2021 Porsche Cayenne E-Hybrid coupe offers a desirable combination of value and virtue—with a side of vanity, of course.

The Virtues of Virtue Signaling

Along with the charging port on the driver’s side rear fender, the only ways to visually distinguish the plug-in-hybrid Cayenne from the traditional gas-engine models are the brake calipers and exterior badge outlines in bright Acid Green. Don’t worry, anyone who doesn’t want the neon accents can have Porsche change them to black, free of charge.

HIGHS: One of the prettiest coupelike SUVs, nearly as quick as the Cayenne S but cheaper, eco-friendlier than nonhybrid Cayennes.

Porsche has increased the Cayenne E-Hybrid’s battery capacity for the 2021 model year by improving the pack’s energy density. It now has 14.3 kWh available to use for propulsion compared with 11.3 before. The upgrade contributes to a higher combined rating (46 MPGe versus 41) and more pure-electric range (17 miles versus 14). Both estimates apply to the regular E-Hybrid and its coupe counterpart, but the Porsche’s EPA combined rating and electric range still fall short of the plug-in-hybrid BMW X5 xDrive45e, Lincoln Aviator Grand Touring, and Volvo XC90 T8. For instance, the Lincoln gets up to 56 MPGe, and the BMW has 31 miles of all-electric range. However, the Cayenne fared much better in the real world, where the E-Hybrid coupe we tested went 20 miles on electricity alone at 75-mph highway speeds. The plug-in X5 traveled 25 miles, and the Aviator Grand Touring ran out of charge after 15 miles. When the electrons are all gone, Porsche says they can be fully replenished in about five hours with the standard 3.6-kW onboard charger hooked up to a 240-volt circuit. Opting for the 7.2-kW charger ($1230) cuts that in half. 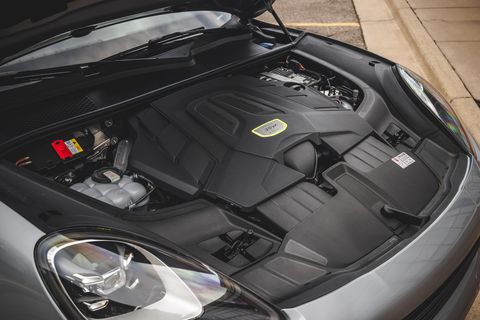 The Cayenne E-Hybrid’s plug-in powertrain isn’t the segment’s most efficient, but it’s arguably the most cohesive. Its features a turbocharged 3.0-liter V-6, an electric motor integrated into an eight-speed automatic transmission, and standard all-wheel drive. They combine for 455 horsepower and 516 pound-feet of torque. Driving in EV mode (E-Power) at city speeds, it moves confidently and quietly. Porsche also recalibrated the charging strategy in E-Charge mode (in which the gas engine charges the battery) so that the targeted state of charge is 80 percent rather than 100. This is said to improve its effectiveness and ensure that full regenerative braking is always available. In the drive modes where the gas engine is involved, the E-Hybrid is shockingly quick and responsive. We only wish the brake-pedal feel wasn’t so inconsistent, a byproduct of blending regenerative braking with friction brakes. At least the E-Hybrid qualifies as a true SUV with a max towing capacity of 7716 pounds­—same as the nonhybrids.

The Cayenne family is distinguished by two body styles: the traditional long-roof type and the trendy coupelike version. To our eyes, the Cayenne coupe is more aesthetically pleasing than the similarly sized BMW X6 and Mercedes-AMG GLE-class fastbacks. Plus, those Bimmer and Benz models aren’t available with a plug-in-hybrid powertrain. Chopping off part of the Cayenne’s roof might help it draw more attention, but it also makes it more expensive. The extra cost varies between $3000 and $5800 based on the trim level, and unfortunately the E-Hybrid gets hit with the highest surcharge. 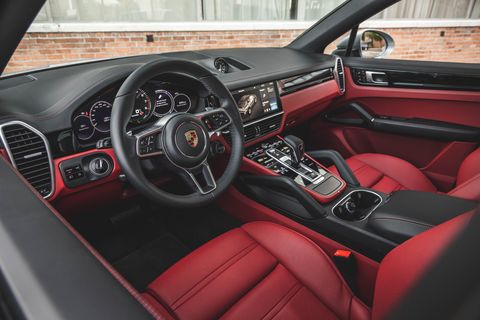 The Cayenne coupe also sacrifices cargo space compared with the regular body style, and the battery pack under the plug-in’s load floor further reduces the volume. Whereas there are 22 cubic feet behind the standard coupe’s rear seats, in the hybrid that shrinks to 18 cubes—just one more than in the smaller Porsche Macan. Despite the sloping roofline, bump outs in the headliner above the rear outboard seats help prevent any headroom qualms when sitting back there. However, the middle spot was uncomfortable even for this five-foot-ten author due to the lower ceiling and the driveshaft tunnel that disrupts foot space. The cabin is meticulously screwed together and uses rich materials, and the countless individual and custom options offer nearly infinite personalization. Porsche’s infotainment system isn’t our favorite to interact with, but its large touchscreen has crisp graphics. Standard wireless Apple CarPlay and wired Android Auto help the experience.

Forget for a moment that our Cayenne E-Hybrid coupe had $15,290 worth of options, which pushed its as-tested price to $104,240. Of those, we’d keep the $1620 rear-axle steering that makes it more maneuverable and the $2170 adaptive air suspension that smooths out the ride and helps keep it flat in the corners. However, big-ticket items such as the $4180 red leather interior and $4980 Premium package (Bose stereo, blind-spot monitor, LED headlights) are superfluous to the driving experience. The E-Hybrid coupe starts at $88,950, but it’s eligible for a $7500 federal tax credit that cuts it to $81,450. 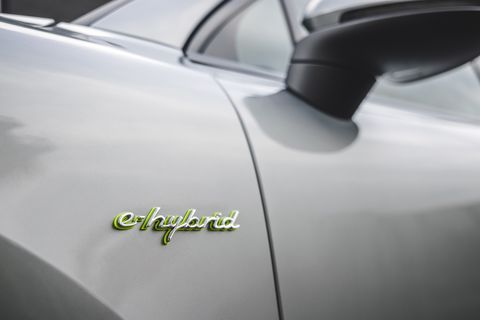 To us, that makes it a better value than the 434-hp nonhybrid Cayenne S coupe, which starts at $91,250. The hybrid’s performance is nearly equal to the more powerful S. Rolling on a set of 20-inch wheels shod with Pirelli P Zero summer tires, it hit 60 mph in a blistering 4.2 seconds and ran the quarter-mile in 12.8 seconds at 108 mph. Those times are each only 0.1 second behind the last Cayenne S coupe we tested, despite the fact that the E-Hybrid is 476 pounds heavier. That particular S showed its superiority in cornering grip (1.04 g versus 0.91) and stopping power (148 feet versus 163), but it was wearing crazy Pirelli P Zero Corsa track tires. We’ll also admit that the plug-in’s extra mass diminishes its athleticism, as we learned with a similarly heavy 2019 Cayenne E-Hybrid. Still, it’s more satisfying to drive than most everything else in this segment. In the Cayenne hierarchy, the E-Hybrid coupe is bolstered by the three Vs: vanity, virtue, and value.

From: Car and Driver