During the third quarter of this year, Tesla once again expanded its market share, reaching new record levels, although the growth rate slowed down.

According to the industry data (trailing twelve months), Tesla’s market share in the US/Canada (counted together) appears to be somewhere around 3.3% and is moving toward 3.5%.

In Europe and China, the brand’s market share is very similar – slightly below 2% at a relatively low growth rate compared to the previous quarter.

The main reason for that appears to be various challenges in those two markets (including lockdowns in China, combined with paused production to upgrade the Tesla Giga Shanghai plant). The European market was mostly supplied from China (both Model 3 and Model Y). On top of that, Europe deals with Russia’s invasion of Ukraine, which affects almost all areas of the economy. 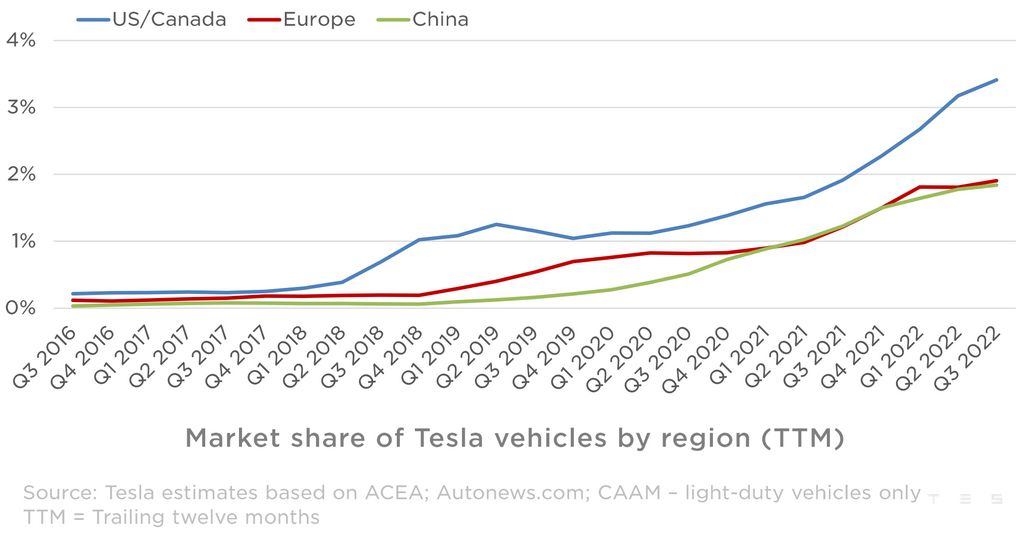 Tesla’s market share improved mostly thanks to an organic increase in production and sales of its electric cars (to a new record in Q3), but also limited sales of other manufacturers.

With an ongoing expansion of manufacturing capacity at the two main plants – one in California and one in China, plus the ramp-up at the two newer plants – one in Texas and one in Germany – Tesla is expected to further increase sales in Q4. That should take the company to an even higher market share.

Tesla’s long-term target is to increase electric car sales – on average – by 50% year-over-year.

“We plan to grow our manufacturing capacity as quickly as possible. Over a multi-year horizon, we expect to achieve 50% average annual growth in vehicle deliveries. The rate of growth will depend on out equipment capacity, factory uptime, operational efficiency and the capacity and stability of the supply chain.”

We would not be surprised if in 2023 Tesla would be able to get to 4% in the US/Canada (actually it might be more), and quickly catch up in Europe thanks to the local production of the Model Y, combined with the upcoming start of sales of the refreshed Model S/Model X.

One thing worth noting is that Tesla already sold more than 3.2 million electric cars globally (since 2008) and its 12-month output improved beyond 1.2 million annually.