As we already know, Tesla is the first manufacturer to introduce a series-produced all-electric car with an EPA range of more than 400 miles: the 2020 Model S Long Range Plus can go up to 402 miles (646.8 km).

Just recently, the updated Model S rating was released on EPA’s website so we can see also the efficiency numbers. As it turns out, the combined energy consumption result is 117 MPGe – 288 Wh/mi (179 Wh/km). That’s over 5% better than previously. 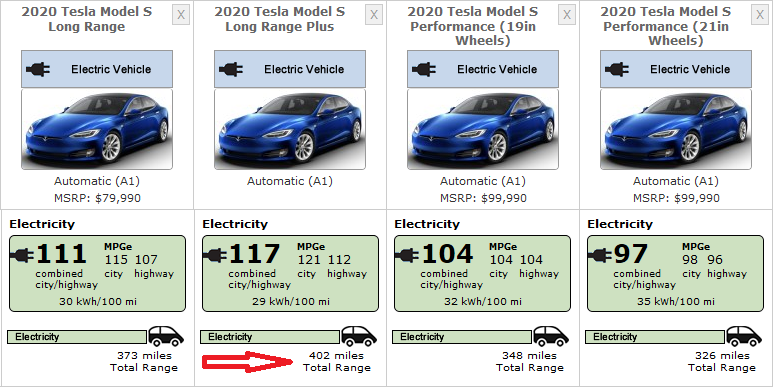 Considering that the prices of Model S are also lowered (now at $74,990 plus $1,200 DST), the value proposition is significantly better than a year ago.

Elon Musk said that the gradual improvements that allowed increasing the range to 402 miles EPA were implemented to all Model S Long Range Plus since January 2020.

Those new improvements include (see details in press release section):

When the Tesla Model S first came out in 2012, it was rated at 265 miles (426 km) of EPA range, if we skip the difference in testing over the years that might make the direct comparison flawed, the new 402-mile result is almost 52% better over eight years.

Deducting the change in battery pack size from about 85 kWh to about 100 kWh (by 17.6%), it seems that Tesla has improved the overall efficiency of the car by roughly 29%.

We are pretty sure that there is huge potential for future improvements for Tesla, which since the early beginning has made efficiency one of its key points.