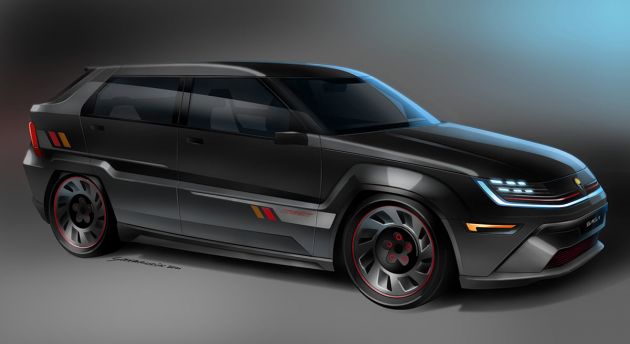 Former Proton designer and current head of industrial design at MIMOS Saharudin Busri has previously showcased his digital work, namely the Malaysian sports car concept from earlier this year as well as the Proton Savvy 18 concept and the crossover-esque Suprima X concept, both from 2017.

Unlike the sports car concept shown in June, Saharudin’s latest graphic rendition is based upon a past production car, albeit one with definite national interest, the Proton Saga Aeroback in Knight trim. Here, the angular front fascia of the original car is adopted in basic form, then given a futuristic slant with a full-width LED daytime running light.

Its side profile also adopts the original Saga Knight’s flat-topped wheel arches, which house a set of large, turbine-look alloy wheels shod in low-profile tyres and are tucked well into the wheelhouses to add to the modern aesthetic.

The front and rear wheel arches are connected by a full-length panel crease for continuity along the full length of the car, while the concept sketch also wears a pared-down version of the original car’s Knight decals in orange, red and grey.

Tail lamp treatment echoes that which is applied to the front end, where the full-width tail lamp adopts the increasingly popular arrangement seen on modern production cars. This is sited just beneath the bootlid spoiler that also forms the upper section of the rear fascia, and the outer ends of the tail lamp element offering a graphic that is suggestive of the original Saga Aeroback’s vertical tail lamp assembly.

Where Saharudin’s concept sketch appears to differ from the production car in overall silhouette is in the rear half of the roofline, where the concept seems to get a roof that extends further rearwards and joins a more upright C-pillar as a result, possibly yielding rear seating that is more capacious should a real-life build be realised.

What do you think of this modernised interpretation of the Proton Saga Aeroback Knight form, dear readers? does its capture enough of the original car’s style? Check out the video below for a glimpse into Saharudin’s process for the creation of this concept.