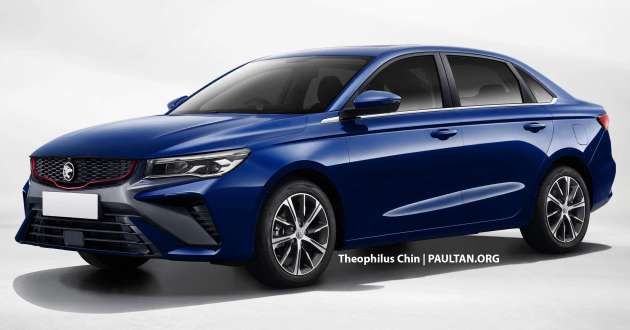 Another day, another render from Photoshop wizard Theophilus Chin, this time of a proposed Proton “S50” sedan. Eagle-eyed readers will remember that this is actually the third time the car has been visualised, first as a mash-up using the Geely Binyue (which eventually became the X50 SUV), then with the then-new fourth-generation Emgrand as a starting point.

This time, Theo has put the two together, pairing the Emgrand body with the front end of the facelifted Binyue (the 2021 one, not the more extensive nip-and-tuck that was leaked earlier in the year). The two-tone bumper features body-coloured “fangs” and a grey X-shaped centre insert that visually connects the headlights with the upper and lower grilles.

Notably, the upper grille gets a honeycomb mesh rather than Proton’s usual Infinite Weave pattern. Geely has been using the latter on its own cars, most recently on a facelifted Jiaji MPV, which was spotted in China earlier this month. It remains to be seen if Proton will change its own design language in response. 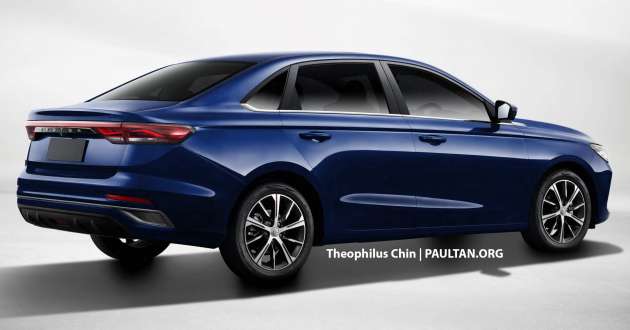 Otherwise, it’s the same as the regular Emgrand, with sharp projector headlights, a conventional three-box sedan profile, a prominent chrome window strip and full-length taillights with undulating light guides. The spaced-out Proton script on the boot lid is the only change at the rear.

As yet, it’s unclear if Proton will utilise the Emgrand as the basis for its sedan, given that the company said it will use its own platforms for future models, enabling greater design differentiation from Geely’s vehicles. One drawback of the Emgrand is the lack of any driver assistance systems like autonomous emergency braking, meaning that a significant amount of effort and money would be required to fit these systems.