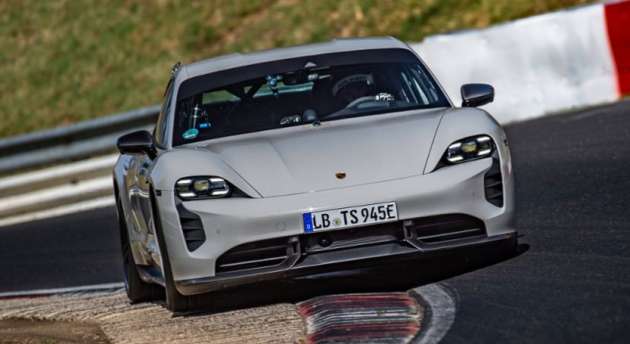 The Porsche Taycan Turbo S has just claimed the throne for being the fastest electric vehicle to lap the 20.8-km version of the Nurburgring Nordschleife in in 7:33.350 minutes.

Driven by Porsche development driver Lars Kern, the electric sports sedan was enhanced with a new performance kit by Porsche Tequipment. The kit consists of 21-inch RS Spyder wheels wrapped in Pirelli P Zero Corsa tyres. The compound of the tyres are similar to that of racing tyres, and is primarily designed for track-driving.

Also new in the Taycan Turbo S used for the record-breaking feat is a software update to the Porsche 4D Chassis Control system to suit the chassis with the new sports tyres. The system analyses and synchronises the Taycan’s Porsche Dynamic Chassis Control (PDCC) in real time.

Porsche noted that while owners can switch back to standard road tyres at any time, it is not necessary to restore the original chassis software. The new performance kit is only available in Germany, for 2023 model year Taycan Turbo S models. “In the past, only thoroughbred super sportscars got into the 7:33 range. With the new performance kit, I was able to push even harder, and the car was even more precise and agile,” said Kern.

Aside from the performance kit and software update, the Taycan Turbo S was also fitted with a roll cage and racing seats, as required by regulators. The record-setting Taycan was confirmed to be a standard production vehicle as it weighed the same as the series production car, TÜV Rheinland confirmed.

The record for EVs was previously held by the Tesla Model S Plaid, with a time of 7:35.579 on a complete lap. Tesla however, also claimed a time of 7:30.909 from the same attempt although this was achieved on the shorter version of the Nurburgring that doesn’t include the straight section at turn 13.

Although Porsche had previously marked the arrival of the Taycan in 2019 with a record attempt in 2019, it was never made official as it was done on the shorter course.