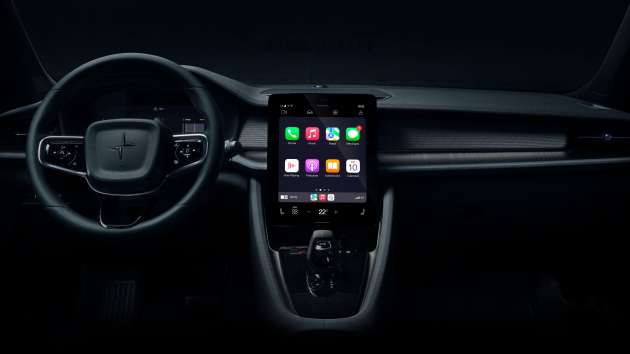 Polestar was one of the first carmakers to adopt Google’s Android Automotive OS (AAOS) for its infotainment system, with the Polestar 2 being the first model to receive it. Despite its partnership with the tech giant, Polestar hasn’t forgotten about those on the iOS side of the platform wars and recently announced that the Polestar 2 will support Apple CarPlay.

This is made possible via an over-the-air software update being pushed out to cars, allowing Polestar 2 owners with an iPhone to use CarPlay on the vehicle’s 11-inch portrait-orietned touchscreen, with all functions intact.

The upshot of the latest OTA update is Polestar 2 owners will essentially get the best of many worlds, with AAOS being the base system for vehicle functions and with the Google ecosystem deeply integrated. On top of that, there’s Android Auto for those who prefer not logging into their car’s infotainment, and now, CarPlay for iOS users.

Polestar has said it will support the next generation of CarPlay, which was previewed by Apple earlier this month. This could debut in a future vehicle or be rolled out to existing models via another OTA update, but it’ll be interesting to see how the company handles things as the next iteration of CarPlay basically takes over every display inside the car.

While the Polestar 2 isn’t officially sold in Malaysia, AAOS can be found in the latest Volvo XC60 facelift as well as the XC40 Pure Electric. Volvo hasn’t announced CarPlay support for its cars with AAOS yet, but it’s likely an update for it will be pushed out.