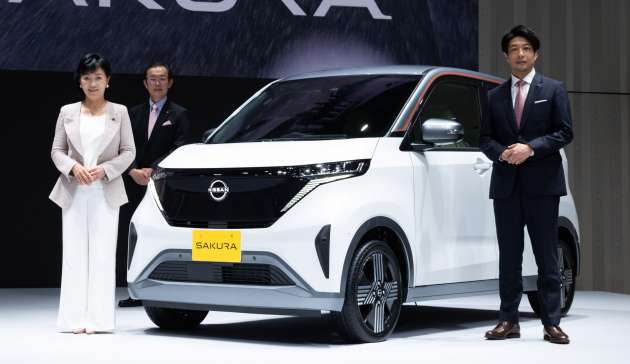 Back in 2019, Nissan showed off the IMk Concept that previewed a future kei car featuring a fully electric powertrain. Well, fast forward to today, and the carmaker has delivered such a model by introducing the all-new Sakura.

However, with Japan’s clean energy vehicle subsidy scheme, the Sakura will actually be priced from approximately 1.78 million yen (RM60,965), so it’s not too far off its internal combustion engine counterparts. 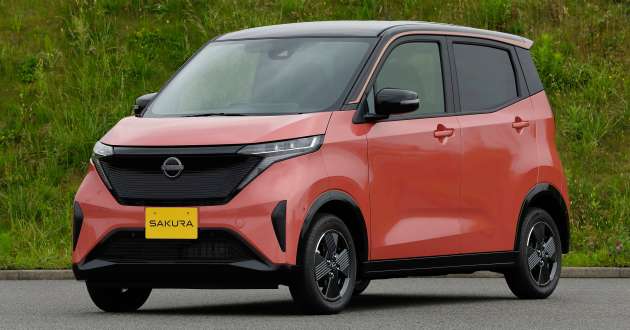 Regardless of variant, the Sakura features an underfloor-mounted 20-kWh, 350-volt lithium-ion battery that powers an MM48 electric motor driving the front wheels. The motor is rated at 64 PS (63 hp or 47 kW) – in keeping with kei car regulations – and 195 Nm of torque, allowing for a top speed of 130 km/h. Three drives modes are offered – Eco, Standard and Sport – plus drivers will also be able to use e-Pedal Step, which is a system for one-pedal driving.

As for charging, the company says that when the battery warning light is illuminated to signal a low state of charge, it takes eight hours to fully recharge the battery to 100% using a 2.9-kW AC input (Type 1 connection), or about 40 minutes to get to 80% with a 30-kW DC input (CHAdeMO connection).

The battery can also be used as a mobile power source during emergencies and provide a day’s worth of electricity to a home, assuming you don’t need more than 12 kWh per day, which is the average power consumption for general households in Japan. 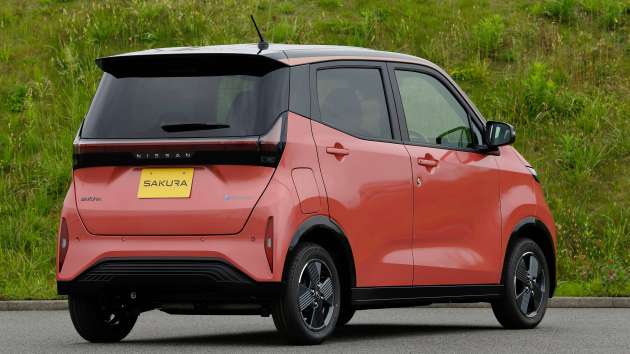 Design-wise, the Sakura looks a lot like the IMk before, albeit slightly pared down as is the case with most production cars that transition from concept. Up front, there’s a closed-off grille with an insert featuring many horizontal lines that blend into the ice hockey stick-shaped DRLs and slim headlamps.

Meanwhile, the front bumper sports a large, trapezoidal-shaped intake and black angular sections at the corners that house parking sensors. Down the sides, we find a window line that rises towards the C-pillars and a generally boxy shape. The 14- and 15-inch wheels available are also highly reminiscent of what was fitted to the concept and takes inspiration from the Japanese mizuhiki decorative knots.

At the rear, a wide-width light bar links the small taillight clusters, just above a black trim piece with the Nissan script. The bumper here mimics what you saw at the front, with angular trims at the corners and the bottom portion. 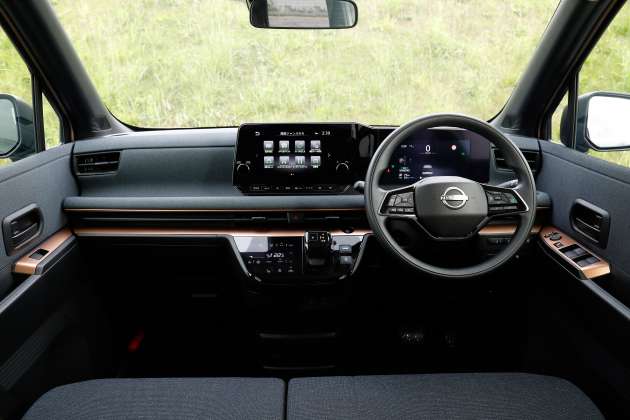 Like the exterior, the interior of the Sakura is also clearly derived from the IMk. You get a two-spoke steering wheel, a front seat bench and a “shelf” on the dashboard with a small storage slot under the rightmost air vent.

This “shelf” separates the upper two screens for the centre air vents, the latter made to look like the stretch the width of the dash, while beyond that, copper-coloured trim visually connects to the “floating” window/side mirror controls on either side. Look closely around the cabin and you’ll find quite a few Sakura motifs as well.

As for other points of interaction, the gear shift lever and climate controls get their own dedicated console, with USB ports and a stowage underneath. There’s also the large nine-inch touchscreen infotainment system that supports Android Auto and Apple CarPlay, placed beside a seven-inch digital instrument cluster.

The Sakura comes with Nissan’s ProPILOT driver assistance system, so features like adaptive cruise control, front collision warning with automatic emergency braking and lane keep assist are present. As a first for a kei car, it also gets the ProPILOT Park system to assist drivers by automatically parking the vehicle for them.

Finally, the Sakura comes in 15 body colours, including four two-tone options, while the interior colours include black, beige and blue grey.