The Volkswagen Arteon has been given a mid-cycle refresh, adding a new Shooting Brake model, a PHEV powertrain and a range-topping R variant 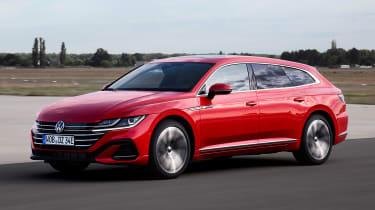 A facelifted version of the Volkswagen Arteon has been launched, with a new Shooting Brake estate variant, a PHEV powertrain, and a 316bhp R-badged performance model joining the line-up. The revised Arteon will go on sale in the UK in autumn, with first deliveries expected before the end of the year. Prices will be confirmed nearer to the model’s launch.

The Arteon’s biggest change comes with the introduction of a new Shooting Brake estate option, which will be offered alongside the hatchback. Volkswagen says that everything from the Shooting Brake’s B-pillar rearwards is new, with the more practical roofline bringing different quarter-light windows, a fresh tailgate and updated rear lights.

The Arteon Shooting Brake is a little more spacious inside than the hatchback, with 11mm of extra headroom up front, and 48mm more headroom in the rear. Boot capacity is also improved over the standard car, with 590 litres of space with the rear seat in place, or 1,632 litres with the seats stowed.

Alongside the new Shooting Brake estate, Volkswagen has added a pair of new engines. The first is a plug-in hybrid powertrain comprising a turbocharged 1.4-litre four-cylinder petrol engine, an electric motor and a 13.7kWh battery pack. The hybrid’s maximum output is 215bhp, and it can officially travel up to 34 miles in electric-only mode. 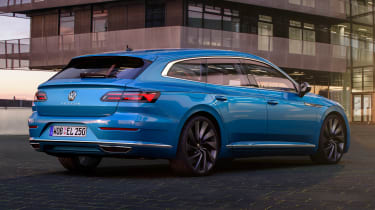 Volkswagen has also introduced a new R performance variant of the Arteon, which is available in hatchback and Shooting Brake body styles. The R is powered by a detuned version of the turbocharged 2.0-litre four-cylinder petrol engine destined for the upcoming Golf R. For the Arteon R, the engine produces 316bhp and 420Nm of torque and is mated to a four-wheel drive system, which can send 100 percent of the engine’s power to one wheel if required.

To complement the extra power, the Arteon R receives a few extra mechanical and cosmetic upgrades over the standard car. Chassis tweaks include lowered sports suspension and adaptive dampers, while the R gets 20-inch alloy wheels, as well as 18-inch disc brakes with fixed four-piston calipers up front, and floating single-piston calipers at the rear.

In addition, R-badged models get a more aggressive body kit with a broader front splitter, a deeper rear diffuser and a new quad-exit exhaust. Inside, buyers get a unique pair of nappa-leather-trimmed sports seats, a new sports steering wheel and R-specific graphics for the car’s infotainment system and digital gauge cluster. 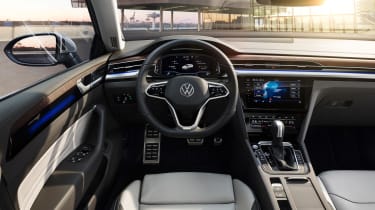 Every version of the new Arteon features a 10.25-inch digital instrument cluster, although buyers can opt for either an eight-inch or 9.2-inch infotainment system, both of which offer voice control. Finally, Volkswagen has introduced a new feature which allows the driver to use their smartphone to unlock and start the vehicle.

The rest of the Arteon’s engine lineup is identical to the pre-facelifted model, with buyers offered either a range of turbocharged 2.0-litre four-cylinder powertrains. In addition to the R model, buyers can have either a 187bhp or 276bhp petrol engine. The former sends drive to the front wheels via a six-speed manual gearbox, while the latter features a seven-speed DSG dual-clutch automatic, together with four-wheel drive.

Volkswagen’s 2.0-litre four-cylinder diesel engine remains available with either 148bhp or 197bhp. The less powerful model can only be specified with front-wheel drive, while the latter is offered with four-wheel drive; both engines feature the seven-speed DSG as standard.

There’s also some extra driver assistance technology, including Volkswagen’s new “Travel Assist” driving mode, which the firm says has been designed for long-distance journeys. Under the driver’s supervision, the system can assume control of the vehicle’s steering, acceleration and braking on the motorway or highway, at speeds up to 130mph.

Buyers also get a rear view camera, a road-sign recognition system, lane-keeping assist, parking assist, autonomous emergency braking with a pedestrian monitoring system, and emergency assist, which can bring the Arteon to a controlled halt if the driver is unresponsive.

What do you make of the new Volkswagen Arteon Shooting Brake? Let us know in the comments section below…