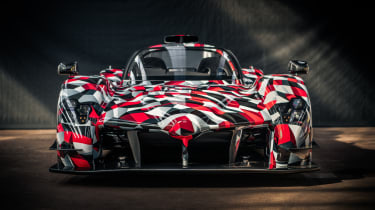 Toyota is yet to confirm the GR Super Sport’s official launch date, but given that the World Endurance Championship regulations require all homologated cars to be built within two years of the start of the competition, we expect the finished model will go on sale by 2023.

When it eventually arrives, Toyota’s hypercar will share a proportion of its components with the firm’s victorious TS050 LMP1 racer – including a more aggressive version of its V6 petrol-hybrid powertrain. It’ll also provide competition for the latest batch of race-derived road rockets, such as the Mercedes-AMG One and Aston Martin Valkyrie.

The project was first unveiled at the 2018 Tokyo Auto Salon and – with the exception of this latest mule’s new targa-top and roof scoop – its styling hasn’t changed much over the concept car. There’s a subtly redesigned nose, a slightly less aggressive front splitter and a pair of low-mounted exhausts in place of the concept’s top-exit units.

The Toyota GR Super Sport will feature a similar twin-turbocharged 2.4-litre petrol-hybrid powertrain to the company’s race-winning TS050 LMP1 hypercar. The petrol engine is assisted by an electric motor and sends its power to the rear wheels, while the front wheels are driven by two separate electric motors.

Its drivetrain will also likely be similar to the LMP1 racer, sharing the same sequential gearbox. Toyota is expected to pull some of the harshness out of the racer’s chassis, however, in an effort to make the hypercar more usable on the road. 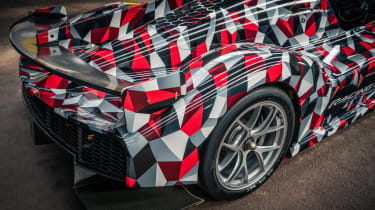 The race-spec GR Super Sport is limited to 750bhp, which is a stipulation of the “Hypercar” series’ regulations. However, Toyota has confirmed that the TS050’s powertrain can be “turned up” to 1400bhp by increasing the amount of power the batteries supply to the motors – giving scope for the road-going version to feature a four-figure horsepower unit.

This isn’t the first time that Toyota has dabbled with the idea of building a production version of a prototype racer, either. Back in 1998, when Toyota raced the GT-One (TS020) at Le Mans, the company created a road-going concept – and had plans to build a handful of production models.

In the end, though, only two models were homologated for road use – one of which is on display at Toyota Motorsport’s headquarters in Germany.

Are you excited to see the new Toyota GR Super Sport compete at Le Mans. Let us know in the comments section below…

Related posts:
Former Inter Milan chief hired by Racing Point | Planet F1
Le Mans 24 Hours: Toyota ‘surprised’ by early Rebellion pace
Best News
Retro-Inspired Mitsuoka Buddy Crossover Already Sold Out Until 2023
11/30/2020
FBI: No crime committed as ‘noose’ rope was there in 2019
06/23/2020
Why VW Pulled The Plug On A 400bhp VR6 Arteon R
06/23/2020
2021 Kia Grand Carnival breaks cover – solid looker! – paultan.org
06/24/2020
New Volkswagen Arteon Shooting Brake arrives as part of facelifted line-up
06/24/2020
Recent Posts
This website uses cookies to improve your user experience and to provide you with advertisements that are relevant to your interests. By continuing to browse the site you are agreeing to our use of cookies.Ok