New Peugeot 3008 ups its game with design and tech tweaks

This is the facelifted Peugeot 3008, a revamped version of the family SUV that kick-started the French manufacturer’s current boom period when it was first revealed in 2016.

This is a mid-life update for the 3008, but while the exterior changes and mechanical revisions are relatively minor, there are significant updates to interior finishes and equipment.

On the outside, the 3008’s chunky looks remain, but there’s a new frameless front grille, redesigned headlights that feature LED technology on even the entry-level versions, and new full-LED tail-light clusters that have smoked glass to fool the eye into thinking that the black boot lid is wider than it really is.

There are a couple of new paint colours available – Celebes Blue and Vertigo Blue – as well as a new Black Pack that will bring darker finishes on almost a dozen of the car’s details, along with a special design of 19in alloy wheels. It’ll be offered on the range-topping GT and GT Pack editions of the car. 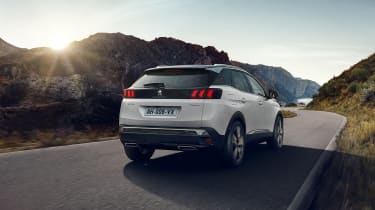 There are more substantial upgrades in the cabin – notably in infotainment. The 12.3-inch fully digital instrument panel – a stand-out feature on this generation of 3008 – gets a different display that shows better contrast and darker blacks, making it clearer and easier to read.

The central touchscreen is now a 10in unit and higher definition than before. It has seven ‘piano key’ buttons beneath it, allowing direct access to key functions. There are now two USB sockets in the second row and one in the front, along with wireless smartphone charging.

Depending on trim level, other cabin upgrades include Nappa leather in a couple of different colours, Alcantara lining, a frameless rear-view mirror and a dark lime wood finish.

The 3008 continues to be based on PSA Group’s EMP2 platform, which supports plug-in hybrid tech but not, as yet, fully electric vehicles. As such, the revision version of the car sticks with the same range of powertrains as before – including the two hybrid models that were introduced earlier this year.

The Hybrid4 mixes a 1.6-litre PureTech engine producing 197bhp with a pair of electric motors for a total output of 300PS, or 296bhp. Peugeot claims that the Hybrid4 will have official CO2 emissions of as little as 29g/km, and will be capable of up to 37 miles of pure-electric running. 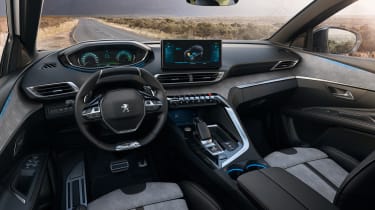 The two-wheel-drive Hybrid has a single electric motor and a total output of 222bhp, along with 30g/km of CO2 emissions and up to 35 miles of pure-electric driving.

In addition to the hybrids, there’s a 1.2-litre three-cylinder PureTech petrol producing 128bhp, a four-cylinder 1.6-litre petrol with 178bhp, and a 1.5 diesel with 128bhp. The standard transmission across most of the range is an eight-speed automatic, although the entry-level petrol is available with that unit or a six-speed manual.

The new 3008 will continue to be produced at Peugeot’s factory in Sochaux, France. It’s likely to go on sale in UK dealers before the end of 2020, with first deliveries expected early next year. There’s no word yet on pricing but we’d expect only a modest increase over the existing versions; that should mean a starting price of around £26,500.