The updated Jaguar F-Pace features an all-new interior, while a new P400e plug-in has joined the range 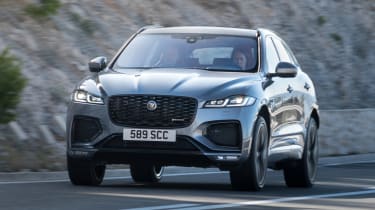 Jaguar’s biggest-selling model, the F-Pace, has been given a thorough overhaul. The British car maker has tweaked its exterior styling, completely redesigned the cabin and introduced new mild-hybrid and plug-in hybrid powertrains.

Visual updates to the new Jaguar F-Pace are subtle, but up front revised LED lights have been added, and they now feature the twin J-shaped lighting signature first seen on the I-Pace, along with an enlarged grille. At the back new LED tail-lamps have also been installed.

Most of Jaguar’s design budget has been spent inside; as the firm’s design director, Julian Thompson, puts it, “Interiors are the new battleground.” The F-Pace’s cabin is almost unrecognisable from the original model’s; a centrally-mounted 11.4-inch curved-glass HD touchscreen sits on the centre of the dash and features Jag’s latest Pivi Pro infotainment system, as well as both Apple CarPlay and Android Auto functionality. 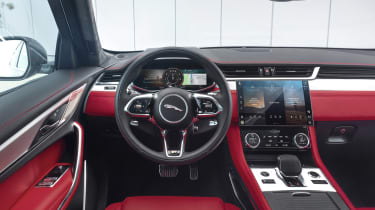 Jaguar says that 90 per cent of all commands can be done within two taps from the home menu. Elsewhere, the top of the dashboard is split into two sections – an upper area that can be finished in wood or aluminum, with a contrasting lower section finished in leather.

The current F-Pace’s rotary drive selector that rises out of the centre console has been ditched in favour of a stubby ‘palm-shifter’ that features cricket ball-like stitching. New door cards have larger storage holders for bottles, while the electric window switches have been moved from the top of the door down towards the grab handles to make them easier to reach.

The engine line-up is all new, too, comprising three diesels, two petrols and a plug-in hybrid powertrain. All cars are four-wheel drive as standard and feature an eight-speed automatic gearbox. 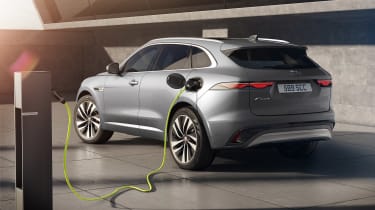 The diesel engines are all 48V mild-hybrid units, and kick off with a 2.0-litre four-cylinder in two states of tune: 161bhp and 202bhp. A 296bhp 3.0-litre six-cylinder is the most powerful diesel from launch; Jaguar claims this model will cover 0-62mph in 6.1 seconds and return up to 38.1mpg.

Topping the line-up from launch is a new P400e plug-in hybrid model, which uses a 2.0-litre four-cylinder turbo petrol, a 17.1kWh battery and an electric motor. The combined system develops 400bhp and 640Nm of torque, and it’s the quickest model in the line-up; Jag says it’ll cover 0-62mph in five seconds. It’s the most efficient model in the range, too, returning a claimed 130.2mpg and CO2 emissions of 49g/km, while a full charge will deliver up to 33 miles of electric range.

What does the new Jaguar F-Pace P400e have to beat? These are the best hybrid SUVs on sale…

Related posts:
'Strange only Max Verstappen has reliability issues'
Ford Mustang Driver Doing Donuts in an Empty Parking Lot Ends Exactly How You'd Expect
Best News
Best hatchbacks to buy 2020/2021
11/25/2020
FBI: No crime committed as ‘noose’ rope was there in 2019
06/23/2020
Why VW Pulled The Plug On A 400bhp VR6 Arteon R
06/23/2020
2021 Kia Grand Carnival breaks cover – solid looker! – paultan.org
06/24/2020
New Volkswagen Arteon Shooting Brake arrives as part of facelifted line-up
06/24/2020
Recent Posts
This website uses cookies to improve your user experience and to provide you with advertisements that are relevant to your interests. By continuing to browse the site you are agreeing to our use of cookies.Ok