Due by the end of 2020, the new Dacia Sandero gets a modern Renault platform and the same low, low price 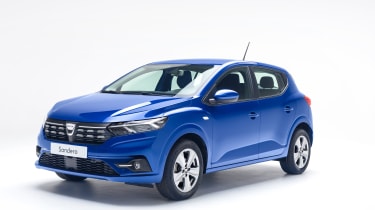 This is the Dacia Sandero, unveiled in detail a few weeks after the Renault-owned brand released a couple of teaser images that showed the new face of what is expected to be the UK’s cheapest new car.

Following years of being based on ageing Clio mechanicals, this Mk4 Sandero switches to the same CMF-B platform as the latest Renault ’mini. But despite that, the new Sandero’s styling is evolutionary, with a Y-shaped LED light signature at the front and a wider track that gives a stronger look.

There’s a more comfortable shape of door handle and, at the rear, the old-fashioned boot release is being kept only on basic editions, with the rest of the range switching to a more discreet electric unit integrated into the lower tailgate. The car is 19mm longer overall than before, at 4,088mm, but noticeably wider, at 1,848mm not including the mirrors.

The new supermini is also being joined by a fresh version of its Sandero Stepway stablemate – but the pseudo-SUV variant gets a more distinct look for this generation, with chunkier body cladding, 16-inch wheels as standard, roof bars that can be turned into a functional roof rack, and proper metal skidplates integrated into the front and rear bumpers. It sits 41mm higher than the regular Sandero.

There’s arguably a bigger shift for both versions of the car inside, where the current basic dashboard has been replaced by an altogether more modern design, featuring fabric finishes on some trim levels.

The cabin has more space than before, with a few extra millimetres of shoulder and elbow room for front passengers, and more than four centimetres of extra kneeroom for those in the rear. Boot capacity is 328 litres, a gain of 18 litres over the old Sandero’s. 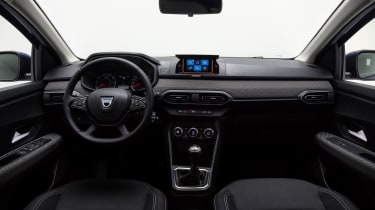 Three infotainment options will be available. The most basic set-up, Media Control, includes a DAB radio and Bluetooth, but no screen; instead, there’s a dock where a smartphone can sit as it runs a Dacia app designed for in-car use.

The other two configurations are based on an eight-inch touchscreen mounted high up on top of the dash. The first, called, Media Display, incorporates Android Auto and Apple CarPlay. The second, Media Nav, has built-in navigation and offers Wifi-based mirroring for smartphones.

The Sandero is being launched with three engines, although the entry point, a 1.0-litre three-cylinder petrol producing just 64bhp and badged SCe 65, will be restricted to the most basic level in the line-up. It comes only with a five-speed manual gearbox. The mainstay of the range will be the TCe 90, an 89bhp three-cylinder petrol. This unit will be available across most trim levels, and in the Stepway – and it will be offered with a CVT automatic gearbox as well as a six-speed manual transmission.

In addition, there’s a dual-fuelled TCe 100 petrol that has an LPG tank situated where the spare wheel would normally be. Dacia claims it emits up to 11 per cent less CO2 than an equivalent pure-petrol model and says that with both fuel tanks filled, it offers a range of more than 800 miles. There’s speculation that Dacia could decide to offer this option to UK customers, but company sources have refused to confirm this.

The switch to a more modern architecture means that Dacia can offer additional kit that’s new to the Sandero and Sandero Stepway. Climate control with a digital display will be available, along with an electronic parking brake, a reversing camera, automatic windscreen wipers and heated front seats. We’ve yet to see final equipment lists for UK variants, though, to establish which of these features will be standard. 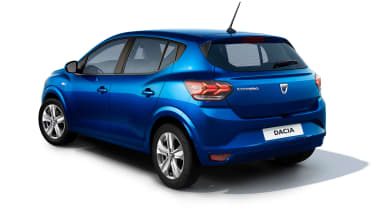 There’s no word yet on Euro NCAP safety ratings – one of the old Sandero’s weakest points. But the modern platform, standard auto emergency braking and the addition of two new airbags (bringing the total to six) could deliver a respectable score. A senior source said, however, that the company is “not going to go for a top rating”.

The new Sandero is due to go on sale by the end of this year, with first deliveries expected in the early months of 2021. UK prices have yet to be confirmed, but Dacia’s marketing director Mihai Bordeanu told us, “It will have an unbeatable price. We know our customers and they want this. The new Sandero will be the best value-for-money offering in the segment.”

Related posts:
Is The All-New Honda e The Ultimate Urban Electric Car?
Why Your Next Pickup Should Be an Electric Truck
Best News