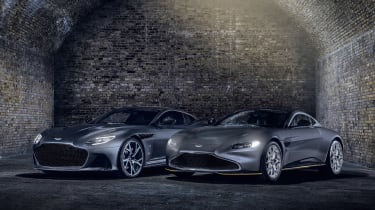 Aston Martin has revealed a pair of new special edition sports cars to mark the release of the 25th James Bond film, No Time to Die.

The Vantage and DBS Superleggera 007 Editions feature a range of unique design alterations and bespoke accessories that are inspired by the modified Aston Martin models driven by Bond on the silver screen.

Production of the Aston Martin Vantage 007 Edition will be limited to 100 units, each example will carrying a price-tag of £161,000. The DBS Superleggera 007 Edition is a little more exclusive and considerably more expensive, with a scheduled production run of just 25 units and a base price of £279,025.

The Aston Martin Vantage 007 Edition shares a similar specification to the Aston Martin V8 which made its on-screen debut in the 1987 film, The Living Daylights. The classic model will also make a cameo in the latest Bond film, No Time To Die.

It’s finished in the same Cumberland Grey paint as Bond’s car and features a different mesh radiator grille, to match the design of the classic Aston Martin V8. There’s also a yellow rear diffuser and front splitter, which Aston Martin says is inspired by the hazard stripes found on the film car’s rockets.

Inside, there’s obsidian black leather upholstery and dark chrome trim, along with some unique “007” branding on the centre console. The seats feature the same fluting as the classic Aston Martin V8, while the Vantage’s carbon fibre seat backs have also been etched with cello F-holes, which pay homage to the soundtrack of the film’s chase scene.

Buyers get a range of dummy gadgets littered around the interior. In the centre console, there’s a laser-engraved plaque which references the movie car’s rocket motor, missiles, lasers and targeting display. The Vantage 007 Edition can also be specced with a set of limited edition skis and a unique ski rack. 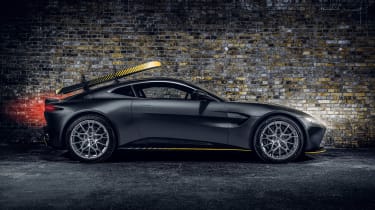 The 007 Edition is powered by a twin-turbocharged 4.0-litre V8 petrol engine, which develops 503bhp and 685Nm of torque – and offers a 0–62mph time of 3.6 seconds and a top speed of 195mph. The special edition model can also be specced with either a seven-speed manual or an eight-speed manual gearbox.

The Aston Martin DBS Superleggera 007 Edition is almost identical to the car driven by James Bond drives in the new film, No Time To Die. It features the same Ceramic Grey paint finish and carbon fibre exterior trim, along with a couple of unique “007” badges and a set of bespoke 21-inch diamond turned alloy wheels.

Inside, there’s black leather upholstery with red contrasting stitching, along with a subtle range of 007 branding on the door cards, centre armrest and rear subwoofer cover. The interior is finished with a unique treadplate, which marks the car’s place in the build series.

The DBS Superleggera 007 Edition is powered by the same twin-turbocharged 5.2-litre V12 engine as the standard model, which develops the same 715bhp and 900Nm of torque. The powertrain is mated to an eight-speed automatic gearbox and provides a 0–62mph time of 3.4 seconds and a top speed of 211mph.

Check out our review of the new Aston Martin DBX here…

Related posts:
Used Renault Megane review
This Fully-Working Tesla Cybertruck Replica Is The Most Convincing To Date
Best News
2021 Hyundai Santa Fe and Subaru Crosstrek Hybrid priced, Pontiac Fiero sold for $90,000: What’s New @ The Car Connection
12/04/2020
FBI: No crime committed as ‘noose’ rope was there in 2019
06/23/2020
Why VW Pulled The Plug On A 400bhp VR6 Arteon R
06/23/2020
2021 Kia Grand Carnival breaks cover – solid looker! – paultan.org
06/24/2020
New Volkswagen Arteon Shooting Brake arrives as part of facelifted line-up
06/24/2020
Recent Posts
This website uses cookies to improve your user experience and to provide you with advertisements that are relevant to your interests. By continuing to browse the site you are agreeing to our use of cookies.Ok