The Mk3 Nissan Qashqai drops diesel in favour of hybrid engines, and our exclusive images preview how it could look 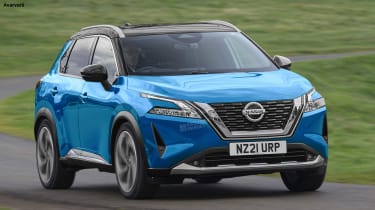 The next-generation Nissan Qashqai will be revealed early in 2021 before going on sale in Europe next summer, equipped with hybrid power for the very first time.

Few cars have made such an impact on a brand’s fortunes than the Qashqai has for Nissan. Since its launch in 2007 the firm has sold more than three million across Europe, and last year the Mk2 model still accounted for 235,000 units across the continent.

It’s also a hugely important car for the UK automotive industry. The Qashqai has been built at Nissan’s Sunderland plant since the model’s introduction, while more Qashqais are made in Britain than any other car. This Mk3 version will be built there, too, as part of a £400million investment in the factory.

But that’s not just the only UK angle; the new Qashqai has been designed by Nissan Design Europe, based in London, while development is taking place at Nissan’s Technical Centre for Europe, in Bedfordshire.

The first official images show prototype Qashqais in the final stages of the SUV’s development cycle, and hint at the final design ahead of next year’s debut.

As with the Juke and the next-generation X-Trail – already revealed in the United States in the form of the latest Rogue – a big design overhaul is expected inside and out. For now Nissan has left things to our imagination only, but our exclusive images preview how the new Qashqai could look when the covers finally come off.

Inspiration is likely to be taken from a combination of the sportier look of the new Juke, and from the IMQ concept revealed at last year’s Geneva Motor Show. So we expect that the front end will be defined by the brand’s new V-shaped grille, alongside horizontal V-shaped headlights.

New surfacing and stronger lines down the sides will give the new Qashqai a more imposing stance, while the rear end has a more rakish look to it, with strong horizontal headlights beneath a steeper rear window.

The overall size does increase slightly, but Nissan is keen to claim that the new car has a very similar footprint to the Mk2 model. Importantly, the wheelbase has been extended by 20mm for additional rear legroom, while the Qashqai is a little taller now, too. A 450-litre boot means that it’s also more practical than before.

While the final design has still yet to be revealed, the manufacturer has confirmed plenty about the mechanicals underpinning the third-generation car.

The new Qashqai moves on to the latest version of the Renault-Nissan-Mitsubishi Alliance’s CMF-C platform, which is an updated version of the current vehicle’s underpinnings. It uses more ultra-high- strength steel than before, is lighter, better at absorbing impacts and is 41 per cent stiffer than before. Nissan says drivers will feel these changes behind the wheel, because alongside improvements to comfort and safety, engineers are targeting a Qashqai that’s better to drive than before, too.

To that end, the suspension has been updated with reprofiled MacPherson struts front and rear. On all-wheel-drive versions riding on 20-inch wheels, multi-link rear suspension will be standard in place of a torsion beam. Nissan has also worked on the steering system, claiming improved responsiveness and better road feel.

It’s under the bonnet where things really change for the new car, however. Diesel is completely off the menu, with a slimmed-down engine line-up consisting of a 1.3-litre petrol engine available in two power outputs and with 12-volt mild-hybrid assistance, plus a new hybrid model.

The 1.3-litre mild-hybrid engine is available with 136bhp or 153bhp, and buyers are offered a choice of a manual or CVT automatic transmission; the CVT cars will also be available with all-wheel drive.

Technical details for the e-Power hybrid remain under wraps, but it’ll produce 185bhp. A petrol engine is used to charge a battery powering an electric motor set-up, rather than power the wheels. A plug-in hybrid version of the Qashqai won’t be coming, though, with Nissan prioritising e-Power tech and all-electric vehicles such as the new Ariya, the Qashqai’s electric sibling.

Elsewhere, the Qashqai will be upgraded to the brand’s latest standards in terms of semi-autonomous driver aids. The ProPilot system being readied for the next Qashqai boosts the pre-existing steering, acceleration and braking assistance with navigation data, slowing for corners. It can also read road signs for changes in the speed limit and adjust the cruise control accordingly.

A ‘flank protection’ feature works with the blind-spot monitoring system. If the driver tries to turn in on someone, the steering will automatically intervene.

Described as the man responsible for “driving the future line-up” for Nissan’s European operations, Fioravanti’s job is to determine what cars the manufacturer sells.

Q: Why have you decided to drop diesel power for the next-generation Qashqai?

A: “In the region we have already communicated our intention to progressively discontinue the diesel offering in line with the renewal of our models. With e-Power, we are overly confident that our customers will be much more seduced by this offer. We can definitely convert with this offer.”

Q: Why did you decide against introducing a plug-in hybrid version of the new Qashqai for European buyers?

A: “We have within the Alliance the technology, but we are very confident that e-Power technology is going to differentiate us from the rest of the competition.”

Q: Could you be tempted to expand the Qashqai’s horizons into new derivatives, such as coupé-SUVs?

A: “At the moment we don’t see the need. We are very focused on this current concept. The Qashqai is functional and practical, but dynamic. The customer base is already wide.”

Q: Do you intend to introduce a performance version of the latest Qashqai? Could you use the Nismo brand?

A: “I cannot confirm anything to you, but the Qashqai is our key model in Europe and we are not closing any doors. The life cycle is going to be long and we have a lot of good intention and ability within Nissan; we are enthusiastic because this is not the end of the story. I’m pretty sure we are going to surprise you in the future.”

Keen to find out more about electrification? Get the latest electric car news and reviews on our sister site, DrivingElectric.com…

Related posts:
VW Gets Commercial Vehicle Factory To Build Electric Cars Too
Limited edition Morgan 3-Wheeler marks end of production run
Best News
Car tax changes: One percent increase could see costs rise by almost £400 within months
11/29/2020
FBI: No crime committed as ‘noose’ rope was there in 2019
06/23/2020
Why VW Pulled The Plug On A 400bhp VR6 Arteon R
06/23/2020
2021 Kia Grand Carnival breaks cover – solid looker! – paultan.org
06/24/2020
New Volkswagen Arteon Shooting Brake arrives as part of facelifted line-up
06/24/2020
Recent Posts
This website uses cookies to improve your user experience and to provide you with advertisements that are relevant to your interests. By continuing to browse the site you are agreeing to our use of cookies.Ok