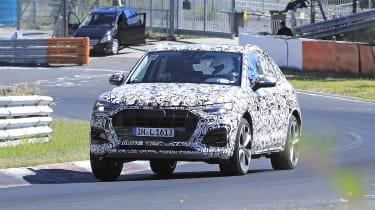 Audi will challenge the likes of the Mercedes GLC Coupe and BMW X4 with the release of a large coupe-SUV of its own in 2020, called Q5 Sportback.

The newcomer will feature most of the revised Q5’s cosmetic and technology upgrades, along with a new sloping roofline and a redesigned tailgate inspired by the firm’s flagship Q8 SUV.

Our spy photographers have spotted the new Q5 Sportback again, this time taking on handling tests at the Nurburgring.

Like the standard Q5, Audi’s new Sportback model should also feature new LED headlamps, a revised front bumper with larger intakes and slightly narrower radiator grille. At the rear, the lighting system should have a similar design to the standard car’s, but modified to suit the needs of the reprofiled tailgate.

Hotter S and RS versions in the range will also gain an Audi A1-style triple-vent design at the leading edge of the bonnet, which pays homage to the original Quattro coupe, along with a more aggressive body kit, larger alloy wheels and tailgate spoiler.

The Sportback’s interior will be transferred wholesale from the standard facelifted Q5. As such, equipment will include heated front sports seats, three-zone climate control, cruise control, a larger 10.1-inch touchscreen infotainment system and a new storage bin in place of the old car’s rotary control knob. 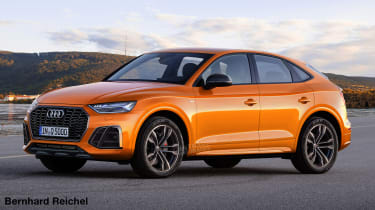 Like all Volkswagen Group products, the Q5 Sportback’s options list will be extensive. Buyers will be offered a customisable interior ambient lighting pack, a head-up display and an updated version of the Audi’s 12.3-inch digital gauge cluster, which the firm says has 10 times the computing power of the unit fitted to the old Q5.

As the facelifted Q5 and new Q5 Sportback will both share the same MQB underpinnings, the latter will benefit from the former’s upgrades. UK buyers should have a choice of three powertrains – all of which will be mated to Audi’s quattro all-wheel drive system and feature some form mild-hybrid technology.

The entry-level model will be powered by an improved version of the standard SUV’s 2.0-litre four-cylinder diesel engine which, thanks to a new belt-driven integrated starter-generator mild-hybrid system, will produce 201bhp and 400Nm of torque. For the standard Q5, Audi also fitted a lighter aluminium crankcase and a lighter crankshaft, shaving 22.5kg of weight off the engine – and these revisions will be carried onto the Sportback model.

Buyers should also receive an improved version of Audi’s turbocharged 2.0-litre four-cylinder 45 TFSI petrol unit. The powertrain will be fitted with the same mild-hybrid technology, which has increased the unit’s power figure from 242bhp to 261bhp.

Finally, Audi’s forthcoming flagship SQ5 Sportback will feature an upgraded version of the same 3.0-litre V6 petrol engine found in the old SQ5 SUV. It’ll be fitted with a more potent 48-volt mild-hybrid system, which should offer an improvement over the conventionally driven unit’s 349bhp output – although official performance figures are yet to be confirmed.

What do you make of the upcoming Audi Q5 Sportback? Let us know in the comments section below…