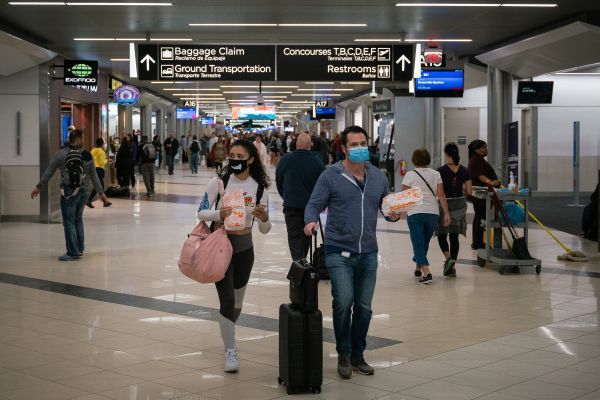 Flyers at Hartsfield-Jackson Atlanta International Airport wearing facemasks on March 6th, 2020 as the COVID-19 coronavirus spreads throughout the U.S.

Photo via Wikimedia and Flikr/Chad Davis.

In rationalizing the downgrades, Moody’s first cited the severe drop in demand and “the heightened uncertainty around ABCR's ability to honor its full lease payment obligation.”

“The car rental sector has been one of the sectors most significantly affected by the coronavirus-driven credit shock given its heavy dependence on air travel and on the sale of used vehicles,” Moody’s stated. “While conditions in the used car market are presently constructive, air travel has fallen precipitously.”

As a result, Moody's stated it believes that the likelihood of ABCR affirming its lease payment obligation in its entirety in the event of a Chapter 11 bankruptcy has decreased; that the uncertainty in the values of used vehicles and therefore its “value haircut” being applied to non-program vehicles upon ABCR's default has increased, at the same time that the percentage of program vehicles will likely decrease further owing to Avis’s efforts to continue de-fleeting.

If ABCR were to file for bankruptcy, Moody's stated it continues to assume that the company would be more likely to reorganize under a Chapter 11 filing, as a reorganization would likely realize significantly more value as an ongoing business concern than a liquidation of its assets under a Chapter 7 filing.

Moody's view considers the strength of the Avis Budget brand and the expected eventual recovery of the rental car industry. However, Moody's stated it “now believes that there is a lower likelihood that ABCR will accept its lease payment terms in its entirety in the event of a Chapter 11 bankruptcy.”

While Moody's recognizes the company's lease payment obligations are high, considering the relatively low utilization of the fleet and Avis’s need to continue to de-fleet in the second half of 2020. Avis Budget Group has historically operated at utilization rates near the 70%-80% range, Moody’s noted.

Moody's expects Avis to continue executing on its plan to reduce the size of its rental fleet in response to the pandemic, notably the continued severe downturn in global air travel, while increasing fleet utilization to turn cash flow positive in the second half of the year. “The severe drop in air travel will contribute to a sizable cash outflow as ABCR contends with the unprecedented sharp drop in rental demand, and the need to rapidly reduce the size of its car rental fleet,” Moody’s stated.

Though the used car market has shown strength recently, Moody’s cited “a potential oversupply stemming from several rental car companies continuing to de-fleet in the coming months, including the distressed condition and evolving fleet disposition strategy of another large market player in the sector which could be disruptive to the pricing in the used car market.”

Moody's noted that a significant portion of ABCR's rentals depend on travel, both business and leisure at on-airport and off-airport retail locations. “Global air passenger demand will likely remain severely depressed in 2021 and a substantial recovery before 2023 appears unlikely,” Moody’s stated.

Moody's expects global air travel to contract by approximately 70% during 2020, and 2021 passenger travel to fall 35% to 55% below those of 2019. In the meantime, Avis has begun to de-fleet in a measured manner and continues to execute on its de-fleeting strategy. In the second quarter of 2020, ABCR reduced its fleet size by 8% from the first quarter.

Moody's expects Avis to maintain a lower percentage of program vehicles moving forward. The fleet composition has shifted to a lower portion of program vehicles at 13.3% as of May 30, down from 29.1% a year earlier. In recent months, Moody’s stated “Avis has breached a concentration limit pursuant to the ABS master trust governing document requiring at least 85% of non-program vehicles.”

Moody's downgraded these ratings and placed them under review for further downgrade on April 27 and concluded the review on July 10.